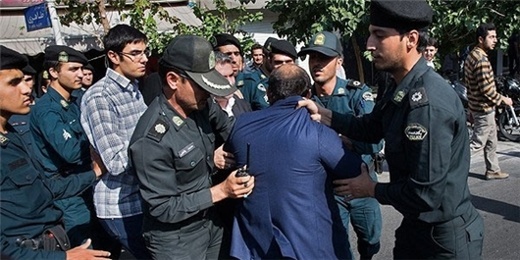 Iran’s police have arrested several people to prevent a protest rally against the reopening of the British embassy reopening.

Several protestors were arrested in front of the British embassy in Tehran which was reopened on Sunday morning in the presence of Foreign Secretary Phillip Hammond.

A number of Iranian people and students who wanted to hold a peaceful gathering to protest at the reopening of the British embassy in small groups were arrested by the law enforcement police forces in front of the British mission in Tehran today.

The streets near the embassy compound were heavily guarded since early morning by the special police and law enforcement troops who dispersed the people to avoid any protest gathering.

Many Iranian university students formations, political figures, officials and elites had slammed the reopening of the British Embassy, and called for a gathering in front of the mission to protest at what they called as ‘Black Sunday’.

Relations between Iran and Britain hit an all-time low in November 2011, when the two countries shut down their diplomatic missions.

Iran recalled all its staff and closed its embassy in London in November after Britain recalled its diplomatic mission in Tehran due to massive protests in front of the British embassy complex by thousands of Iranian students who demanded ties with London be severed.

The Iranian students’ November protests at the British mission came after the Iranian legislators in an open session of parliament in November approved a bill to downgrade relations with Britain. After parliament’s approval, Iran expelled the British ambassador from Tehran.

The parliament approval came a week after the US and Britain targeted Iranian financial sectors with new punitive measures, including sanctions on the Central Bank of Iran (CBI) and petrochemical industry.

The sanctions against the CBI and Iran’s petrochemical industry were adopted in a unilateral move by the US, Canada and Britain outside the UN Security Council as other council members, especially Russia and China, had earlier warned against any fresh punitive measure, including sanctions, against Iran.