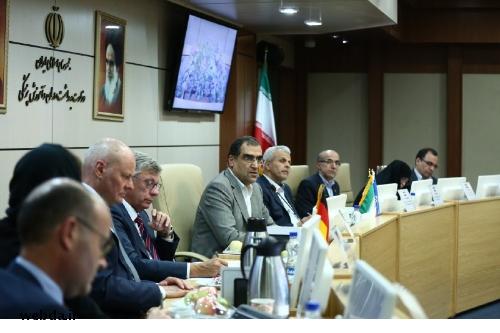 Iranian health minister says the country is ready to promote its cooperation with Germany to develop modern technologies and create job opportunities in Iran’s health sector.

Speaking in a meeting with the officials of Germany’s Federal Ministry of Health, he added the Western European country has always been a familiar and long-standing partner of Iran, expressing the hope that the two sides could also form an effective partnership in the field of health.

According to a Farsi report by the Arya News Agency, Qazizadeh Hashemi said, “I am confident that our German friends are familiar with Iran’s relative capabilities in the fields of medical sciences and services as well as health network.”

“Medical sciences in Iran are merged with the country’s system for providing health services, meaning that our higher education has become a part of the Ministry of Health. Each year, a total of 200,000 students study medicine in Iranian medical faculties.”

The minister added the two countries have close cooperation in the fields of producing foodstuff and medicines as well as providing hospital services, particularly in medical equipment industry.

This is because the history of cooperation between Iranian and German companies dates back to half a century ago, he said.

Qazizadeh Hashemi said what took place following the going into effect of the nuclear deal between Tehran and world powers can prepare the ground for increased relations between Iranian and German companies during President Rouhani’s second term in office.

He also noted the Islamic Republic welcomes joint investments and ventures with Germany to develop modern technologies and create job opportunities as well as market in Iran’s health sector.