Iran Urges EU to Stand against US’ Illegal, Illogical Move 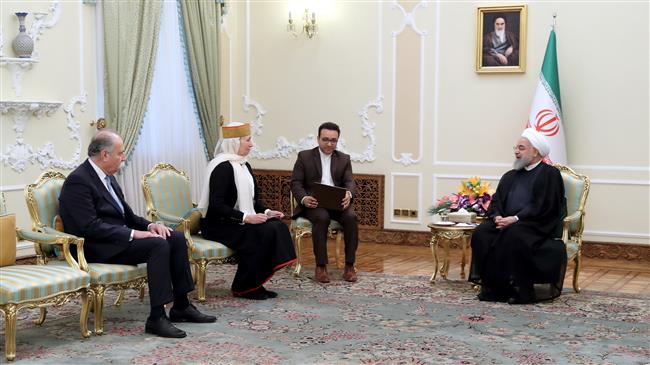 Iranian President Hassan Rouhani says all countries, particularly member states of the European Union, must stand up to the United States' "illegal and illogical" move to withdraw from a key nuclear agreement Tehran signed with major world powers in 2015.

“Iran can stay in the JCPOA (the nuclear deal, officially known as the Joint Comprehensive Plan of Action) only if it fully benefits from it,” Rouhani said while receiving the credentials of Estonia’s accredited Ambassador to Tehran Marin Mõttus on Tuesday.

He warned that in an “illogical and illegal” move, the US seeks to apply its domestic laws to other parts of the world.

US President Donald Trump announced on May 8 that Washington was walking away from the JCPOA, which was reached between Iran and the five permanent members of the UN Security Council — the US, Britain, France, Russia and China — plus Germany.

Iran has said it would remain in the JCPOA for now, pending negotiations with the other signatories in the coming weeks before making a final decision on its future role in the agreement. Tehran wants the Europeans to give it clear-cut guarantees about fulfilling their obligations if it remains in the accord.

In a letter written to the United Nations Secretary General Antonio Guterres on May 10, Iranian Foreign Minister Mohammad Javad Zarif said the US president’s “unilateral and unlawful” decision to withdraw from the JCPOA and to re-impose nuclear-related sanctions shows “a complete disregard for international law.”

“These acts constitute a complete disregard for international law and the United Nations Charter, undermine the principle of peaceful settlement of disputes, endanger multilateralism and its institutions, indicate a regress to the failed and disastrous era of unilateralism, and encourage intransigence and illegality,” Zarif said in the letter published on Monday on the website of the Iranian Foreign Ministry.

Zarif launched a diplomatic tour early on Sunday designed to try and rescue the nuclear deal. He began the visit on President Rouhani’s order to sound out Europe and other parties to the JCPOA about the possibility of keeping the deal in place.

The Iranian foreign minister held talks with his Chinese and Russian counterparts Wang Yi and Sergei Lavrov, respectively, in Beijing and Moscow over the past two days.

In a meeting with the Chinese foreign minister, Zarif said he seeks a “clearer image” of the future of the key nuclear agreement after the US withdrawal.

He expressed hope that with this visit to China and other countries within the next two days, the sides would be able to depict a clearer vision of the nuclear deal’s future.

At the start of a meeting with Lavrov on Monday, the top Iranian diplomat said he wanted “assurances” from the JCPOA’s signatories that Iran’s interests would be fulfilled.

“The final aim of these negotiations is to seek assurances that the interests of the Iranian nation will be defended,” Zarif said.

Zarif on Tuesday met EU foreign policy chief Federica Mogherini ahead of evening talks with his counterparts from Britain, France and Germany. The three European signatories to the JCPOA have expressed their determination to preserve the landmark Iran nuclear deal.

The Iranian president also said on Tuesday that the US decisions to exit the JCPOA and relocate its embassy in Israel from Tel Aviv to Jerusalem al-Quds were “very incorrect and inaccurate” and would further isolate Washington.

Rouhani made the remarks in a meeting with New Zealand’s new Ambassador to Tehran Hamish MacMaster, who submitted his credentials to the Iranian president.

He emphasized that the two US decisions were a “big and historic mistake” taken despite the international community’s opposition.

The United States on Monday officially announced the opening of its new embassy in Jerusalem al-Quds amid deadly Israeli crackdown on peaceful protests by Palestinians in the occupied territories and warnings from around the world that the measure risks triggering a fresh wave of violence in the Middle East.

The Iranian foreign minister on Monday lashed out at the Israeli regime for pursuing a repressive approach to peaceful protests by Palestinians demanding their right to return to their motherland.

Taking to his official Twitter page on Monday, Zarif took Israel to task for “massacring countless Palestinians in cold blood as they protest in world’s largest open air prison,” in what was a direct allusion to the situation of the Palestinians who live under years-long Israeli blockade in the Gaza Strip.

Trump recognized Jerusalem al-Quds as the “capital” of Israel in December last year, promising to relocate the US diplomatic mission from Tel Aviv to the city.

The decision sparked outrage among Palestinians, who deem Jerusalem al-Quds as the future capital of a Palestinian state.

The New Zealand’s diplomat, for his part, said the Iran nuclear agreement was the victory of diplomacy and cooperation over confrontation and the most important diplomatic achievement in history.

He also stressed the importance of strengthening mutual relations in all fields, particularly in the economic sector.