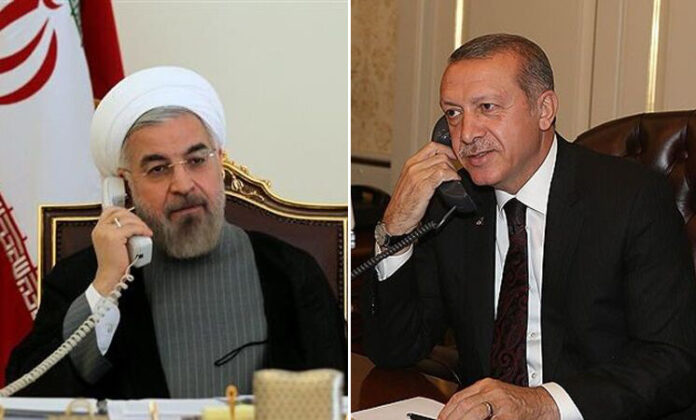 Speaking in a Sunday phone conversation with his Turkish counterpart Recep Tayyip Erdoğan, President Rouhani hailed as “good and developing” the relations between Iran and Turkey, as two important and influential countries in the region.

He stressed the need to strengthen Tehran-Ankara cooperation and relations in addressing common threats as well as to resolve regional issues.

President Rouhani expressed his support for Turkey against US sanctions, and stressed, “The only way to counter the United States’ unilateral and illegal actions is unity and empathy of the countries under its sanctions.”

Emphasising the need to increase trade and economic relations between the two countries by amending the preferential trade agreement, the Iranian president stated that the implementation of the agreements of the sixth meeting of the Iran-Turkey High Cooperation Council is important.

He also expressed Iran’s readiness to host the 28th meeting of the Joint Commission in the near future.

Referring to the illegal behaviour of the previous US administration, Rouhani said, “The lifting of sanctions by the United States is a legal and reasonable demand from Iran, which we have emphasised several times, and Iran will return to its obligations at the same time as the lifting of the sanction.”

“Iran’s strategy, as has been repeatedly stated, will be action against action,” added the President.

He stated that Iran has always been in favour of dialogue and the use of peaceful methods for resolving disputes in Syria, and called for the continuation of the dialogue process between the leaders of Iran, Turkey and Russia (Guarantors of the Astana Process).

He also stressed the efforts to resolve Syria’s issues, including paving the way for the return of Syrian refugees to their country and drafting a constitution.

Referring to the Nagorno-Karabakh crisis between Azerbaijan Republic and Armenia and the ceasefire between the two countries, Rouhani said Iran adopts the approach of supporting the settlement of disputes through dialogue and negotiation.

Welcoming the regional cooperation initiative with the participation of Iran, Russia, Turkey, Azerbaijan and Armenia, the President said, “This plan can have significant benefits for all parties and Iran is ready to cooperate in specialised fields with countries in the region.”

In turn, the Turkish President stressed the importance of developing bilateral relations, holding a meeting of the two countries’ joint commission, developing trade relations, especially by using preferential trade and cooperation capacities, and effective dialogue to strengthen peace and security in the region.

Erdoğan also emphasised the use of diplomatic solutions and dialogue as well as using the positive international environment to resolve problems and lift unfair US sanctions.