Nour County is one of the must-see places in Iran’s northern province of Mazandaran. Parts of the region are home to the central Alborz mountain range, which is covered with trees and dense vegetation.

Nour county is among Iran’s favorite tourist destinations. Most of northern Iranian cities enjoy special popularity among Iranian and foreign tourists and are usually crowded during holidays.

Proximity to the Caspian Sea (Wikipedia), dreamy rainy weathers, dense forests and other natural attractions are among the reasons why these cities are very popular among the people. 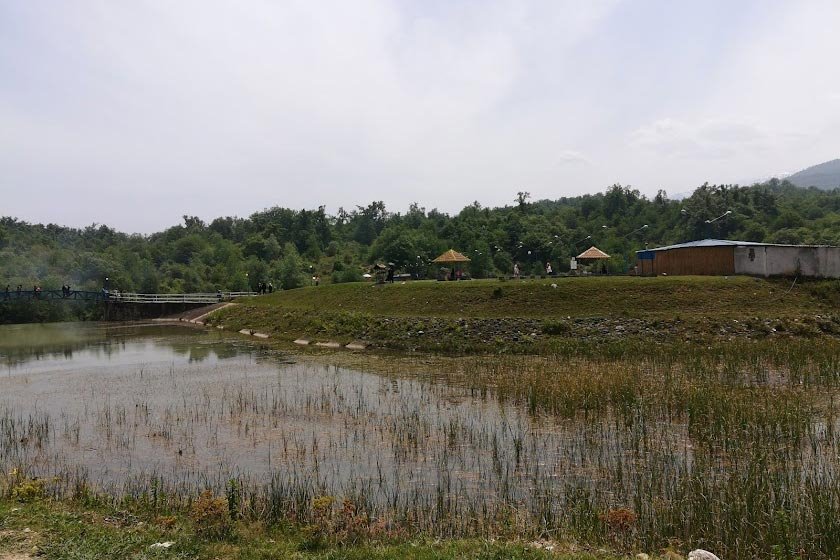 Nour sits in the western part of the province. History says the city was formerly named “Rostam Dar” and once served as the capital of the Romans. Nour’s modern name stems from a river of the same name which flows from the Alborz mountain range and pours into Haraz River.

In Nour, you can see both the central parts of the Alborz mountain range and wetlands, two factors that give the region a mild and favorable climate.

Here, we’ll present a number of natural attractions, including waterfalls, forests and lakes, that you should not miss during your visit to the region:

Ab Pari Waterfall is one of the most spectacular attractions located five kilometers away from the city of Nour and near the city of Royan.

The scenic spot has not been a waterfall by nature, but it has become one due to landslides, water flows, and the falling of mountain rocks.

The forest park, an area of 3,600 hectares, is considered one of the largest of its kind in the entire Middle East and is one of the major such parks in Iran.

The beautiful intertwined trees of the forest have created unique landscapes that make good scenes for nature photography. Spring and summer are the best seasons for visiting the region and going on camping trips there.

Kashpol Forest Park is one of the tourist attractions around the city of Noor, located 5 kilometers from the Nour-Chamestan road. The vegetation of park, an area of about 7200 hectares, is comprised of alders, oaks, maples, myrtles and Persian ironwood.

In ancient times, there were pellet furnaces in the region, which justifies the presence of iron ore in its rivers and has turned it into one of the most special sights of Nour.

You’d better choose autumn and spring for visiting this beautiful forest so that you won’t miss the details.

The beautiful waterfall is located in the Kojur region and the famous gorge in Nahr Roudbar.

The region located between Kajur and Sigangan is a historical site. To visit the waterfall, you should start the trip from Kajur before entering the coal mine road.

In fact, the waterfall is located in Sisangan Forest Park, which is not only one of the largest in Mazandaran but is also the largest forest of boxwood shrubs in the Middle East.

Sisangan Waterfall is located in an intact green area, and in spring and summer, it is viewed as one of the best places in Nour for hiking, nature tourism and enjoying the green and beautiful forests of Mazandaran Province.

The dreamy waterfall is located on the road from Chamestan to Lavij and Nour City. It is one of the most beautiful and pristine attractions of this region.

Local villagers believe that the water flowing from the waterfall has healing powers. You can even see the villagers collecting water from the site if you visit the region.

The name given to the waterfall (which means ‘holy water’ in the local dialect) is rooted in the same belief that the waters are blessed with healing effect.

To reach Haram Ow Waterfall, take the road from Nour to Ab Pari. You will get there after passing by Ab Pari Waterfall.

The waterfall is located in the south of Vanoosh village in the heart of the green heights of Gholvi Kala. It is located 10 kilometers west of Nour, next to a sidetrack of the Nowshahr-Nour coastal road.

The Vanoosh region is home to many small and large waterfalls, out of which three are more famous. These three waterfalls are frequented by mountaineering groups.

The third one is 15 meters high, while the depth of the pond is one meter.

If you visit the region for technical descents, you need to adhere to safety measures and know how to swim.

Sava Sareh Waterfall is located near Baladeh Village and is 100 meters high. The waters descend with great speed and pressure, creating a unique beauty there.

Lake Elimalat has one of the most beautiful and impressive landscapes that you can ever see, because it is situated right in the heart of the forest, where the climate is very mild and cool.

Elimalat is the choice of many of those interested in painting and photography in the nature.

The lake is home to Trout and Amur fish and people who are interested in fishing spend hours in peace and silence spinning their hooks in the crystal clear water.

Fishermen are sometimes surprised when they see red and small fish on their hook. The locals traditionally leave their Nowruz Table fish in the beautiful lake.
Any season is great for visiting Elimalat Lake.

Now, here is a list of other attractions of Nour County:

In addition to the pristine and beautiful nature of Nour, which we presented above, the city hosts several historical tourist destinations as well.

Tamishan Palace is one of the most significant sites in the city. The luxurious palace was built at the order of Ashraf Pahlavi, the sister of Mohammad-Reza Shah Pahlavi, the country’s last monarch.

Another great historical site to visit is the house and the tomb of Nima Youshij in the village of Yoush. Nima Youshij is a renowned Iranian poet, who is known as the ‘Father of Modern Poetry.’

His house dates back 200 years and was built by his ancestors. Besides its grandeur, the structure is one of the most beautiful monuments in Nour.

Emam Zaadeh Jamshid Kia Soltan is also one of the religious-historical sites of Nour, which dates back to the 9th century on the lunar calendar. It has also been registered on Iran’s National Heritage List.

In addition to the sites listed above, you can also visit Rock Elephant in Lavij Village, Poulad Baladeh Castle, Saint. Antoine Church, and Khan-Baba-Khan Building.

1. When is the best season for visiting Nour?

Northern Iran is beautiful in all seasons. In winter, it has a cooler climate than in spring and summer. The level of humidity is, however, less than that in summer.

If you want to enjoy the rains or you are interested in traveling to the nature under the rain but you don’t like hot and humid weather, winter and autumn can be a good choice. Otherwise, we suggest spring.

2. What entertainment does the city offer besides natural and historical attractions?

The Dasht-e Nour entertainment complex is one of Mazandaran’s largest recreation facilities, which has been built in three phases, including villas and cottages.

There are also indoor and outdoor swimming pools for tourists in the complex.
In Dasht-e Nour, lies a large lake, in an area measuring 4,000 square meters, where tourists can go fishing or boating.