Lorestan is one of the most beautiful provinces of Iran. Sightseeing in Lorestan falls in the category of natural tourism. Breathtaking nature of Lorestan has led the province has to earn the nickname the “bride of nature”.

In recent years, Lorestan has become more popular with tourists and each year huge numbers of them travel to the province to see the dazzling nature of Lorestan in western Iran.

This is one of the mountainous provinces of Western Iran. Most parts of Lorestan are covered by the Zagros Mountain. Its climate is diverse and this diversity is visible from Lorestan’s northeast to its northwest.

Lorestan is the third most water-rich province of Iran and accounts for 12 percent of the country’s water resources.

Obviously, amenities are adequate in Lorestan. There are big restaurants, modern shopping malls and high quality hotels in the province. But visiting Lorestan as a tourist is a different experience. The province is known as the heaven of water falls of Iran. It is also called the “bride of nature”. Besides the nature of Lorestan, its climate is four-season and people can visit the province during all seasons of the year.

Makhmal Kūh is one of the tourist attractions standing by the nature of Lorestan. It is composed of huge rocks and it’s been called Makhmal (the Persian word for velvet) because the rocks have been formed by lichen and this has given the appearance of velvet to the mountain.

Makhmal Kūh has a wonderful natural beauty and access and it’s suitable for hiking in nature.

Meanwhile, there is a forest park in the northern part of the mountain which you can enjoy visiting.

Nozhian Waterfall is one of the highest and most exciting tourist attractions of Lorestan. It is 95 meters high. The waterfall is composed of green vegetation, dense trees and medicinal plants.

Nozhian is located 40 kilometers southeast of the city of Khorramabad, the provincial capital. Nozhian’s water is clear, while the waterfall with its pristine nature adds to the wonders of the nature of Lorestan Province.

It is famous in Lorestan for the medicinal plants that grow in the waterfall.

Shevi Waterfall, also known as Telezang, is one of the highest waterfalls of Iran and is located on the border between Lorestan and Khuzestan Provinces.

This beautiful waterfall is near the city of Doroud and is accessible via the Shevi station on the Doroud-Andimeshk railroad.

After getting off the train, tourists can reach the waterfall through walking and hiking a short distance to have more access to the nature of Lorestan.

There is a lake in the middle of Oshtorankuh that has created a matchless beauty. Gahar Lake is a beautiful tourist attraction for lovers of nature and can give them great pleasure if they travel to the lake.

On one side of Gahar Lake, one can see a vast plain covered with anemones and tulips.

Gahar Lake covers an area of 85 hectares. This has made it one of the largest freshwater lakes of Iran. The lake has a variety of animals and plants which is rare.

Different plant species like trees of pistachio, pear, oak, fig, hawthorn, and willow and various types of flowers and animal species such as deer, leopard, goat, rabbit and others live in this area.

Azna Snow Tunnel is one of the most marvelous natural wonders that has been formed gradually in Lorestan. The ceiling of the tunnel is 2.5-3 meters high and the tunnel is 800 meters long.

The tunnel was formed by snow piled on top of each other over a period of thousands of years.

This snow flows like a river while the snow melts in warm seasons. Tourists are strongly recommended to not enter the tunnel as it’s very dangerous because it’s always likely that it will collapse. But you should absolutely not miss the pleasant experience of walking in a snow tunnel while you can hear the beautiful sound of water dripping.

Bisheh Waterfall was registered as a natural heritage site in the year 2008. If you plan to visit this tourist attraction, you can book local inns at reasonable prices.

The waterfall is located 60 kilometers from Khorramabad. It’s 48 meters high and 20 meters wide.

Another tourist destination in Lorestan province is Kalmakareh Cave. Many relics and monuments of the Achamenid and Sassanid civilizations can be found in this cave.

Some claim that during those eras, the cave was used as a vault. That’s the reason why many treasures, such as ancient masks and bowls of almond fish as well as many other relics put on display in foreign museums were found inside Kalmakareh Cave.

One of the 6 most important treasures of the world was found accidentally in this cave. To watch most of the ancient relics found inside the cave, tourists should visit the British, New York and Louvre Museums.

Facedown Tulips Plain, among the top beauties of nature of Lorestan

Lorestan’s Facedown Tulips Plain extends from southeast Aligoudarz to the foothill of Zagros Mountain. The plain is covered by two tulip species: Sousan-e Chehel Cheraagh and Kaiser’s crown. These two species are rare.

If you decide to visit this beautiful plain, we recommend that you do so in spring because that’s the best season for a visit to Facedown Tulips Plain.

This beautiful tourist attraction is near the city of Khorramabad. This easy access to the amenities of the city is one reason why many tourists are attracted to Keeyow Lake.

Keeyow in Lori dialect means blue and dark. The lake was named Keeyow because of the existence of special plants at the bottom of the lake that cause it to seem blue in color.

This tourists resort offers visitors such recreational services as water skiing, boating, jet skiing, etc. Depending on when you visit Keeyow Lake, you may see migrant birds there.

As we said before, Lorestan Province has unique and many natural attractions in addition to various tourist potentials.

Each of these tourist resorts including the wetlands, forests, pastures, rivers, towering mountains, roaring springs and waterfalls, natural caves and matchless natural sceneries has created an amazing world of natural tourism attractions in Lorestan Province.

The following pictures were published by Miras Arya News Agency.

Your queries about Lorestan Province

1. Which season is best for visiting Lorestan?

The best time for visiting Lorestan is spring (especially the Persian month of Ordibehesht). Summer is however good for this purpose because Lorestan has a mild and cool weather and the average temperatures in the hottest time of the year, namely from July to early September, is 25.9 degrees centigrade (which is favorable). 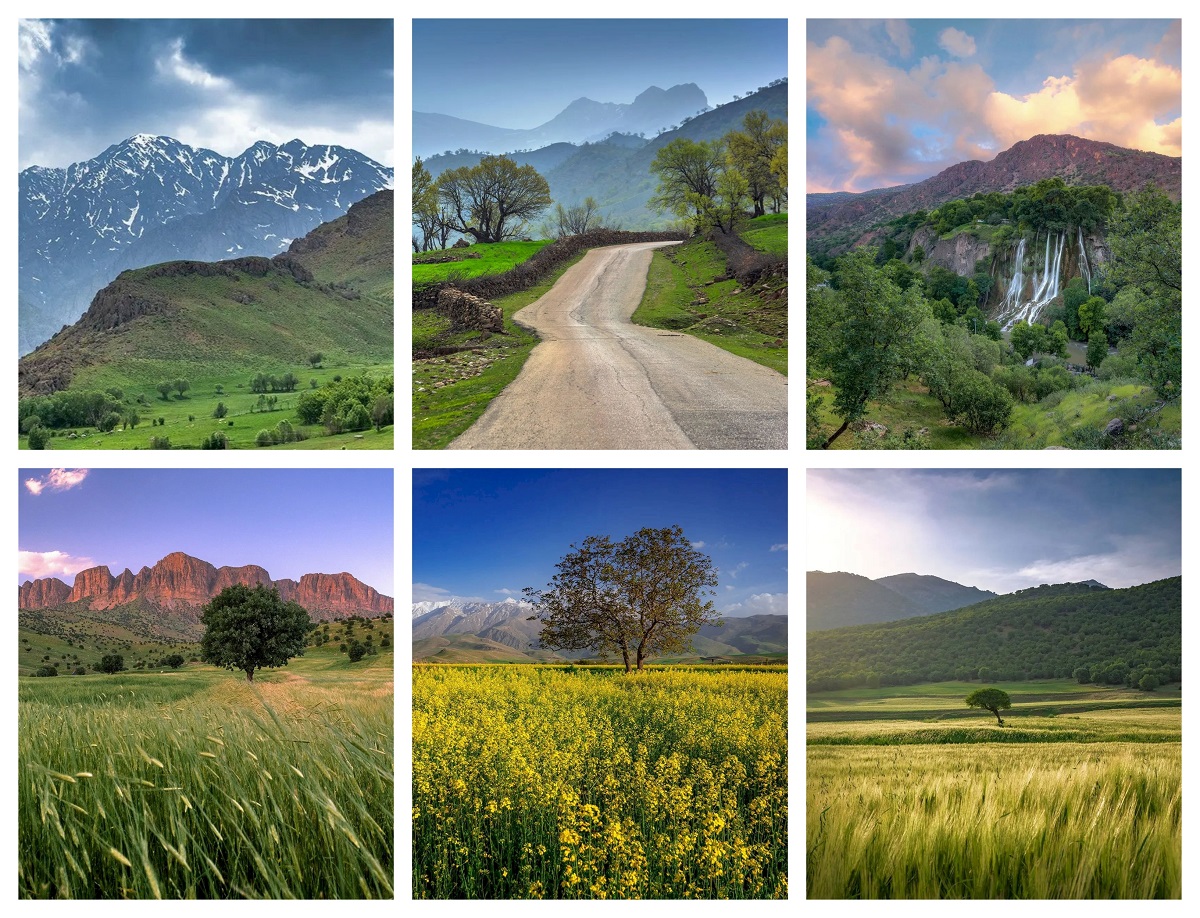 2-What are the historical attractions of Lorestan?

In addition to natural attractions, the province has historical attractions for tourists. Some of the historical sites of Lorestan are: ancient caves… Shapur Khast (Falakol aflak) Castle, Gerdab-e Sangi or Gerdau Bardineh (a historical stony whirlpool from the Sassanid era), the brick minaret, the epigraph, the ancient caravanserai of Seyyed Reza in Khorramabad, etc.

These invaluable monuments now count as a collection of historical bridges of Iran and the whole world.