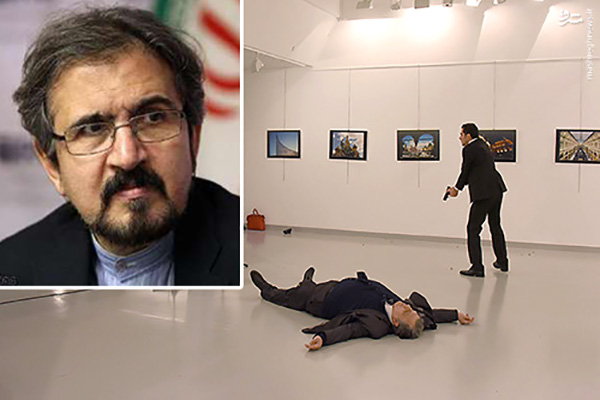 The Iranian Foreign Ministry on Monday strongly condemned the assassination of the Russian envoy to Ankara, Andrey Karlov, saying that the criminal act aimed at further conflict in the region.

Turkish Foreign Ministry has also confirmed Karlov’s death, in a written statement, adding that the perpetrators will face justice for their action. The ministry designated the attack on Karlov as a “terror organization.”

Meantime, the Iranian Foreign Ministry Spokesman Bahram Qassemi called the attack “brutal”, and noted that the criminal act indicates that “terrorists affiliated to extremist and Takfiri groups are not bound by any standards, principles or the international law.”

“They are carrying out such brutal measures with the purpose of creating conflict among countries and further insecurity and instability in the region,” he added.

He said terrorism should only be addressed through solidarity and unity among all nations, and underlined, “The Islamic Republic of Iran will stand by governments and nations in the region and across the world until the complete eradication of this vicious phenomenon.”