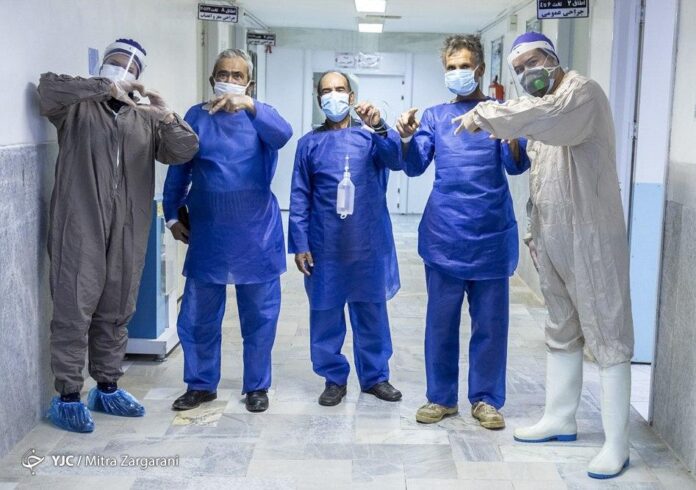 Health Minister Saeid Namaki says Iran has registered a world record regarding the number of patients who recover from the novel coronavirus.

As of Friday noon, over 66,500 Iranian patients had recovered from the COVID-19 and been discharged from hospitals across the country, according to Health Ministry figures.
Speaking after a video-conference meeting with his counterparts from other countries of the world, the Iranian health minister described the record as a great honour for the Islamic Republic in the difficult conditions of international sanctions.

He further noted that the number of daily deaths due to the coronavirus in the country has decreased by over 30 percent in the past three weeks, and the new cases of infection confirmed every day have shown a downward trend by 40%.

Namaki added that from every six regions of the World Health Organisation, one country was selected to share its experiences with the world and fortunately among the eastern Mediterranean countries, the Islamic Republic of Iran was chosen.

“I extend congratulations on this great achievement, and I hope that with empathy, consensus, and observance of health principles and protocols, we will continue this trend quickly and set a historical record in the international arena,” stressed Namaki.

At the meeting, Namaki told his counterparts that no COVID-19 case in Iran has been left out of the hospital.

“Fortunately, from the very first days, we carried out coronavirus tests and handled the patients with the right principles. We did not exclude any age group from treatment, and even no emergency non-corona cases.”

Luckily, during this period, we treated all dialysis patients, heart patients and those in the intensive care unit along with patients with COVID-19, underscored Namaki.

“Today, with the development of our healthcare infrastructure, the number of hospital beds for every 1,000 people is 1.6, while in France and other European countries it is five or six times more than ours. Moreover, the number of nurses for every hospital bed in European countries is about two to three times more than that of Iran,” he went on to say.

“In the meeting, we described to the world our great screening experience,” he noted, referring to the national mobilisation plan implemented by his ministry to fight against corona.

He described the plan as a big step that no other country has implemented at such a level. More than 71 million of the country’s 83 million population were screened using the capacity of health and prevention sector.

Namaki continued that in the meeting, the Islamic Republic called on the World Health Organisation to put pressure on the oppressive countries to remove the sanctions and do something to put less pressure on the weak countries.

In this way, he told the meeting, the infrastructure of the health system will be less damaged by discrimination in the world, and these countries will be able to pass the post-Corona period without economic problems.

“At the meeting, we made some points for the countries of the world about the smart distancing project in Iran and said we should be able to help businesses thrive again despite the strict protocols to prevent pressure on families and low-income trades.”

Namaki also highlighted that these goals have been achieved with support, empathy, observance of health protocols and social distancing, as well as uninterrupted efforts of health and medical forces.