Iran Ready to Take New Steps for Enhanced Ties with All Neighbours: President 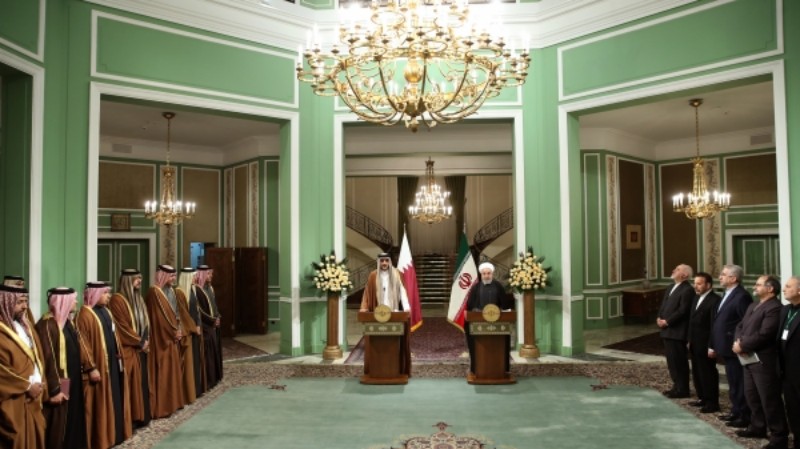 Iran's president says the country welcomes further development of relations with its neighbours, especially Qatar, and is pleased it has had close relations with the Arab country in recent years.

Hassan Rouhani added that expansion of relations and cooperation between Tehran and Doha is important for the two nations and the Islamic Republic is ready to take new steps in economic and commercial collaborations.

He made the comment during a joint press conference with Qatari Emir Sheikh Tamim bin Hamad Al Thani in Tehran.

“In recent years, since some countries imposed sanctions on Qatar, the Islamic republic has carried out its duty as a neighbour and friendly country and will stand by the Arab country in the future,” continued Rouhani.

He added that important decisions have been made with the Emir of Qatar to strengthen ties between the two countries.

He stated that the two sides have decided to hold a joint commission on a regular and annual basis.

In turn, the Emir of Qatar Sheikh Tamim bin Hamad Al Thani said the two sides had a very good meeting on Sunday, and agreed to set goals in business and tourism areas.

He described the relations with the Islamic Republic as historic, pointing out that the communication channels between the two countries have always been open.

“The only solution to all the crises is dialogue, and we believe that dialogue can resolve the crises,” he said.

Sheikh Tamim bin Hamad Al Thani also thanked Iran for its stance when his country was under siege. He said Doha will never forget Tehran’s helps.

Earlier, during the meeting of the two countries’ high-ranking delegations in Tehran, Hassan Rouhani talked about the great capacities for investment in Iran in various sectors such as agriculture, industry and hotel construction.

“Qatari economic and private sector businesspeople can seize this opportunity and invest in these projects to promote bilateral ties,” he added.

He also stressed that the Islamic Republic is ready to transfer its experience in different sectors to Qatar.

“Establishment of a joint commission on cooperation is necessary for the implementation of joint agreements and planning for the development of comprehensive ties,” reiterated Rouhani.

He touched upon the two sides’ cooperation in the development of regional stability and security, especially in the framework of the Hormuz Peace Endeavour (HOPE) Initiative, adding that Iran has been consulting and interacting with Qatar in various regional and international issues.

Elsewhere in his remarks, Iran’s president expressed hope that during the formation of the Joint Commission on Cooperation between the two countries an exhibition of the capabilities of Iran and Qatar would be held to put on show the investment opportunities.

In this meeting, the Qatari emir for his part appreciated the hospitality of the Islamic Republic of Iran and officially invited Hassan Rouhani to travel to Doha.

“We call on members of the commission to address various issues of interest that can contribute to the development, and consolidation of Tehran-Doha ties at all levels. We welcome the cooperation of Iranian and Qatari businessmen.”

“We believe that the escalation of tensions in the region are not beneficial to the region and the world, and we have always seen wisdom from Iran in regional issues. We should cooperate with Tehran as an influential party to maintain security in this region because any security cooperation in this region without the presence of the Islamic Republic is of no use,” said the Qatari emir.