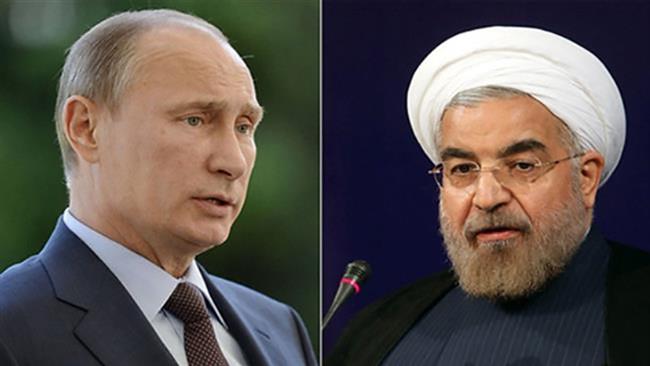 Iran’s President Hassan Rouhani says Tehran is prepared to host a trilateral summit with Russia and Turkey on the issue of Syria, and broker a deal agreed upon by all sides.

Rouhani made the remarks in a Saturday phone conversation with his Russian counterpart Vladimir Putin.

He said as it has been emphasised for many times that the Syrian crisis can only be resolved through diplomacy and dialogue.

He described the situation in Idlib as worrying and said the Astana Process agreements must be implemented as soon as possible in order to eradicate terrorism and bring back calm to the region.

“We must not allow the conditions in Idlib to become a pretext for the US intervention,” reiterated Rouhani.

The president announced readiness to host the trilateral summit of Iran, Russia and Turkey.

“In recent years, with the cooperation of Iran, Russia and Syria, great steps have been taken in the fight against terrorism, and its results must be preserved,” underlined Iran’s president.

On the issue of Idlib, we are totally prepared to broker an agreement at political and security levels, agreed upon by the three countries, he added.

Referring to recent developments regarding the nuclear deal, Rouhani appreciated Moscow’s stance on the JCPOA, saying as long as Iran enjoys the benefits of this agreement, it will honour its commitments.

He also expressed hope that the agreement will be preserved with the cooperation of the other parties.

For his part, the Russian president expressed sympathy over the deaths of a number of people in Iran as a result of the coronavirus outbreak.

Putin welcomed the Iranian president’s proposal to implement the health protocol promptly saying that Moscow is ready to cooperate with Tehran in the fight against coronavirus.

The Russian president called the agreements reached in the Astana process very effective in resolving the Syrian issue, adding that the creation of de-escalation zones should not be considered as a halt in fight against terrorism, and Russia hopes coordination will continue in the future.

Putin went on to highlight the significance of preserving Syria’s territorial integrity, stressing it is the Syrian government’s right to fight against terrorists on its territory .

The Russian president also welcomed Iran’s readiness to host the upcoming trilateral summit of the three countries within the framework of the Astana Process, expressing hope that differences will be resolved through talks quickly.

Putin further touched upon Iran-Russia cooperation on the nuclear deal, saying that “the recent meeting of experts in Vienna provided a good opportunity to move towards a breakthrough in this regard.”