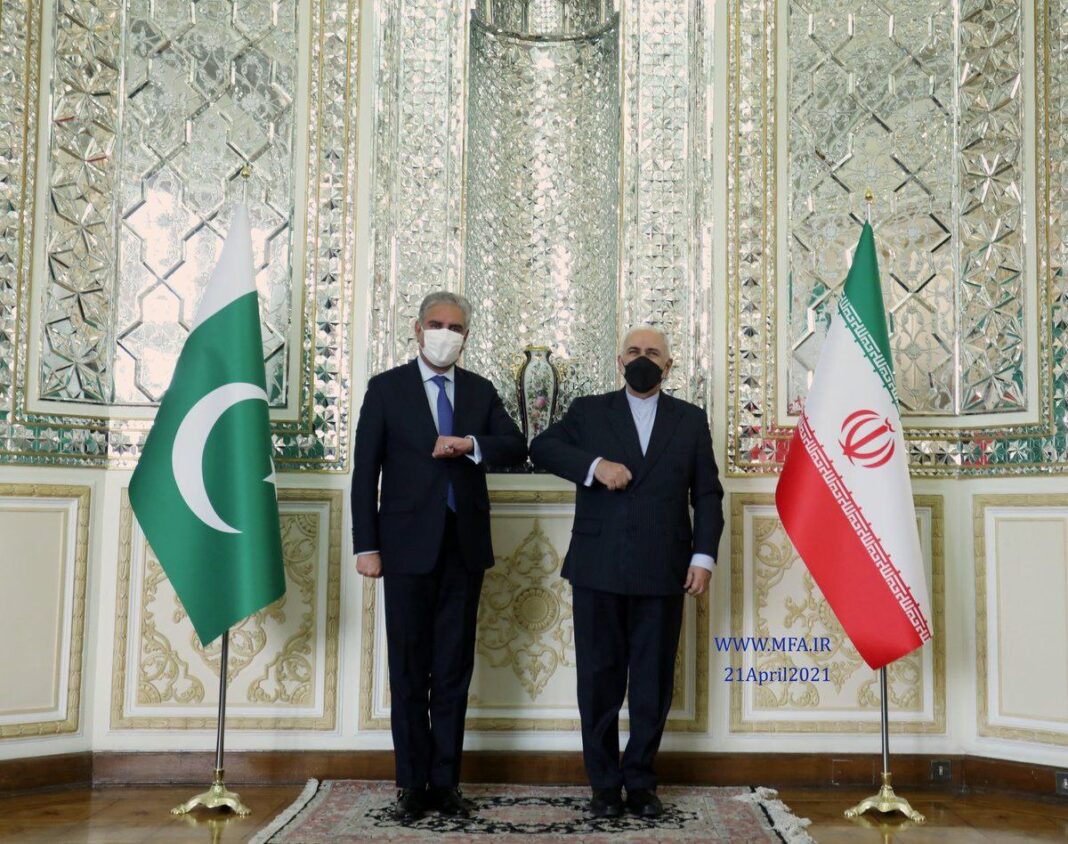 Iranian Minister of Foreign Affairs Mohammad Javad Zarif has sat down with his counterpart from Pakistan Shah Mahmood Qureshi, who is in Tehran for talks with Iranian officials.

In the Wednesday meeting, the two top diplomats discussed issues of mutual interest.

While welcoming the visiting Pakistani foreign minister, Zarif noted that the anniversary of the demise of Muslim writer Muhammad Iqbal Lahori falls on Saadi Day on April 21, 2021.

“The fact that you in Pakistan honour Saadi and we in Iran commemorate Muhammad Iqbal Lahori shows deep-rooted bonds between Iranian and Pakistani nations and clearly demonstrates cultural commonalities between the two countries,” said Zarif.

Zarif expressed hope that a memorandum of understanding will be signed between Tehran and Islamabad on the establishment of markets along the two countries’ borders, and that ground will be broken to construct them as soon as possible.

“With the three official border crossings currently up and running and with the establishment of six border markets, cross-border trade will flourish and will impact the [living] conditions of people in the region,” said Zarif.

The top Iranian diplomat also called for the enhancement of consular cooperation and judicial assistance between the two countries.

“This cooperation will improve the conditions of Iranian and Pakistani expats living in either country and will further boost the relationship between the people of both countries,” said Zarif.

“Security and stability along Iranian and Pakistani borders are a key contributor to the betterment of the [living] conditions of those living on borders, the fight against organised crime and the prevention of illegal migration.

“Relations between the two brotherly and friendly countries of Iran and Pakistan should be designed in such a way that those relations are least affected by the United States’ cruel sanctions,” the top Iranian diplomat said.

Zarif further stressed the importance of continuing mutual consultations on different issues, including the future of Afghanistan.

The Pakistani official, in turn, said he was pleased to be visiting Iran, calling for the expansion of reciprocal ties on all fronts.

He said Tehran-Islamabad relations are based on deep-rooted historical, civilizational and democratic tenets.

He noted the two countries have common ground on many issues, namely bilateral affairs, regional developments such as the situation of Muslims and the issue of Palestine, and international issues such as multilateralism.

The top Pakistani diplomat called for the enhancement of mutual trade and economic ties, urging both sides to work together closely in fighting the coronavirus pandemic.

He also touched upon meetings, in Vienna, of the joint commission on the 2015 nuclear deal,

officially known as the Joint Comprehensive Plan of Action (JCPOA), and expressed support for those negotiations.

He embraced the promotion of consular cooperation and judicial assistance between the two  countries, saying Pakistan stands ready to forge closer cooperation with Iran on consular affairs as well as the status of the prisoners of both countries.