A look at Iranian newspaper front pages on March 12

President Rouhani’s trip to Turkmenistan where the two countries inked 17 cooperation deals made headlines in most Iranian dailies on Thursday. The final statement of a 17th meeting of the Assembly of Experts thanking the Iranian nuclear negotiation team for their endeavors on the diplomatic front dominated the Iranian newspapers too. Also in the news was the operation by the Iraqi army, backed by Iran’s IRGC, to recapture Tikrit from the ISIL terrorists.

Abrar: “Those who have outfitsof politics on cannot engage in media activities,” said the deputy culture minister for press affairs. 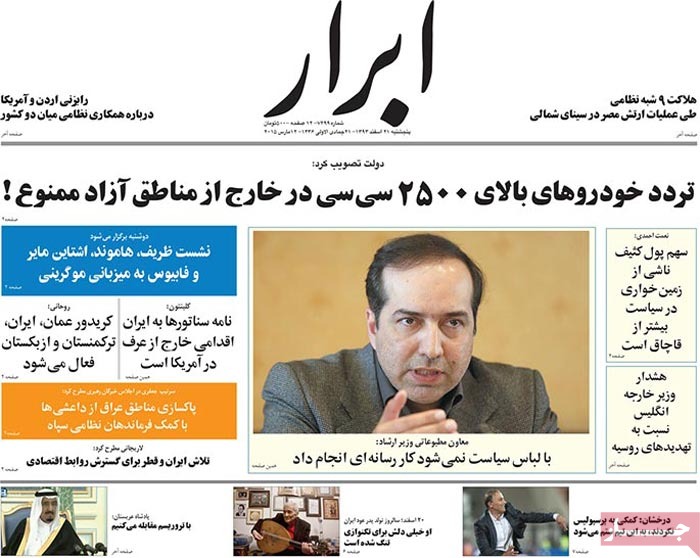 Afarinesh: “Iran has asked all parties involved in the Yemini conflict to participate in the [crisis] talks,” said Parliament Speaker Ali Larijani in Qatar. 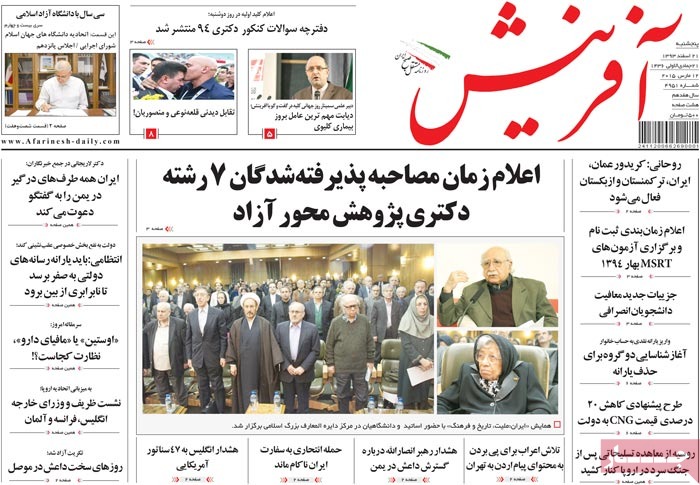 Afkar: Parts of Iraq have been purged [of ISIL terrorists] with the help of the commanders of the Islamic Revolution Guard Corps.

IRGC Commander Major General Mohammad Ali Jafari made the remark in a session of the Assembly of Experts. 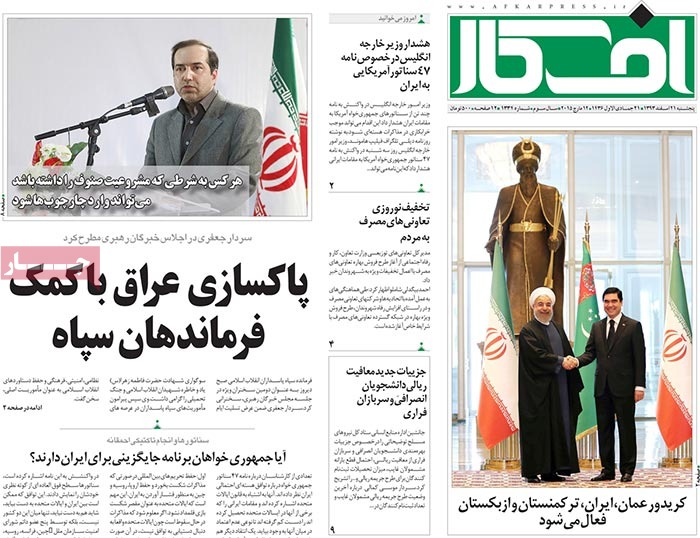 Arman-e Emrooz: In a final statement, members of the Assembly of Experts have thanked the Iranian team in the nuclear talks [with P5+1]. 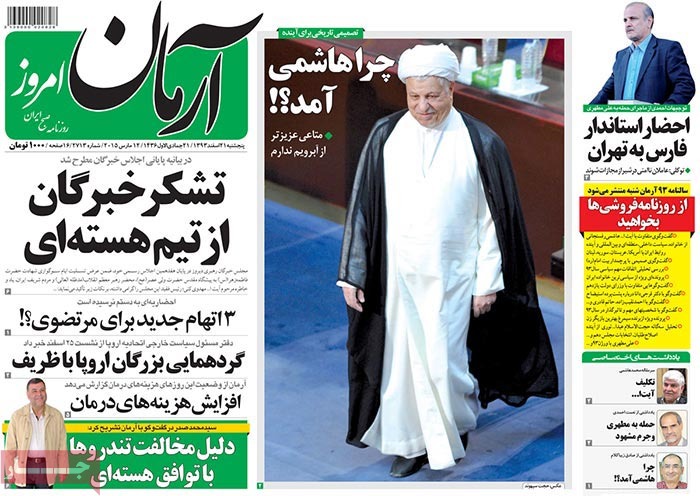 Asrar: “Some are going to extremes”.

Grand Ayatollah Nasser Makarem Shirazi made the remark, adding that certain people wrongly claim that the government has done nothing [for the public]. 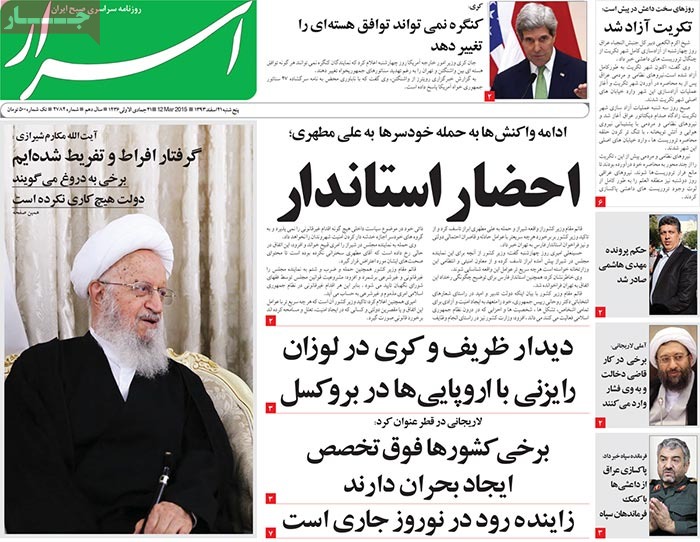 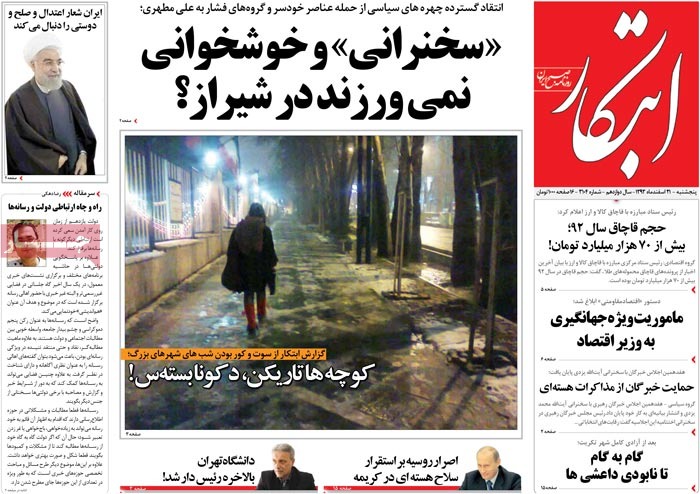 Ettela’at: Tikrit has been taken back from ISIL.

Ettela’at: Iran’s top MP has said that certain countries are seeking to create divisions in the region. 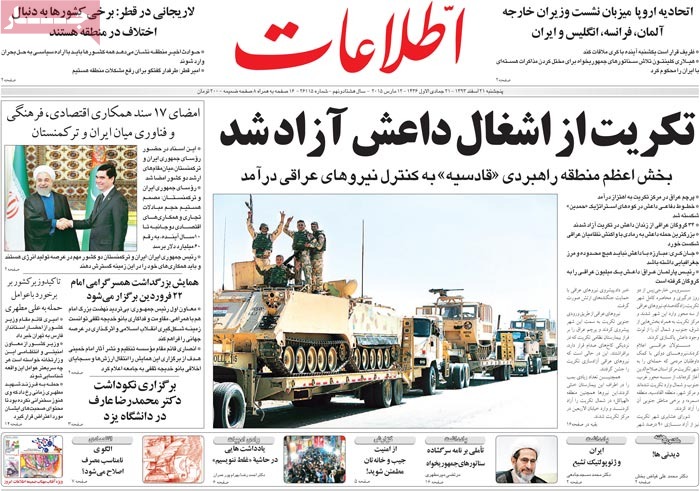 Farhikhtegan: Supporters of [President] Obama have started to take measures; one-hundred thousand signatures against 47 signatures [a reference to 47 US Republican Senators who sent a letter to Iranian officials saying that any nuclear deal with Iran would last as long as Obama is in office]

[The Logan Act says that a US citizen who communicates with a foreign government to influence the government’s actions could be jailed and face a fine.] 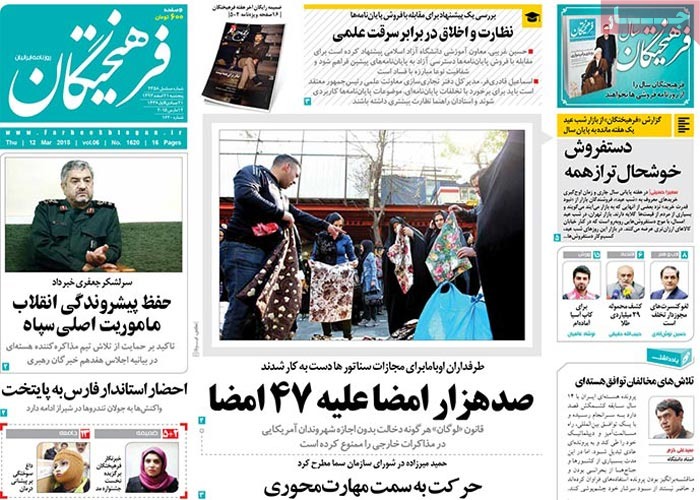 Hemayat: “Efforts to [wrongly] announce that a defendant has been exonerated run counter to the law and can be prosecuted,” Judiciary Chief Ayatollah Sadegh Amoli Larijani said. 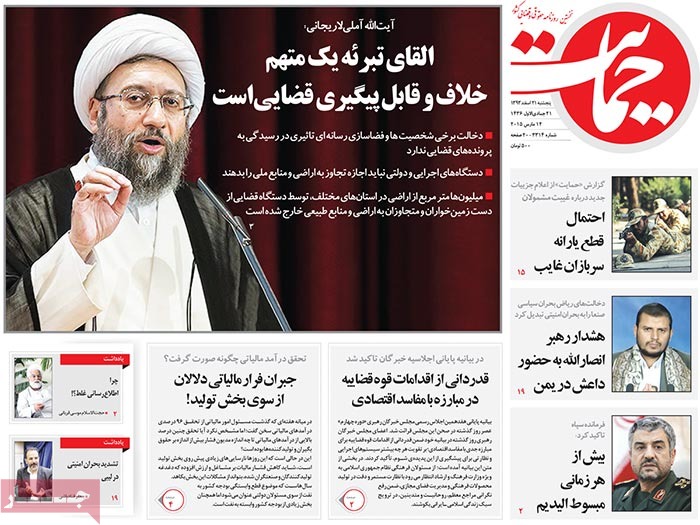 Iran: The French government spokesman has said that a [final] nuclear decision will be made within 7 to 10 days. 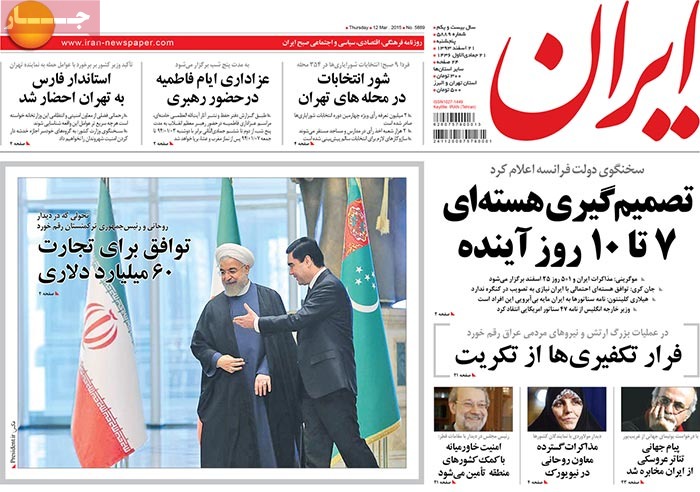 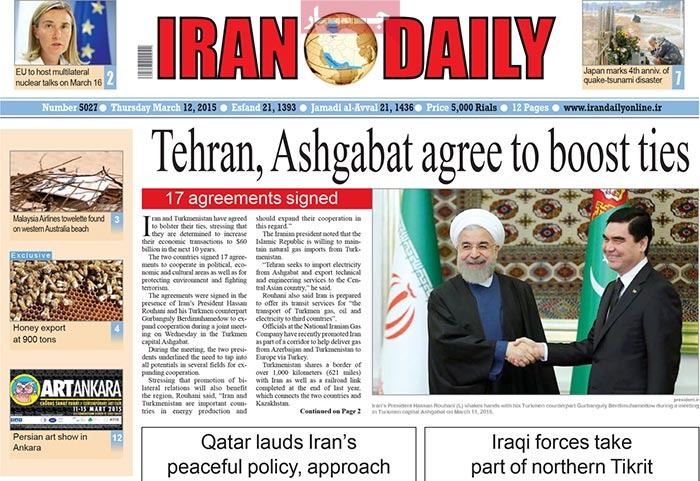 Jomhouri Islami: Iran and Turkmenistan have signed 17 cooperation agreements with the presidents of the two countries in attendance.

Jomhouri Islami: The governor of Fars Province has been summoned to Tehran in connection with a recent attack on Tehran MP Ali Motahari in the provincial capital Shiraz.

The ministers of intelligence and interior have said that those who attacked the parliament deputy in the southern city should be seriously dealt with. 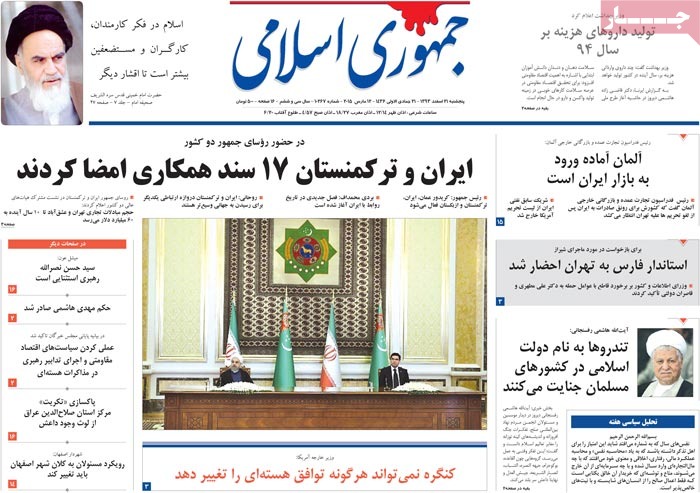 Kayhan: “The current interest rates will lead to the collapse of the economy,” said the Ministry of Economy and Financial Affairs.

Kayhan: Members of the Assembly of Experts have stressed in their final statement that sedition [a reference to post-election unrest in 2009 and those candidates who questioned the election results] should be a red line for the country’s officials. 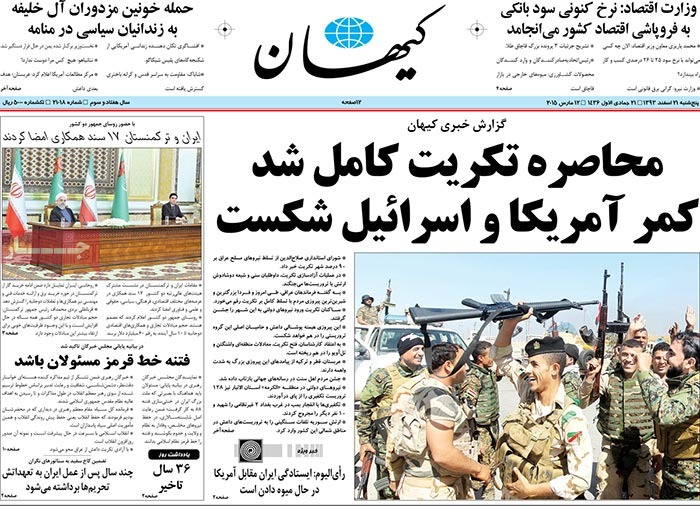 Kayhan International: IRGC Chief: US role reduced to a player Mardomsalari: The Iraqi foreign minister has said that a nuclear deal between Iran and the United Sates will serve Iraqi interests too. 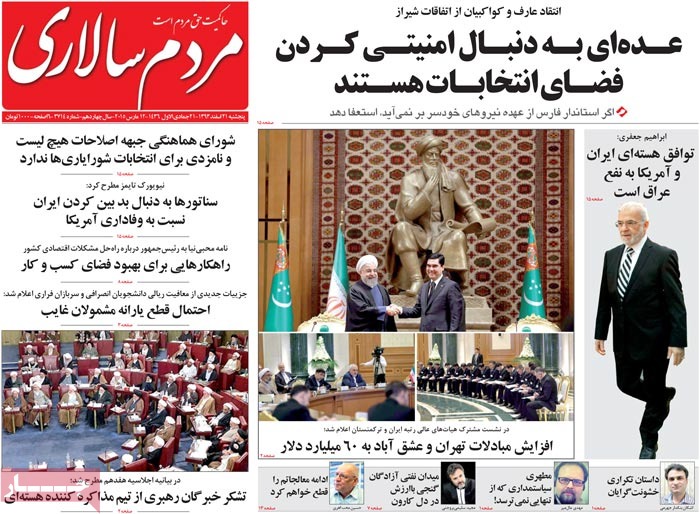 Rah-e Mardom: “We hope land gabbers will be dealt with seriously,” said the head of the Forests, Range and Watershed Management Organization. 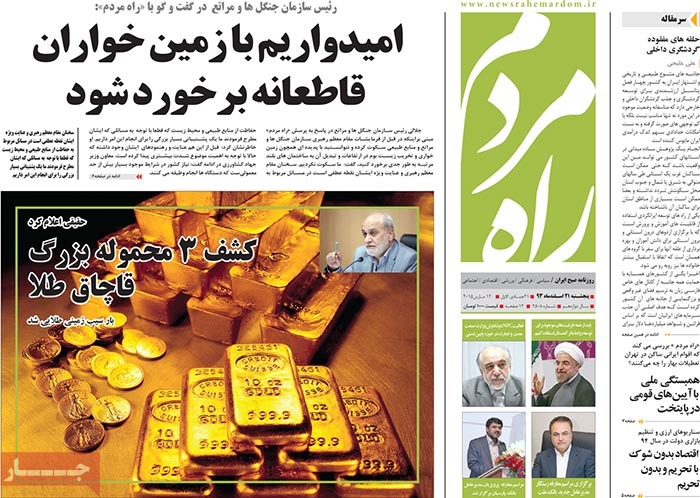 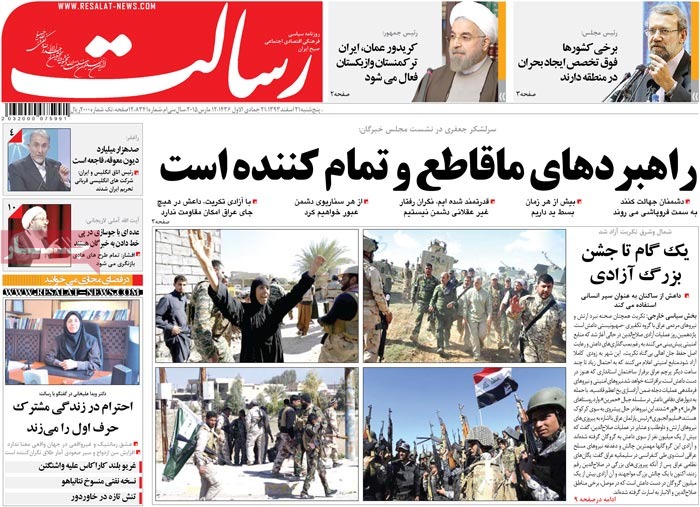 Rooyesh-e Mellat has quoted Al-Manar [a Lebanese satellite television station] as reporting that a plot to target the Iranian embassy in Lebanon has been foiled. 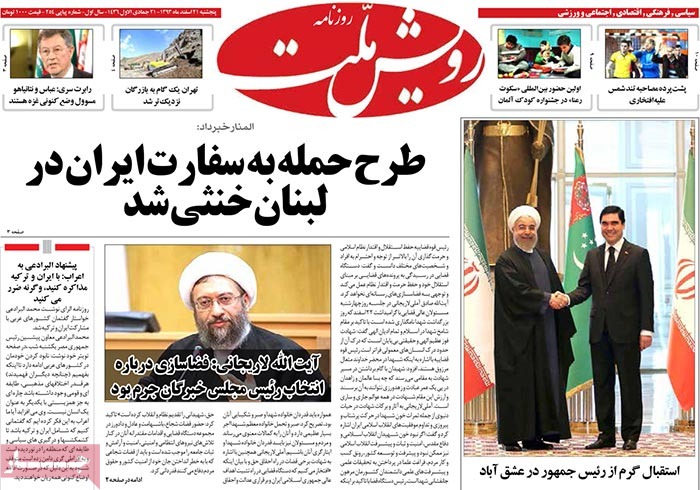 Sharq: “An Oman-Iran-Turkmenistan-Uzbekistan corridor will be activated,” said President Rouhani. 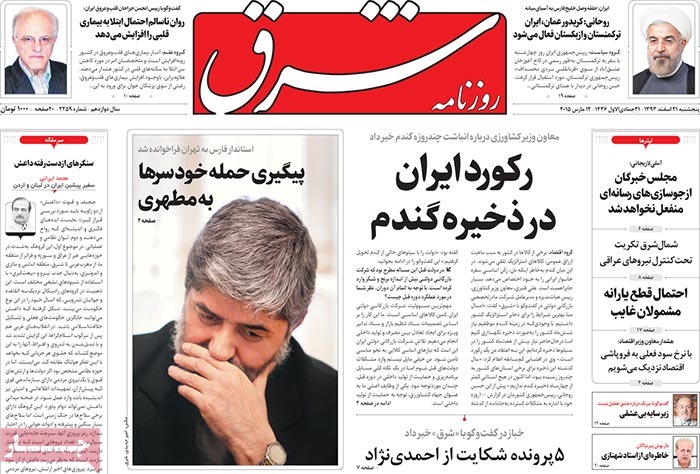 Sobh-e Eghtesad: The Oil Ministry is determined to raise its refining capacity to more than 3 million barrels a day. 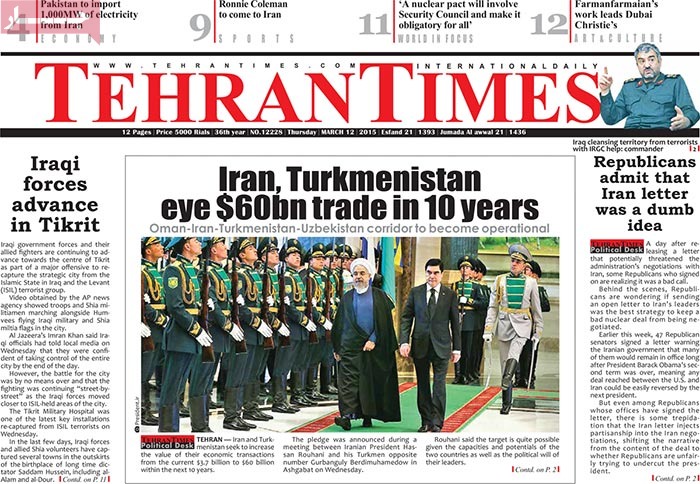