A look at Iranian newspaper front pages on Sept. 23

A military parade in Tehran on Monday and President Rouhani’s speech at the event to mark the start of the Sacred Defense Week dominated the front pages of the Iranian newspapers on Tuesday. The departure of the president for New York, where he will attend an annual meeting of the UN General Assembly, grabbed headlines, too. The reopening of schools after a three-month summer recess was also among top stories of the dailies. “As many as 12 million students return to classrooms across the country,” one headline read. “Iranian female shooters beat expectations to win medals in the Asian Games,” was another oft-repeated story in the papers. The comments of the prosecutor general about Babak Zanjani, who is charged with unprecedented corruption, were splashed across the front pages of several dailies:

Abrar wrote on its front page that former Tehran Prosecutor Saeed Mortazavi’s case has been sent to the Intelligence Ministry for further investigation.

Abrar also highlighted a message by President Hassan Rouhani to Saudi King Abdullah to congratulate him on the kingdom’s national day and express hope the two nations could develop further brotherly ties. 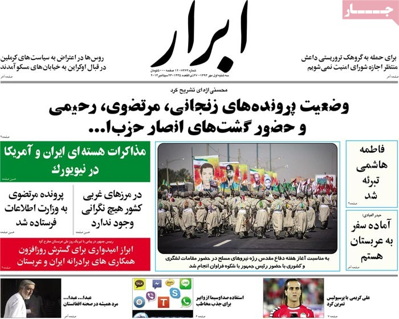 Afarinesh:“Sudan has closed its school in Iran.” The move, which comes after the Sudanese government closed Iran’s cultural centers in Khartoum, seems to be part of a broader scheme to suspend cultural relations between the two countries. 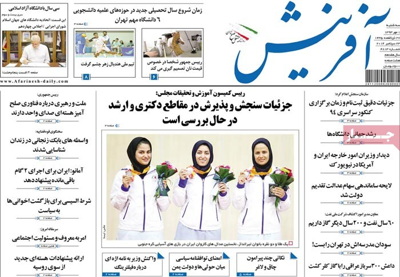 Afkar: “Iran welcomes the [peace] accord in Yemen.” 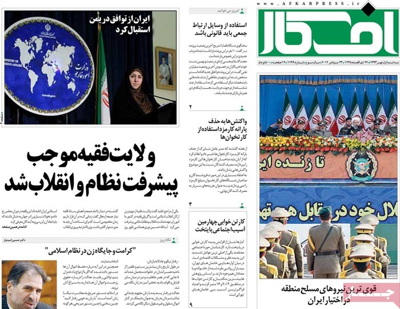 Arman-e Emrooz quoted Expediency Council Chairman Ayatollah Akbar Hashemi Rafsanjani as saying that not only did Iran make no progress during the eight-year period [under former President Mahmoud Ahmadinejad], but it even moved backward. 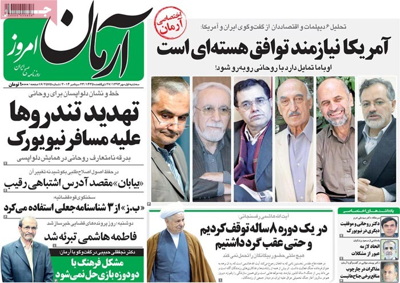 Asr-e Eghtesad: “Customs clearance which used to take 70 days to complete is now down to three days.” 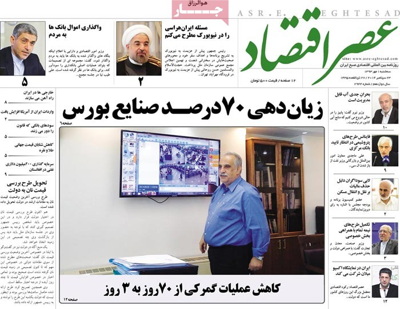 Asr-e Rasaneh: The Iranian oil minister has praised the services of his deputy for international affairs, saying, “Ali Majedi [who has been appointed as Iran’s ambassador to Berlin] masterfully handled talks with Turkmenistan during his one-year-plus stint [at the Oil Ministry].” 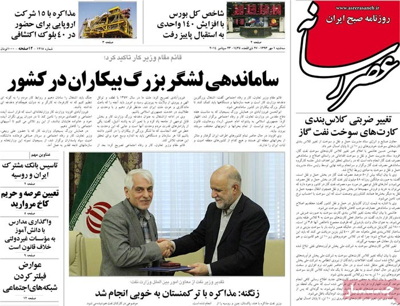 Asrar covered on its front page the comments of Nasser Ghavami, a reformist MP, who said that reforms are what Iran currently needs. 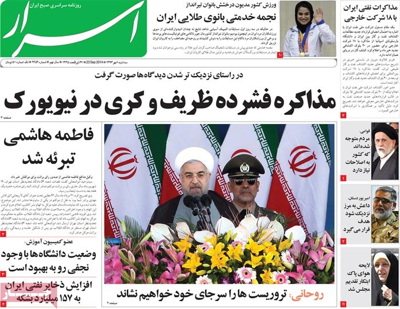 Ebtekar: “Ansar Hezbollah had a change of heart” is the headline of a report on the comments of Deputy Police Chief for Social Affairs Saeed Montazer al-Mahdi about the controversial issue of motorbike patrols on Tehran’s streets by Ansar Hezbollah to promote virtue and prevent vice. The brigadier general said different opinions about the enforcement of the plan came up at his meeting with Secretary General of Ansar Abdolhamid Mohtasham. Finally, Mr. Mohtasham decided to reconsider the move, he concluded.

Ebtekar: “We do not have war on our mind, neither will we bow to pressure,” said President Rouhani in a speech at a military parade on Monday September 22, the beginning of the Sacred Defense Week. 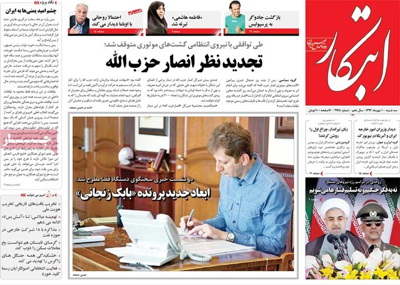 Eghtesad-e Pooya: “President Rouhani signed the Clean Air Bill [designed to tackle air pollution]” is the headline the daily put on its front page. The bill is to be sent to the Islamic Consultative Assembly for approval.

Eghtesad-e Pooya: “Eighteen foreign firms are vying [for contracts] in 40 exploration blocks in Iran,” an official with the Iranian Oil Ministry said. 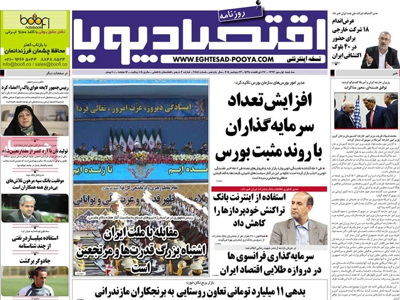 Etemad took an analytical look at the economic policies and performance of President Rouhani in the first half of the Iranian year [starting March 21, 2014], saying, among other things, inflation is on its way to slipping below the 20 percent line. 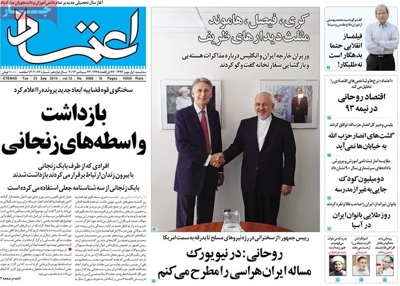 Ettela’at: “Nine university presidents expressed full readiness to implement the policy guidelines [which have been issued by the Supreme Leader of late]”. In a letter the academicians said appropriate instructions by the Leader on science and technology policies reflect the fact that the Islamic Republic of Iran views science as the third factor contributing to progress alongside economy and culture.

Ettela’at: “We are poised for transparency in keeping with international law,” said President Rouhani before he left Tehran for New York.

Ettela’at quoted Russian deputy foreign minister as saying that Iran and P5+1 have reached some agreements over the key differences and that Moscow put forth new plans which played a role in the progress of the talks.

Ettela’at: “The Yemeni government has bowed to signing an agreement with the Houthis.” 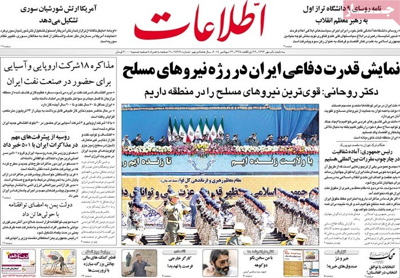 Farhikhtegan: President Rouhani describes “Countering Iranophobia and Islamophobia” as the purposes of his second visit to New York.

Farhikhtegan: “First Asian medals were bagged by Iranian women” putting an end to a medal drought in the 2014 Asian Games in Incheon, South Korea. 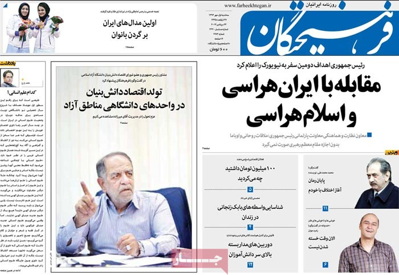 Jahan-e Sanat: “Social networks are to help the economy” is a news piece about the role of social networks in a campaign called “Must See Iran”. The one-year campaign is intended to serve two main purposes: Firstly, introduce Iran’s tourist attractions on social networks to provide those interested in visiting Iran with enough information, and secondly, give a leg-up to Iran’s tourism industry. 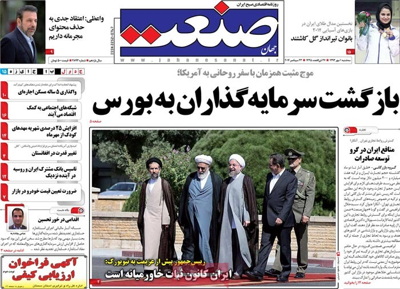 Javan: “Mobile applications [Viber, Tango, WhatsApp] can continue to be used if their potentially law-breaking content is monitored” is the report on the shared approach that the Judiciary and the Ministry of Communications hold to such applications. They both believe that intelligent monitoring and filtering of content should be put in place to prevent fabrications, rumors and offensive messages from changing hands on social networks. Also, they underline the need for the presence of an Iranian rival to compete with them.

Javan: “Criticizing [Ebrahim] Hatamikia, [Abbas] Kiarostami took revenge on the Sacred Defense” is the headline of a story which deals with a barrage of critical remarks between the two Iranian filmmakers. The daily quoted Kiarostami as saying that the films made about the 8-year Iran-Iraq war are meaningless. His response came after Hatamikia said that there is a gap between what people want and what those active on the cinematic stage say. 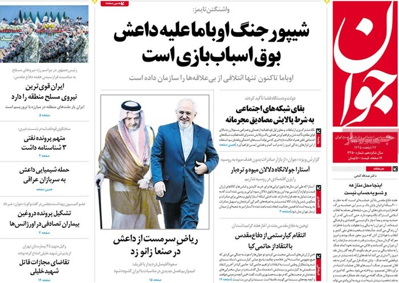 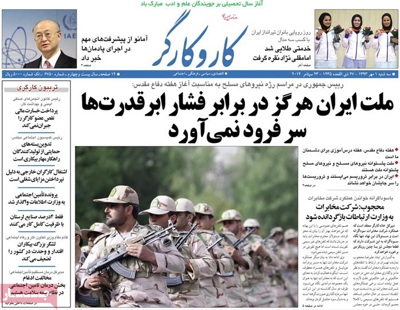 Kayhan: “With revolutionaries in control in Yemen, the government has been forced to sign a [peace] deal.” 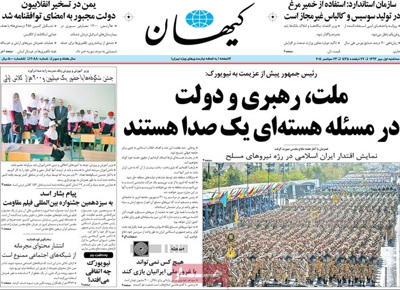 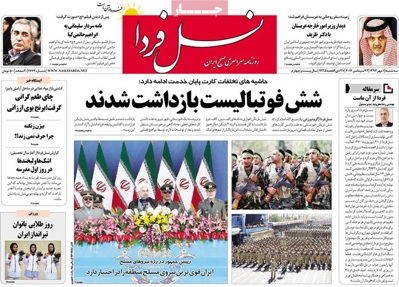 Resalat: “China and Iran are to carry out joint naval exercises,” said Commander of the Naval Forces of the Iranian Army Rear Admiral Habibollah Sayyari. 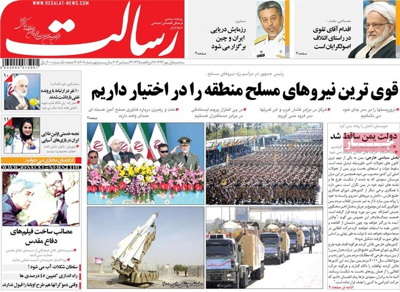 Roozan: “Fatemeh Hashemi [the daughter of Hashemi Rafsanjani] was acquitted.” The paper says about one year ago after Fatemeh Hashemi’s letter entitled “Mr. Larijani [parliament speaker], I wish [my brother] Mehdi were your brother” was posted online, the prosecutor charged her with the spread of fabrications.

Roozan: “Ali Akbar Javanfekr [a vice president under Mahmoud Ahmadinejad] was fined 5 million tomans.” He was charged with disturbing the public opinion and spreading fabrications. 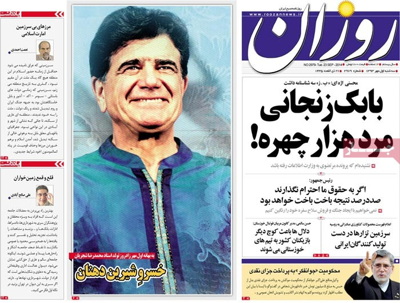 Taadol: “Continued constructions by Tehran Municipality in Madar (Mother) Park in the capital despite President Rouhani’s order for a halt” has taken up a few columns in the daily’s inside pages. 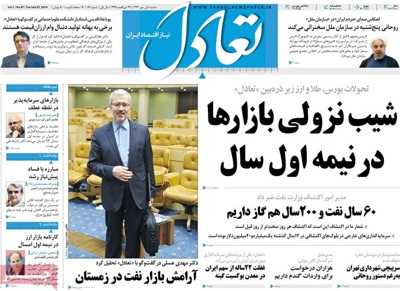 Tafahom: “The detained oil tycoon has used multiple fake birth certificates,” Judiciary Spokesman Gholamhossein Mohseni Ejeie told a press conference. The story is about the corruption case involving Iranian oil tycoon Babak Zanjani, who is mostly referred to by his initials in media as B.Z. The billionaire is heavily indebted to Iran’s Oil Ministry and his case is still under examination by the Judiciary. To bring the press up to speed about the latest in his case, Mohseni Ejeie said that B.Z. illegally contacted people outside jail to cover up his wrongdoings. He concluded 10 people have been arrested in connection with the case. 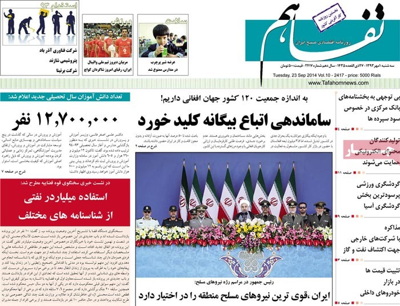