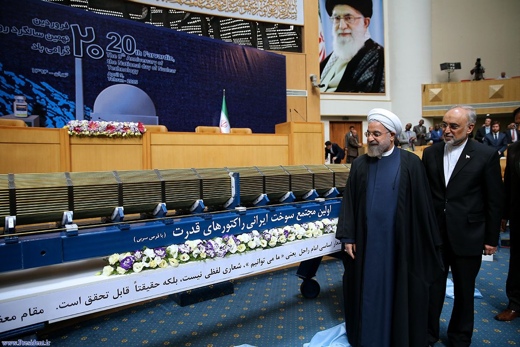 President Rouhani has said that Iran's chief gain in nuclear talks was the fact that the US president admitted that Iranians will not surrender to bullying, sanctions and threats.

Among the achievements unveiled on Thursday were three radio-medicines. President Rouhani delivered an address in the ceremony.

Rouhani said that a statement [a reference to the Lausanne statement] was not Iran’s only achievement in the nuclear talks with P5+1, but that the Islamic Republic’s chief gain was the fact that US President Barack Obama acknowledged that the people of Iran will not surrender to bullying, sanctions and threats.

This is a triumph for our country that the first military power in the world admits this fact, the Iranian president said.

President Rouhani then pledged that all the sanctions on Iran would be removed upon the first day of the implementation of a nuclear deal with the world powers.

He said that the Iranian nation has been and will be the victor in the negotiations.

Rouhani further said that the Iran seeks constructive interaction with the rest of the world.

Pointing to the Saudi air strikes in Yemen, Rouhani said, “Nations will not surrender to bombardment,” adding that the future of Yemen will be determined by its people alone.

He called on the other world nations to adopt the path of moderation as well.