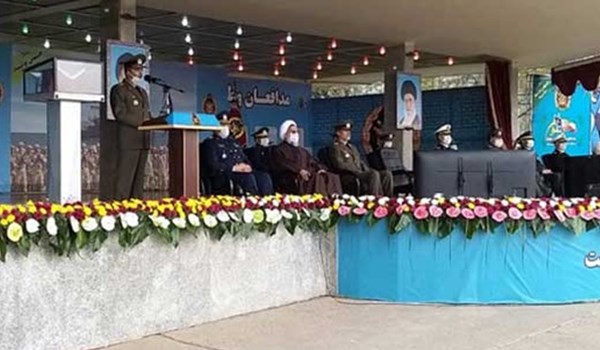 Iran has marked its annual National Army day by replacing usual parades with a COVID-19 aid march of military vehicles designed and packed with supplies to help assist the country’s battle with the coronavirus.

The parades of National Army Day, which took place across the country on Friday, showcased some of the Army’s equipment used to assist the country fight against the outbreak, including mobile hospitals, disinfection equipment and specially designed vehicles.

The convoys of military vehicles were dispatched to assist in disinfection operations and to distribute aid after leaving the premises of the march.

According to the latest numbers released by Iran’s Health Ministry on Thursday, 77,995 Iranians have contracted the disease, and 4,869 others have died. Another 52,229 have also recovered.

Addressing Army Day celebrations, Iranian President Hassan Rouhani said that the usual parades were not possible due to “health protocols”.

He said the Army, along with other branches of the armed forces, were standing side by side with the country’s health personnel in “protecting the lives of the people” from the outbreak.

The Iranian president praised the Iranian Army’s role in assisting the country in other times of need such as during natural disasters.

“Our Army is not a symbol of militarism but a manifestation of supporting the nation and upholding its national interests,” he said.

Also addressing the National Army Day celebrations, Chief Commander of Iran’s Army, Major General Abdolrahim Mousavi said that the Army, along with the Islamic Revolution Guards Corps and the Police, were providing services in 49 cities across the country.

“I have to especially thank the more than 11,000 Army medical personnel serving alongside the country’s health workers,” he added.

“I assure the Iranian nation that the Armed Forces of the Islamic Republic of Iran will be a firm barrier against its enemies and will be patiently and passionately alongside the Iranian people,” he added.

Speaking a day earlier on the occasion of the Army Day celebrations, Brigadier General Kiomars Heidari, Commander of the Iranian Army’s Ground Forces, said new weapons will be supplied to the Army later this year as part of the “Labbaik 2” program.

The program will provide the force with equipment “fitting the Army’s new structure”, he said, including a new weapon replacing the Army’s widely used G3 rifle and three new machine guns.

“In the field of armor, we are currently working on developing the T-90 tank with assistance from the Armed Forces and the Defense Ministry,” he said, adding that tests were underway.

“We have added seven new upgrades on it, including stabilizers and biological defense systems, turning the tank to a future warfare weapon,” he said.

“We hope to receive the first series of tanks in October,” he added.