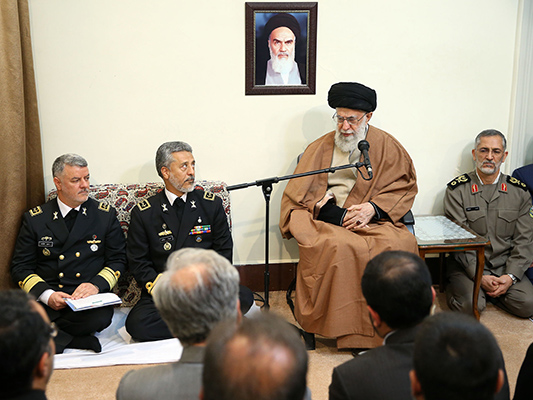 Leader of the Islamic Revolution Ayatollah Seyyed Ali Khamenei has called on the Iranian naval forces to continue their strong presence in international waters.

Speaking in a meeting with the commanders and officials of the Islamic Republic of Iran’s Naval Forces on Tuesday, the Leader hailed the significance of naval forces, saying the Navy is in the frontline of defending the country.

“The Iranian naval forces deal with such important regions like Makran, Oman Sea, and high seas,” said the Commander-in Chief of the Armed Forces, Ayatollah Khamenei, urging that the presence of Iran’s naval forces in high seas should continue like before.

He further highlighted the necessity of enhancing the capabilities of the Navy in terms of equipment, power, and remedying the deficiencies.

“A good growth and movement has been started in the Navy and today, the Iranian naval forces are more advanced and capable than 20 years ago,” the Leader said.

However, he added, such level of progress is not satisfactory, and further development of capabilities should be pursued in all sectors.

Earlier this month, Navy Commander Rear Admiral Hossein Khanzadi announced the country will soon sail warships into the Atlantic and the Gulf of Mexico.

Admiral Khanzadi said the Iranian naval forces would “wave the flag of our country” right on the US’s doorstep.