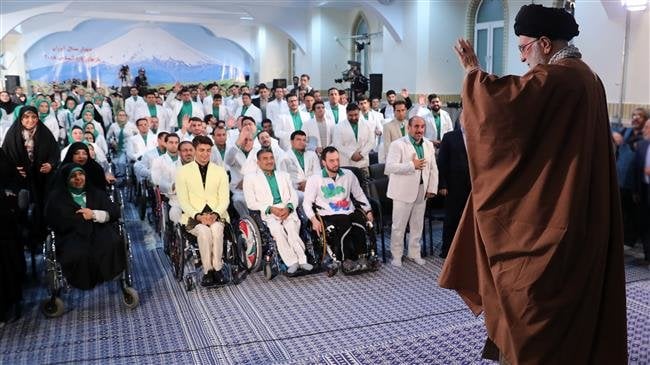 Leader of the Islamic Revolution Ayatollah Seyyed Ali Khamenei has paid tribute to Iran’s Paralympic athletes, who set the country a new record with their performance in this year’s Asian Para Games.

On Wednesday, the Leader met with the athletes, who reaped 136 medals for the Islamic Republic, including 51 golds, in this year’s games in Jakarta, Indonesia, last month. The results landed the country in the third place after China and South Korea in medal count.

“The valuable work you did was to show that if the capacities lying dormant either in human beings or in a country are put into action, it will definitely pave the way for great progress and success,” Ayatollah Khamenei said.

Elsewhere, the Leader praised the female athletes for maintaining their Islamic dress code during the competitions and said that by doing so, they stood up to the global arrogance and confidently preserved their religious and national values.

The Leader expressed confidence that many of the country’s current economic problems will be cured if the innumerable national capabilities are put to use.

Ayatollah Khamenei advised everyone to model their performance after that of the Iranian athletes and to engage their inactive resources in order “to achieve progress and welfare in this world and beyond.”

The Leader finally asked that the country’s sports and youth minister to diligently address the athlete’s demands.