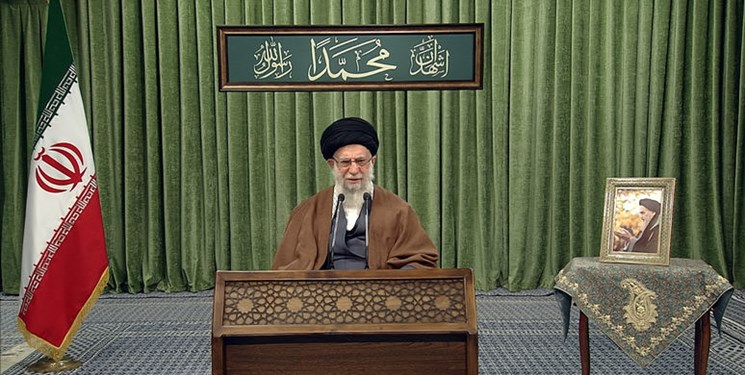 Ayatollah Khamenei said “some rulers suffered humiliation by insulting the Prophet” whose cartoons were published by the French satirical weekly magazine Charlie Hebdo.

“Backing cultural savagery and the criminal act of a caricaturist is another side of the coin of support for MKO terrorists and [former Iraqi dictator] Saddam [Hussein],” said the Leader in a televised speech on the occasion of Prophet Muhammad’s birthday anniversary.

“The Islamic community’s anger and protest at this event indicates that the Muslim world is alive,” Ayatollah Khamenei said.

The Leader noted a lesson should be learned from this development.

“The French government links the event to human rights and freedom of expression. This is the same policy that is associated with the world’s most violent terrorists, i.e., terrorists who [in the past] killed our president, judiciary chief, prime minister and a number of officials as well as 17 thousand people in our country,” the Leader noted, referring to the MKO terrorist group.

He said France is one of the governments which helped Iraqi strongman Saddam Hussein during the eight-year Iraqi-imposed war on Iran in the 1980s.

“They claim they favour freedom and human rights and the like,” said the Leader.

The Leader further reffered to the moral collapse of the US regime as an example.

He said The United States has fallen into a substantial decline and Washington’s regime will not live long.

Ayatollah Seyyed Ali Khamenei said the White House itself has admitted that the US is nosediving.

“To be fair, the US regime has gone into a dramatic political, civil and moral decline. What I’m saying is not an analysis. It is something that they themselves are saying,” the Leader said.

“This is the word of their own spokespeople as well as authors and thinkers inside the United States,” Ayatollah Khamenei said.

“Over the past several years, they have written a number of books which have been published in high circulation inside the US,” he noted.

“These books shed light on some facts,” the Leader said.

Ayatollah Khamenei said one of these books, which has been translated into Persian, is full of evidence indicative of the “decline of the US political system due to moves by the US president.’

“Such an empire won’t last long,” the Leader stressed.

“It is obvious that when a regime gets to this point, it will not last long and will explode,” he said.