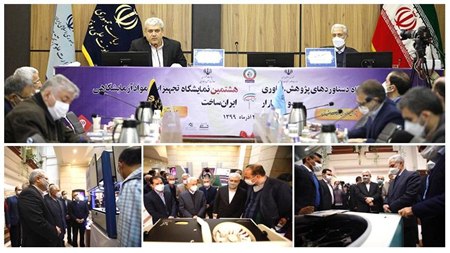 The 8th edition of the Iranian Laboratory Equipment and Chemicals Exhibition (Iran LAB EXPO 2020) has opened with the participation of universities, technology parks and research centres.

The exhibition of Iranian-made laboratory equipment, held in Tehran during the Iranian Week of Research and Technology, has coincided with the 21st exhibition of the research and technological achievements.

In remarks at the opening of Iran LAB EXPO 2020 on Thursday, Vice President for Science and Technology Sorena Sattari hailed the exhibition as a major breakthrough in the development of Iranian products, saying the event has created a new culture in the production and purchase of homegrown products over the past seven years and has accelerated the growth of knowledge-based companies.

The rapid pace of progress in Iran’s technology and innovation ecosystem has brought new achievements into everyday lives of people, the vice president noted.

Pointing to the formation of 43 technology parks in Iran, Sattari said the local technology ecosystem has been completed with the creation of around 10,000 startups and 5,500 knowledge-based companies.

The vice president for science and technology also noted that the domestic knowledge-based companies had a total sale of 120 trillion tomans in the past Iranian year and created employment for 300,000 people.

Highlighting the role of the domestic technology ecosystem in attracting the Iranian elites abroad, the vice president said some 2,000 Iranian students graduated from the world’s top 100 universities have returned home to work in the knowledge-based companies founded by themselves.

In separate remarks at the event, Iranian Minister of Science, Research and Technology Mansour Gholami lauded the growing position of research in the country, saying the universities and research centers have realized the significance of technological research.

He also stressed the need to prepare the market for Iranian products, saying the export of homegrown items is the only way to get rid of an oil-based economy.

In another speech at the opening of the exhibition, the deputy head of the Science and Technology Department of the Presidential Office for innovation and commercialization, Payman Salehi, said the exhibition offers an opportunity for uninterrupted sale and purchase of products for one year.

He said more than 350 exhibitors have taken part in this year’s exhibition to offer more than 9,000 items, describing the expo as a win-win interaction between the private sector and the government.

Deputy Minister of Science, Research and Technology Gholam-Hossein Rahimi also took the podium to praise the remarkable advances in the development of knowledge-based products, saying nearly all Iranian universities and research centers have been equipped with homegrown products under the auspices of the Vice Presidency for Science and Technology.

According to Rahimi, 2,938 technological products and services have been offered at the 21st exhibition of the research and technological achievements, which is attended by 1,387 universities, 664 technology parks, 272 research centers, 466 development centers, and 149 technology companies.