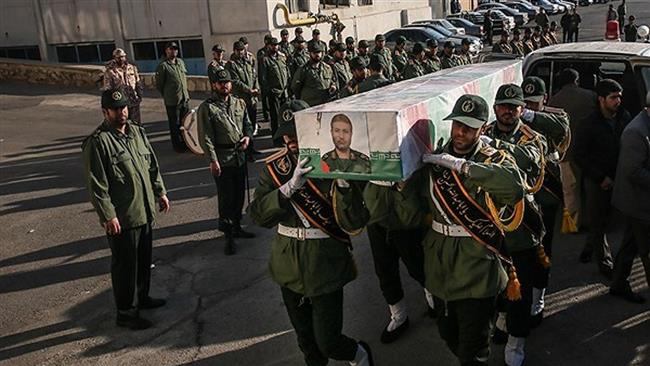 A funeral procession has been held for a senior Iranian military commander who was recently martyred in an airstrike carried out by an Israeli helicopter on Syria’s occupied Golan Heights.

The ceremony was held in the Iranian capital, Tehran, on Wednesday with military top brass and a number of senior state officials in attendance.

Brigadier General Mohammad Ali Allahdadi was killed in the Israeli attack on January 18 along with six members of the Lebanese resistance movement, Hezbollah.

Addressing the event, the commander of Iran’s Islamic Revolution Guards Corps (IRGC), Major General Mohammad Ali Jafari, said the composition of those killed in the attack, clearly proved the unity among the Islamic Ummah because they came from various backgrounds and were trying to restore security to Syria.

Meanwhile, Deputy Chief of Staff of Iran’s Armed Forces Major General Mostafa Izadi said on the sidelines of the ceremony that Tehran will continue to back the resistance front and provide advisory support to those fighting in this front.

The mourners who attended the funeral also chanted “Death to Israel” and “Death to the US.”

Following the procession, the Iranian commander’s body was transferred to Kerman Province, where he is to be buried in his hometown.

Allahdadi had traveled to Syria to provide consultation and help the Syrian government and nation counter the Takfiri and Salafi terrorists in the country.

On Tuesday, IRGC’s commander said in a statement that the elite forces will continue to help the anti-Israeli axis of resistance in the Middle East until full obliteration of the Zionist regime.