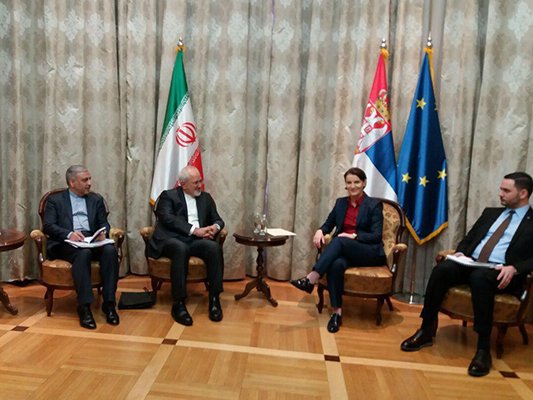 Iranian Foreign Minister Mohammad Javad Zarif has held talks with Serbia's Prime Minister Ana Brnabić as part of his meetings with the country’s officials in Belgrade.

During the Tuesday meeting, the two sides looked into various dimensions of bilateral relations.

They also talked about the issue of Kosovo, cooperation between Tehran and Belgrade at the international communities, and boosting of economic and cultural ties.

Preparations for expansion of parliamentary, military, scientific, cultural, and agricultural relations, and the exchange of academic and advanced technologies were among other key issues discussed.

The parties also consulted on a number of international and regional issues.

Zarif embarked on a tour of the Balkans and Eastern European countries on Monday, starting with Serbia. Bulgaria, Croatia and Bosnia and Herzegovina are the next destinations of FM Zarif and his accompanying delegation.