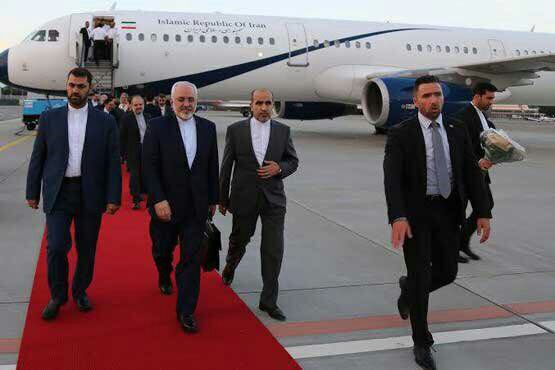 FM Zarif, along with his deputies Seyyed Abbas Araqchi and Majid Takht-Ravanchi, arrived in New York to attend a series of international meetings and press conferences of the United Nations.

The Iranian foreign minister plans to attend the UN’s annual political forums, which have started on July 10 and will be underway until July 19.

A delegation from Iran’s Environmental Protection Organization is also accompanying Zarif in this trip.

The High Level Political Forum on Sustainable Development (HLPF) in 2017, one of the forums Zarif will attend, will be held based on the theme of “Eradicating poverty and promoting prosperity in a changing world”.

Leaders, heads of state, senior members of civil society and businesses, academics and other experts from around the world will take part in the UN General Assembly’s political forums.

According to Foreign Ministry Spokesman Bahram Qassemi, the top Iranian diplomat is also scheduled to sit down with scholars and officials from different countries on the sidelines of the conference.

Zarif will also deliver a speech at the Council on Foreign Relations (CFR) in a ceremony attended by CFR chairman Richard Haass on July 17, 2017, the spokesman said earlier.