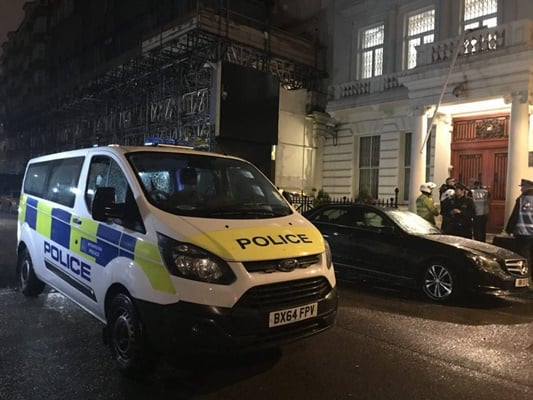 Iran’s Foreign Ministry says the British government has officially apologized over the storming of the Iranian Embassy in London by a few assailants, and the UK police has arrested all of them.

In a statement on Friday, Foreign Ministry Spokesman Bahram Qassemi said the London police has arrested the four supporters of a radical group residing in the UK after they climbed onto the balcony of Iran’s embassy building and disrespected the Iranian flag.

He said the incident was “just for show” and is over now.

Qassemi also called for the prosecution and punishment of those behind the raid.

“Immediately after the incident was reported, Dr. Araqchi, the [Iranian] deputy foreign minister for political affairs, expressed the Islamic Republic of Iran’s strong protest to the British ambassador to Tehran and demanded that the UK police fully protect our diplomats in London and immediately deal with the assailants,” said Qassemi.

According to Qassemi, the British ambassador to Tehran extended the British government’s official apology.

Qassemi quoted the top British diplomat as saying that the UK riot police are present at the scene and have the situation under control. According to the British ambassador, the necessary measures have been adopted to protect the lives of Iranian diplomats and to keep the attackers from breaking into the embassy building.

The Shirazi cult, also known as the British Shiites, was behind the attack. They are influenced by a person called Sadeq Shirazi, whose supporters, including Yasser Habib, the owner of the satellite TV network Fadak, are generally known for spreading divisive views in the Muslim world. The network broadcast the storming of the Iranian embassy in London live.

Leader of the Islamic Revolution Ayatollah Seyyed Ali Khamenei hinted at the cult and its activities back in 2016.

“You see some radio or TV stations have emerged in the world of Islam which, posing as Shiites and in the name of Shiites, curse great scholars respected by the other Islamic faiths; it is clear that they are funded by the UK Treasury. They are financed by Britain.

“This is UK-style Shiite Islam,” said the Leader.