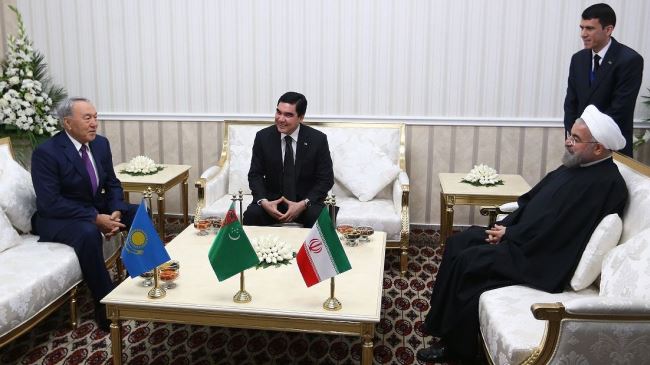 The Iranian president says that development of ties with neighbors is a top priority of Iran’s foreign policy, adding Tehran is keen to have expanded relations with Turkmenistan and Kazakhstan.

President Hassan Rouhani says the Islamic Republic is keen to further expand relations with its neighbors, especially Turkmenistan and Kazakhstan.

“Expansion of ties with neighbors is a top priority of Iran’s foreign policy,” Rouhani said in a Wednesday meeting with his Kazakh and Turkmen counterparts, Nursultan Nazarbayev and Gurbanguly Berdimuhamedow, in the Turkmen city of Inche Boroun.

Referring to the recent inauguration of a railroad connecting Iran to the two Central Asian neighbors, Rouhani said the move would prepare the ground for the enhancement of trilateral and regional relations.

“We must make efforts [to forge] closer ties in order to establish stronger peace, stability and security in the region and set the stage for the promotion of trilateral relations,” Rouhani added.

The Iranian president also said the formation of a joint commission will step up economic cooperation among the three countries, adding that Iran’s private sector is ready to work with Turkmen and Kazakh companies.

Nazarbayev, for his part, said that the railroad aims to strengthen interactions among regional states.

The Turkmen president emphasized Iran’s significant role in the region and said trade with the Islamic Republic, which has a strong economy, could help the economic development in his country.

Berdimuhamedow also stressed that the railroad would pave the way for many achievements for the three neighboring states in economic and political areas.

The three presidents on Wednesday attended a ceremony to put the railroad into service in Inche Boroun on the Iran-Turkmenistan border.

The railway can connect great countries like Russia, China, Pakistan, Turkey and Iraq to the Persian Gulf and the Sea of Oman. It is 920 kilometers in length and will shorten the distance between the Persian Gulf, Central Asia and Europe.