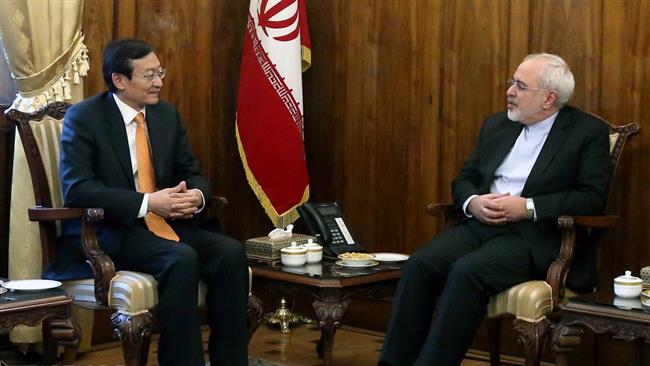 Iran’s Foreign Minister Mohammad Javad Zarif says the Islamic Republic has so far exercised patience with regard to negative measures adopted by Saudi Arabia as Riyadh steps up its hostile policies against Tehran.

“We have so far responded to negative Saudi measures with patience because there is a distance between Iranian wisdom and Saudi officials’ misguided and immature approaches,” Zarif said in a meeting with China’s Vice Minister of Foreign Affairs Zhang Ming in Tehran on Saturday.

“We are not after tension in the region,” the Iranian minister added.

Saudi Arabia severed diplomatic relations with Iran on January 3 following demonstrations held in front of the Saudi embassy in Tehran and its consulate in the northeastern city of Mashhad by angry protesters censuring the Al Saud family for the killing of Nimr. Some people mounted the walls of the consulate in Mashhad while incendiary devices were hurled at the embassy in Tehran. Some 50 people were detained over the transgression.

In a Friday letter to United Nations Secretary General Ban Ki-moon, Zarif said Saudi Arabia has to make “a crucial choice” to either promote “sectarian hate-mongering” by its continued support for extremist groups or promote regional stability.

He added that Tehran has “no desire or interest in escalation of tension in our neighborhood” and hopes Riyadh will “heed the cause of reason.”

Meanwhile, speaking in a press conference after an extraordinary meeting of the foreign ministers of the [Persian] Gulf Cooperation Council in Riyadh on Saturday, Saudi Foreign Minister Adel al-Jubeir repeated the kingdom’s anti-Iran rhetoric and said Riyadh is considering “additional measures” against Tehran if it “continues with its current policies.”

During his meeting with the Chinese diplomat, Zarif also said that Iran and China have numerous commonalties on different issues.

He added that Tehran will continue to expand relations with Beijing following the implementation of a nuclear agreement reached between the Islamic Republic and six world powers in July 2015.

The Joint Comprehensive Plan of Action (JCPOA), reached between Iran and the P5+1 – the United States, Britain, France, China and Russia plus Germany – in the Austrian capital of Vienna on July 14, 2015, puts limits on Iran’s nuclear activities in exchange for the removal of all economic and financial nuclear-related sanctions against the Islamic Republic.

The Iranian minister expressed hope that a planned visit by Chinese President Xi Jinping to Tehran in the near future will bring about positive outcomes for the two countries.

He also hoped that Iranian and Chinese officials would open up prospects for comprehensive cooperation during Xi’s visit to Tehran.

The Chinese official, for his part, said Iran and Saudi Arabia play an important role in regional developments.

Iran pursues wise foreign policies, the Chinese official said, adding that his country would spare no effort to contribute to promotion of peace and security.

He also expressed Beijing’s full readiness to bolster relations with Tehran and said the Chinese president plans to visit Iran in the near future for the first time after 14 years.