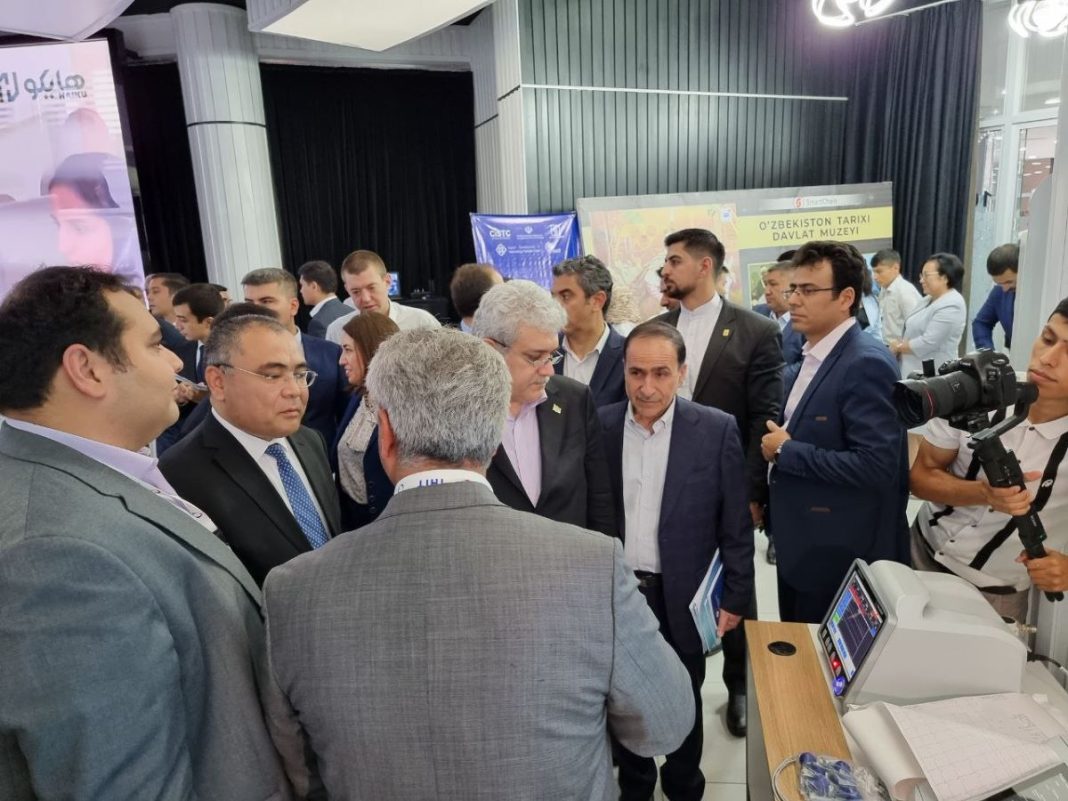 During his visit to Uzbekistan, Vice President for Science and Technology Sorena Sattari held a meeting with Uzbekistan’s Deputy Prime Minister and Minister of Investment and Foreign Trade Jamshid Kuchkarov for talks on the expansion of scientific and technological relations between the two countries.

The two sides emphasized the significance of enhancing bilateral ties and promoting the level of scientific, cultural and economic cooperation between Iranian knowledge-based and creative firms and their Uzbek counterparts.

Sattari said that there was a good opportunity for the enhancement of economic ties and cooperation between Iranian and Uzbek scientists and elite, adding, “One of the priorities of the Vice Presidency for Science and Technology, regarding the expansion of ties between the two countries, is to broaden university exchanges.”

“Such exchanges lead, in a way, to the expansion of cultural communications. Currently there are 7,000 knowledge-based and creative companies active in Iran in technological areas, which can speed up the enhancement of scientific ties and tech cooperation between Iran and Uzbekistan. Of course, this depends on tackling some existing challenges such as the issue of visa. The main problem facing relations between Iranian and Uzbek knowledge-based firms is the visa issue, which we hope will be resolved,” Sattari said.

“Iranian knowledge-based and creative firms have based their activities on innovation. Many of Iran’s problems as well as economic and social challenges have been overcome thanks to the same innovative measures. Tomorrow, around 80 knowledge-based and creative companies will take part in a joint meeting with the corresponding Uzbek firms so that they can increase their presence in this country besides presenting their capabilities and products,” the senior official said.

Sattari added, “Our companies have presented a variety of products in the fields of information and communication technology, medical and laboratory equipment, nanotech, ecotechnology, stem cells, and advanced technologies, which can help fulfill the needs of Uzbekistan.”

Bilateral cooperation between technological firms can take place within the framework of mutual investments so that the firms can introduce their products and engage in tech exchanges,” he added.

Sattari went on to say, “Under a host of sanctions, Iran has succeeded, over the past years, in developing indigenous technologies and capabilities in different fields, and we stand ready to share them with the other side’s companies.”

“The high quality of Iranian products and, of course, the more reasonable prices compared to foreign models are among the advantages of Iranian technologies. Iranian tech firms have developed technologies in the maritime field and in terms of access to deep seas, which can facilitate transfers between the two states.

‘Formation of joint Iran-Uzbekistan working group is a must’

In turn, the Uzbek deputy premier described as positive the expansion of bilateral ties and stepped-up activation of relations in recent years.

“Within the framework of this meeting, we want to discuss the promotion of bilateral relations. Mutual economic and commercial cooperation is also in focus,” he said.

The two sides, he said, also seek to expand cooperation in petrochemical, textile and technological products, adding, “We have plans for the expansion of trade between the two countries, which will be followed up on. I hope that the joint working group will pursue joint cooperation between the two countries and the negotiations will bear fruit on the back of team work. In line with the tasks of this working group, we can deal with cooperation in the spheres of technology and economy.”

Kuchkarov pointed to the trip to Iran and visits paid to Iranian technological sector, saying he is certain that Sattari’s trip to Uzbekistan will help the enhancement of the activities of start-ups and knowledge-based firms active in tech-related fields.

He highlighted Iran’s achievements in the fields of nanotechnology, ecotechnoloy, and stem cells, as well as cooperation between knowledge-based firms, expressing hope that joint cooperation in such fields will be expanded.

The Uzbek official added that there were many areas for bilateral cooperation in the field of joint production of agricultural items via the transfer of the management of agricultural land and exchange of experience and technology in the area of agricultural research.

Heading a delegation of 40 knowledge-based and creative companies, Sattari travelled to Uzbekistan to pave the way for the development of technological and scientific exchanges between the two states.

Technological firms, which operate in technological fields such as agriculture, animal husbandry and health will take part in expert meetings with 150 corresponding Uzbek companies and will work to increase their share of Uzbekistan’s market.

Meanwhile, an exhibition is being held in Uzbekistan putting on display 100 products from 80 Iranian creative and knowledge-based companies. Managers of Uzbek tech firms and businesspeople will visit the exhibition, in what could be an opportunity for Iranian knowledge-based and creative products to make their way into this country’s market and the broader Eurasia region.