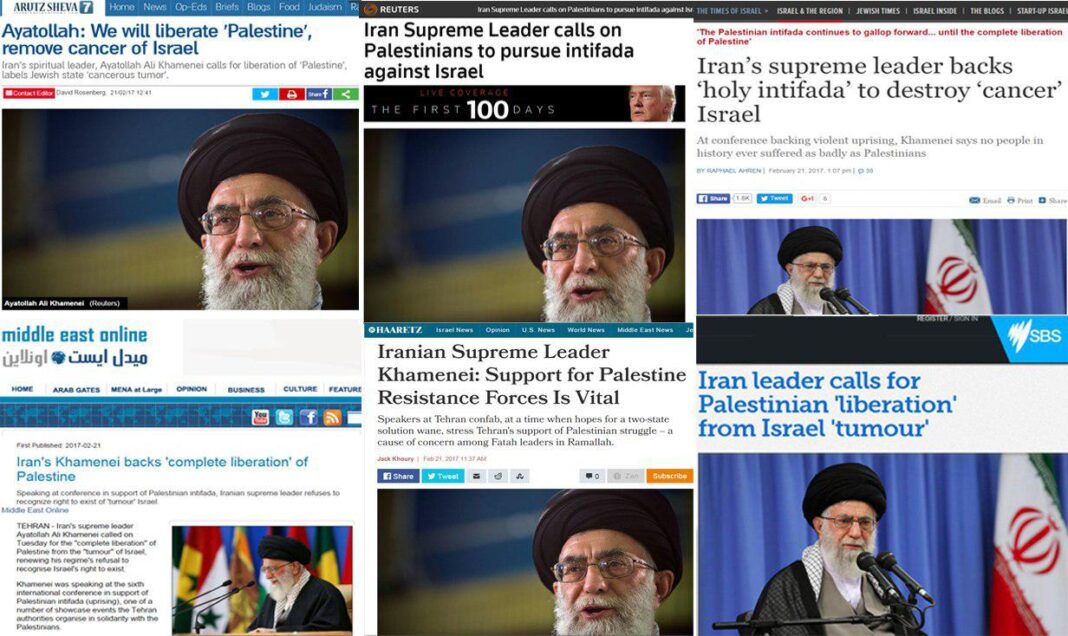 The statements made by Iran’s Leader at the opening ceremony of International Conference on Palestine Intifada in Tehran were widely covered by international, particularly Israeli, media.

According to a report by IFP, the sixth International Conference on Palestine Intifada was held in Tehran on February 21 and 22. Attended by more than 700 participants from 70 countries, the two-day conference was kicked off with a speech by Ayatollah Seyyed Ali Khamenei, the Leader of Iran’s Islamic Revolution.

The Palestine conference provoked wide reactions among the international media, the Israelis in particular, which mostly focused on the statements of Ayatollah Khamenei at the opening ceremony.

Reuters was one of the first international media to quote the statements of Iran’s Leader in the first day of conference. In an article titled “Iran Supreme Leader calls on Palestinians to pursue intifada against Israel”, Reuters also wrote about the Israeli Prime Minister’s efforts to attract the support of new US administration for further severe actions against Iran.

By highlighting the need to comprehensively support the resistance groups, and inviting the Islamic countries to unite behind the common ideology of Palestine, Iran hugely worried the Zionist Regime of Israel that has been taking advantage of conflicts between the Middle East’s Islamic countries in recent years.

In a commentary titled “Iran’s supreme leader backs ‘holy intifada’ to destroy ‘cancerous’ Israel”, the Jerusalem-based online newspaper Times of Israel expressed concerns over Iran’s support of Palestine, and wrote, “Calling Israel a ‘cancerous tumor’, Iran’s supreme leader on Tuesday expressed support for a ‘holy intifada’ to eradicate the Jewish state, arguing that the international community is headed toward confrontation with the ‘Zionist regime’.”

Haaretz newspaper also reacted to the Palestine conference, pointing to Iran Leader’s remarks on the vitality of support for Palestinian resistance forces, as well as the statements of Ali Larijani, Iranian Parliament speaker, and the attendance of Salim al-Zaanun, a member of Fatah’s central committee, in the conference.

Arutz Sheva, a fanatic Zionist-supported Israeli network, wrote, “Iran’s spiritual leader, Ayatollah Ali Khamenei, called for the ‘complete Liberation of Palestine’ on Tuesday, and slammed the Jewish state as a ‘cancerous tumor’,” in an article titled “Ayatollah: We will liberate ‘Palestine’, remove cancer of Israel”.

Ayatollah Khamenei’s emphasis on the complete liberation of Palestine, and denial of the Western conciliatory approaches to the issue of Palestine also attracted the attention of regional and international media.