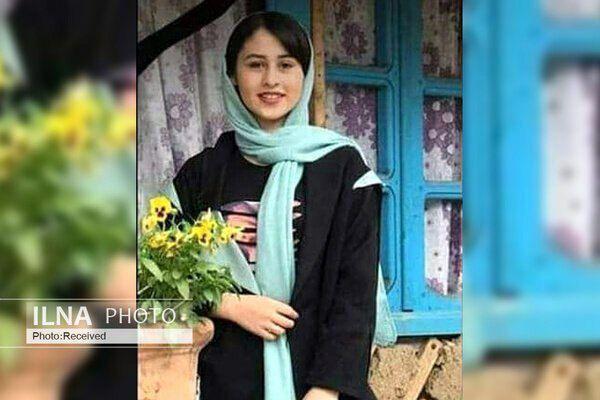 The murder of a 14-year-old Iranian girl by her father coupled with a legal provision which does not allow the father to be served with eye-for-an-eye retribution has sent shockwaves across the nation and social media in Iran.

A furious man has, in a heinous move, murdered her 14-year-old daughter. The man, who is in detention, claims the murder was an honour killing. Of course, he will not be penalized under the eye-for-an-eye law of retribution as he himself is the next of kin of his slain daughter, i.e., the one who is entitled to demand blood money.

On May 21, 2020, the crime was committed in one of the villages of the town of Talesh in northern Iran that sent shockwaves across the nation.

It is the story of a man who sickled to death his 14-year-old daughter Romina because she had run away from home with a 29-year-old man Bahman.

After the father was apprehended, he claimed that his daughter had eloped with that boy and wanted to marry him, but that he (the father) disapproved of that marriage because they had a large age difference and that basically he believed the marriage would not be in the best interests of her daughter. He says the boy finally deceived her daughter into running away from home.

“On the day of the incident, I was so furious at what had happened that I went insane for a second and killed my daughter with a sickle. I only wanted to scare her. Now I really regret it and will never forgive myself,” said Romina’s father in his confessions. 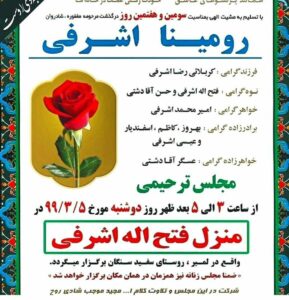 A few days on since her murder, the image of her obituary leaflet has gone viral on social media. The announcement mentions the name of the murderer on top as the father of the deceased, making the atmosphere on social media all the more tense and prompting users to react. The reactions mostly revolve around the issue of “violence against women that sometimes just stops short of honour killings.”

Among the details of Romina’s murder case, one point worth mentioning is that Romina had been forced to return home.

When the girl ran away with the man, the father filed a lawsuit, and Romina was finally arrested. At the court, the girl begged the judge not to let the father take her home again, but the father kissed her hands in front of the judge and promised he won’t harm her. The judge was convinced and let her go home. The crime was committed later that day.

Reza Jafari, the deputy head of the Rehabilitation Department of Gilan Province, says Romina’s murder at the hands of her father is an example of blatant violation of the rights of a child by a person who had been expected to offer the most support to her child in order to properly bring up and rear her.

“Due to the nature of the crime, the prosecutor has got involved in the case as public prosecutor in accordance with Article 5 of the Children and Youth Support Act, and the Rehabilitation Department, as an organization backing children’s rights, will try its utmost to restore the inalienable rights of this child.

“The Social Emergency Department of the town was informed through official channels after the murder had taken place,” said Jafari.

“Before that, we didn’t know of that family row,” he added.

He said if the family had contacted the Social Emergency Department before the crime was committed, both the child and the family would have had a better destiny.

Among all developments pertinent to Romina’s murder, what has prompted the strongest public reaction is the possible punishment of her murderer who happens to be her father.

“Definitely, no ruling will be issued to mete out an-eye-for-an-eye punishment for her father. Only with regard to the public dimension of the crime, the convict will be imprisoned or, in some cases, banished. Generally speaking, in such cases, the father will not be sentenced to eye-for-an-eye retribution, but he may be served with prison sentence of 3 to 10 years at the discretion of the judge, and could be sentenced to paying blood money. And the blood money, in the first place, shall be given to the mother first, then the sister and brother,” he added.

Vice President’s Order to Follow up on Murder Case

Iranian Vice President for Women and Family Affairs Masoumeh Ebtekar has called for further action to be taken to look into Romina’s murder case. She asked the official in charge of citizens’ rights working at her office to pursue the matter as soon as possible.

Forecasts about parents’ punishment have once again brought into spotlight a controversial article that the Guardian Council reacted to, while studying a bill on supporting children and youth’s rights. Parliament has been asked to put the bill on top of its agenda.

The bill has been reviewed and ratified by Parliament and sent to the Guardian Council. Although the council has, so far, found fault with bill three times, the bill still awaits final reconsideration by the council. According to Ebtekar, this is the last time that the Guardian Council will express its view on this bill and the contentious article on the punishment of irresponsible parents, and that if the fault that the council has found with the article is corrected, part of “our main concerns will be removed, too.”

The vice president has called on Parliament to expedite the procedure to pass the bill.

Another Victim of “Honour” in Iran

Since the word “honour” entered humans’ language, it has taken more victims than all world wars have. Its victims are sometimes men, but mostly women.

International organizations such as the United Nations Population Fund suggest that honour and shame killings take some 5,000 lives across the world annually. Some surveys suggest the most common murders in Iran, i.e. 20 percent of all murders and 50 percent of family killings, are related to sexual and honour issues.

Academic papers and university theses and dissertations that deal with this issue suggest between 375 and 450 honour killings occur each year. The rate is higher in provinces where ethnic group and clan culture prevails. The rate of honour killings in Khuzestan, Kurdistan, Ilam and Sistan-Baluchestan is higher than that of other areas.