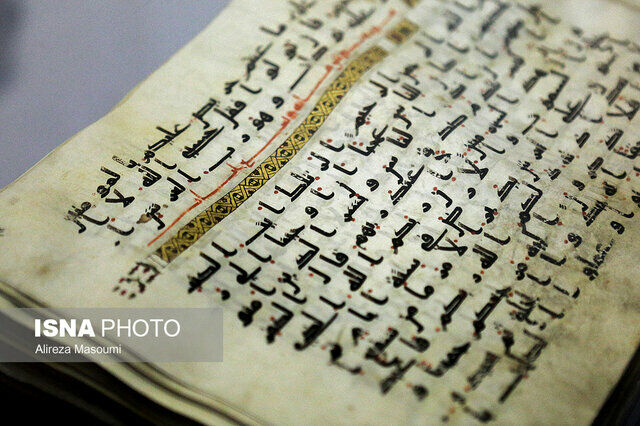 Iran has unveiled an old manuscript of the holy Quran, which is attributed to Imam Ali, the first Shiite Imam, and considered one of the oldest and most complete manuscripts of the holy book.

The manuscript was unveiled in a ceremony in the Museum of Quran in Imam Reza shrine (eighth Shiite Imam) in the north-eastern city of Mashhad on the first day of the holy Islamic month of Ramadan.

This is one of the most ancient and significant manuscripts of Quran in the world, which was endowed by Shāh Abbās the Great (the 5th Safavid King of Iran) in 1601 to Imam Reza Shrine. The endowment has been registered at the back of the first cover of the manuscript by then leading Shiite clergy Sheikh Baha’eddin Mohammad.

A comparison between this version and other manuscripts reveals its unique nature. It is a highly valuable manuscript with various splendid features in terms of its orthography and the arrangement of verses. The manuscript begins with Al Fatihah and ends with An-Nas surah.

Each page of the Kufic script has 16 lines. It dates back to the early years of Islam. Experts estimate that the manuscript has been put together in Iraq’s southern city of Basra.

In an address to the unveiling ceremony, Mohammad Reza Rezapour, an expert in Quran manuscripts, said the book is made of deer skin.

“Some sources also say it is made of cow and sheep skins. And the dimensions of its pages are 20×26 and 25×32 centimetres. The quality of the pages as well as the ink used reveal its good and valuable quality,” he said.

About 90,000 ancient manuscripts are held in the Museum of Quran in Imam Reza shrine including over 100 copies of the holy Quran dating back to first to third lunar centuries. At least eight of the manuscripts are attributed to eight Shiite Imams.