The Pahlevan Razzaz guesthouse, a historical building in downtown Tehran, has been turned into a hostel for foreign tourists.

Capable of accommodating 44 people, the new hostel was inaugurated in Tehran’s historical quarter on Yalda Night, which was marked last Friday.

The building enjoys an ancient architecture and is scheduled to function as a historical hostel to host foreign visitors as of January 1, 2019.

The building is one of the invaluable houses located in Tehran’s Pamenar neighbourhood. It was converted into a hostel for foreign tourists after years by Ali Jafarnejad, an investor who is active in the field of tourism. 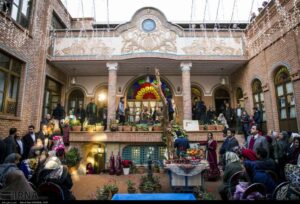 Talking to reporters, he elaborated on his motivation for turning the building into an accommodation.

“I had been interested since 15 years ago to set up a hostel in Iran,” he said. “Because in the early years when I travelled abroad I would stay in hostels and they were inexpensive.”

“I was keen to establish such an accommodation in Tehran. So, I searched among old neighborhood in Tehran until I came across this house. The building was less damaged [than other old buildings] because it was still inhabited by people,” he noted.

“The house had been restored with the permission of the cultural heritage [organization], and it is around 50 percent different from what it originally looked before,” said Jafarinejad. According to him, the building is going to only host foreign tourists

When Jafarnejad began to work on this house he did not know what its history was. After talking to locals, he found out that the building used to be the house of Hassan Shoja’at known as Hassan Razzaz (1878-1941), a renowned athlete and Bastani practitioner during the Qajar and Pahlavi eras.

He was known as the hero of bravery, very popular among other athletes and the No. 1 Pahlevan (Bastani practitioner) of Tehran at the time.

Pahlevan Razzaz was an advocate of constitutionalism, so he was behind bars for some time. His house was one of the luxurious mansions at the time and included different rooms. It is not clear when it was built, but the Shoja’at family’s ownership of the house began in 1891.

So, Jafarnejad is using Pahlevani symbols while decorating the building to turn it into a hostel.

What follows are IRNA’s photos of the building: