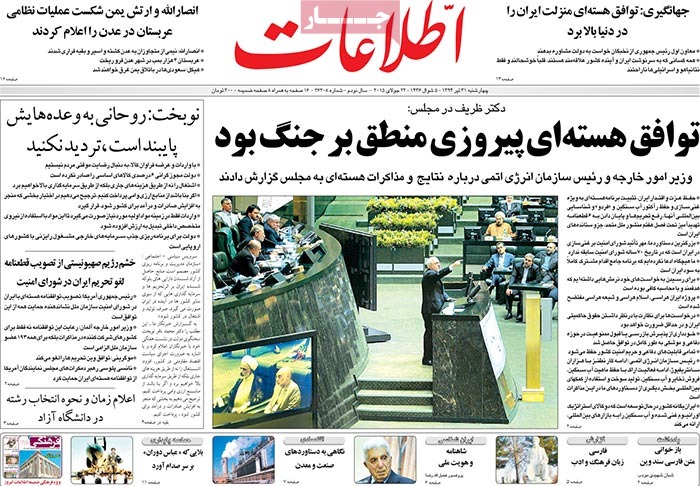 A special look at the headlines Ettela’at newspaper covered on July 22.

♦ “The nuclear deal amounted to the victory of logic over war,” Foreign Minister Mohammad Javad Zarif said Tuesday as he presented a report to deputies on the agreement he and his team struck with P5+1 over Tehran’s nuclear program.

“All those who care about Iran and its future are happy from the bottom of their hearts. Israelis, especially Netanyahu, are the only ones who are sad,” the vice-president said.

Jahangiri also called on the elite to hold consultations with the government.

♦  Ansarullah and the Yemeni Army announced that the Saudi military operation in Aden has failed.

Ansarullah said that half of the aggressors have died and the other half either have been captured or have fled.

“We don’t seek to glut the market with imported goods to secure the temporary satisfaction of the public; government is holding consultations with the Europeans to work out plans to secure the inflow of foreign capital,” said the spokesman.

♦  The Zionist regime is angry at the adoption by the UN Security Council of a resolution that lifts the anti-Iran sanctions.

In the US, House Minority Leader Nancy Pelosi has thrown her weight behind the Iran nuclear deal.