Highlights of Ettela’at newspaper on August 23 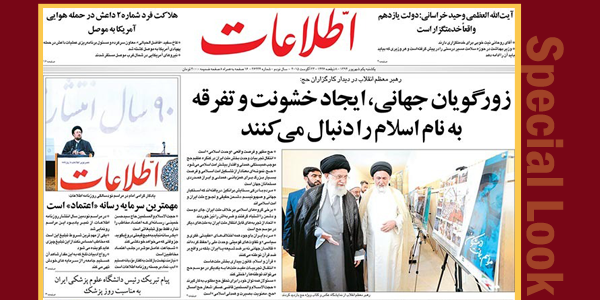 A special look at the headlines Ettela’at newspaper covered on August 23.

♦ “Global bullies are pursuing violence and division in the name of Islam,” said the Supreme Leader at a meeting with Hajj officials.

♦ Grand Ayatollah Vahid Khorasani has said that the 11th government is genuinely serving the interests of the nation.

The Shiite source of emulation further said the health minister has chosen the right path on the healthcare front and anyone who replaces him should walk down the same path.

♦ The second in command of IS terrorist organization has been killed in a US airstrike on Mosul.

It came as American forces took position to the northwest of the Iraqi city which is under IS control.

♦ “Trust is the most important asset of the media,” said the grandson of the late Imam Khomeini.

Seyyed Hassan Khomeini said media outlets that do not have the trust of the public are simply a propaganda tool.

♦ The chairman of Iran University of Medical Sciences has issued a message of congratulations to mark Doctor’s Day.