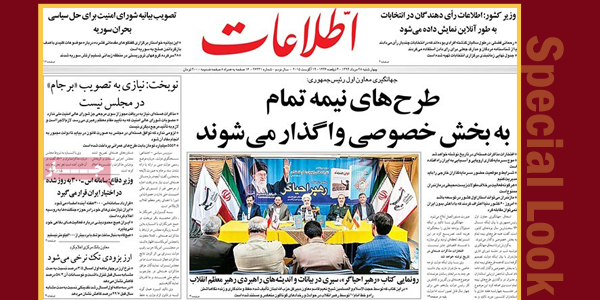 A special look at the headlines Ettela’at newspaper covered on August 19.

♦ “Unfinished projects will be given to the private sector to be completed,” First Vice-President Eshagh Jahangiri said.

♦ “Details of voters will be available to electoral authorities online [to prevent electoral fraud],” said the interior minister.

Rahmani Fazli further said that over the years there have been instances of individuals casting ballot more than once or using fake IDs to vote.

♦ The UN Security Council voted for a statement calling for a political solution to the Syrian crisis.

In another development, 28 leaders of terror groups operating in Syria surrendered to the Syrian Army.

♦ “The Joint Comprehensive Plan of Action does not need to be approved by parliament,” said Government Spokesman Mohammad Bagher Nobakht.

♦ The defense minister has said that an updated version of Russia’s S300 will be delivered to Iran.

The agreement on the delivery of the missile defense system will be signed next week.

♦ The lieutenant governor of the Central Bank of Iran has said that a single foreign exchange rate will be introduced shortly.

He further said liquidity growth in the first quarter was down 22.7 percent over corresponding period last year.

♦ A Revivalist Leader, which takes a close look at the strategic thoughts of the Supreme Leader, has been unveiled.

The book has been penned by Naim Qassem, the deputy secretary-general of Lebanon’s Hezbollah Movement.