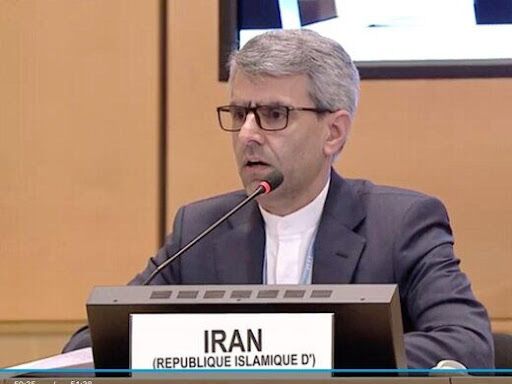 Iran's ambassador and permanent representative to the UN office in Geneva says Tehran condemns violence and any violation of international humanitarian laws in Afghanistan.

Addressing the UN Human Rights Council’s special meeting on Afghanistan on Tuesday night in Geneva, Esmaeil Baghaei Hamaneh said there must be accountability for all crimes committed in the country.

Baghaei Hamaneh added that Afghans are entitled to live in peace and have good relations with neighboring countries without illegal foreign military interventions. The Iranian envoy said, “This will be possible only through an inclusive government made up of all ethnic and religious groups of Afghanistan”.

Baghaei Hamaneh said a peace and reconciliation process led by Afghans themselves should begin for this purpose.

The Iranian diplomat also addressed the root-cause of Afghanistan’s situation, saying what’s happening now is not unrelated to the long US-led occupation of the country.

Baghaei Hamaneh said the US-led occupation is to blame for the destruction of Afghanistan and the unending ordeal and desperation of its people.

He noted that the US cannot dodge responsibility for the ramifications of its disastrous military expedition to Afghanistan.

Baghaei Hamaneh also spoke of Iran’s efforts to alleviate the suffering of the Afghan people. He said the Islamic Republic has close ties with Afghanistan and has hosted millions of Afghan refugees over the past four decades. Iran’s Ambassador to Geneva also urged the international community to meet its responsibility to help vaccinate the Afghan refugees against Covid-19. Baghaei Hamaneh said Iran has done its share to help with Afghanistan’s progress and stability and will do its best to pave the way for peace talks between Afghan factions.

The Geneva meeting is held following the withdrawal of the US and other foreign forces from war-torn Afghanistan.

At the meeting, the High Commissioner for Human Rights urged the Council to craft a mechanism to closely monitor the evolving human rights situation in Afghanistan.

Michelle Bachelet said there are credible reports of serious violations of international humanitarian law and human rights abuses taking place in many areas under Taliban control such as summary executions of civilians, restrictions on the rights of women, including their right to move freely and girls’ right to attend schools, and recruitment of child soldiers.