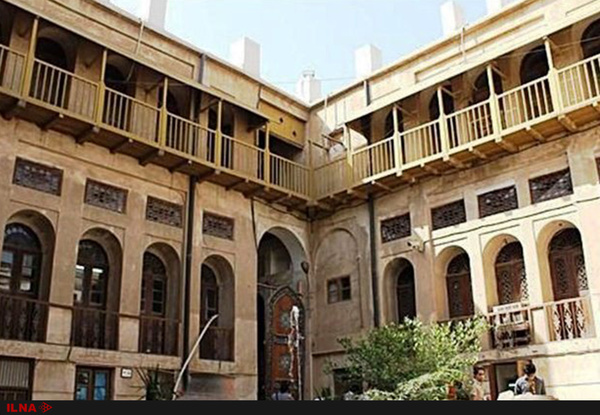 Dehdashti Mansion, also known as the Oil House, is said to be one of the first residential towers of Iran located in the centre of the southern city of Bushehr.

As one of the historical sites of Bushehr dating back to Qajar dynasty, the mansion is among the major tourist attractions of the city. It was built by an oil merchant named Haj Gholam-Hossein Dehdashti in the old neighbourhood of Bushehr.

The mansion enjoys an extraordinary architecture. In an era when most buildings in Bushehr’s old neighbourhood had two stories and a few of them three stories, the mansion was built in four stories. This made it seem more like a tower in the city.

Several trade documents were found in the house, some of which date back to 200 years ago.A number of these documents have stamps from the UK, India, Germany as well as Qajar stamps. The documents have been categorized and held by the Cultural Heritage, Handicrafts and Tourism Organization of Iran.

The main materials used in the structure of the mansion include sandalwood, teak, coral, lime and plaster. The ceiling of the historic building is made of sandalwood. Meanwhile, the ceiling of reception room has oil paintings with European themes. The elegant decorations inside the rooms as well as the complicated systems of doors and windows of the building catch the eyes of every visitor.

The mansion also has several beautiful sash windows with stained glass and knots. It used to be residential and commercial. Today, however, the building is used as the Architecture Museum of Bushehr, where photos, scale models and picture guides about the architecture of the city as well as information about the old neighbourhood of Bushehr, its historical homes and the traditional material used in their construction are put on display.

Below, you can see a series of photos of the mansion retrieved from various sources: