‘Conversations with Kiarostami’ Now on Bookshelves in US

A collection of interviews by famous American film critic Godfrey Cheshire III with late Iranian filmmaker Abbas Kiarostami has been published in the United States in the form of a 188-page book entitled "Conversations with Kiarostami".

The book “Conversations with Kiarostami” was unveiled in an event in New York which began on July 26th and will run through August 15. The event also offers the most comprehensive review of the works of Kiarostami.

The book has been published by Woodville Publishing and the director’s son Ahmad Kiarostami has written the book’s foreword.

Conducted during the 1990s, these in-depth conversations offer a film-by-film account of Kiarostami’s views of his artistic development from his first short “Bread and Alley” in 1970 to the 1999 feature “The Wind Will Carry Us”.

It also looks at his lesser known features and shorts along with the masterworks that made him known around the world, such as the Koker Trilogy – “Where Is the Friend’s House?”, “And Life Goes On”, “Through the Olive Trees”, “Close-Up” and “Taste of Cherry”. 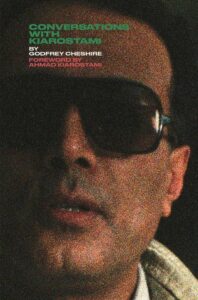 “During Godfrey’s numerous visits to Iran within a decade, he formed a relationship with my father that I had hardly ever seen him having with other writers,” Ahmad Kiarostami writes in the foreword.

“I believe this is because of Godfrey’s ability to go beyond the surface; his unique attitudes and interpretation. It is well-known that Godfrey was one of the first people who introduced the Iranian cinema to the US and, yet, there is no trace of the usual ‘exotic’ approach… That is what you will find in this book: a stimulating conversation which is far from the clichés,” he noted.

Cheshire then explains why he tends to divide Kiarostami’s oeuvre into three periods. The first, the Kanoon (Institute) period, is related to the Institute for the Intellectual Development of Children and Young Adults (IIDCYA) in Tehran, which produced all but a few of Kiarostami’s earliest films. Most of these have rarely been seen in the United States.

The second phase of Kiarostami’s filmmaking career, the Masterpieces period, begins with the 1989 documentary “Homework” and extends through “The Wind Will Carry Us”.

Godfrey Cheshire, born in1951, is an American film critic, film writer and director. He was instrumental in the founding of Raleigh’s Spectator Magazine in 1978. He also served as the chairman of the New York Film Critics Circle.

He was first drawn to Kiarostami’s works in 1992, when Film Comment assigned him to cover a festival of post-revolution Iranian films. It was there and then, he notes in his introduction, that Close-up (1990) “struck me as one of the most extraordinary films I’d ever seen.”

A few years later, Cheshire, having struck up a friendship with the director, began traveling to Iran and recording these conversations in which Kiarostami discusses each and every one of his films.