Anniversary of Islamic Revolution was marked in Iranian embassy in Damascus 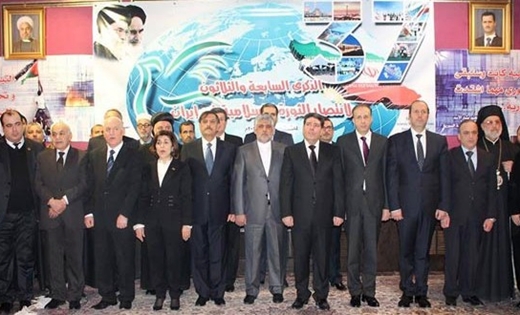 A ceremony was held in Iranian Embassy in Syrian capital Damascus marking 37th anniversary of the Islamic Revolution.

According to Syrian official News Agency (SANA), Syrian Prime Minister speaking on the occasion, said Iran and Syria have historical ties and brotherly and friendly relations between the two nations has grown in various aspects.

wael Nader al Halqi said Iran is a determining power in international arena and a source of stability in the region and stands like a fortress against the plots hatched by the Zionist regime and the United States in the region.

He added that Iran is the real friend of Syrian nation and has not abandoned Syrians during their dark days.

Syrian Prime Minister went on saying that Iran and Syria together make up the real axis of resistance against terrorism and all complicated machinations targeting in the region.

Syrian Speaker of Parliament, Minister of Defense, Electricity and Petroleum, Natural Resources, Economy and Trade, Health and several other high ranking political cultural, media and religious figures also attended the ceremony held on the anniversary of Islamic Revolution in Iranian Embassy in Damascus.