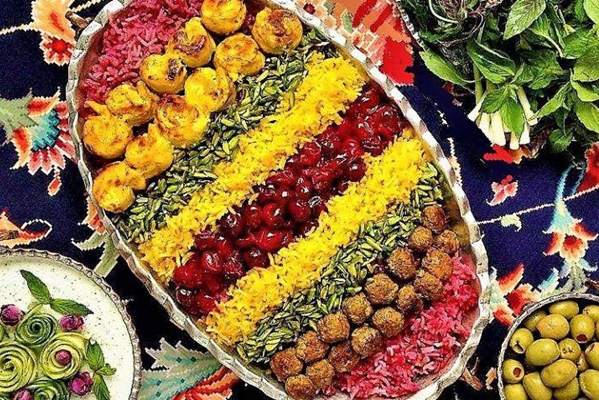 Albaloo Polo (pilau with sour cherries) is not only one of the most famous foods in Shiraz in southern Iran, but is also a popular dish commonly served in formal parties.

Sour cherries hit the market in summer, making it an ideal season for Iranian families to cook and eat Albaloo Polo. The food can be mixed with tiny meatballs or chicken.

Shredded pistachio: half a cupful

Shredded almond: half a cupful

In order to make sour cherry jam, pour sugar onto sour cherries and put the mixture in the fridge for one day to become watery.

The ingredients are as follows:

Salt: As much as needed

Using your hand, mix the meat, grated onion, black pepper, turmeric and salt well. Take some meat the size of a walnut and form it into a ball with your hands. Then pour a few spoonfuls of oil into a dish and put it on the oven. Put the meat balls into the oil, adjust the heat to medium temperature and leave the meat balls to be fried well. Now your tiny meat balls are ready.

Rinse and drain the rice. Then pour some oil into a casserole and put it on mild heat until the oil gets hot. Afterwards, put three fish slices of rice into the dish. Then pour two spoonfuls of sour cherries in the middle of the rice. Only add the sour cherries, and NOT the syrup.

Then add a spoonful of saffron. Put some of the sour cherries away to decorate the food. After you have added all the ingredients, put the rice on medium-to-high temperature. Wait for 5 minutes till the casserole becomes hot. Then add two spoonfuls of oil as well as half a glass of water and leave the casserole on heat for another 6 or 7 minutes until steam begins rising from the rice. Leave the rice to be cooked through.