A look at Iranian newspaper front pages on Jan 14

Iran’s Islamic Revolution Guards Corps seized two US boats in Persian Gulf waters and detained 10 American marines but freed them after they apologized for trespassing Iranian territories. This story preoccupied almost all the Iranian press on Thursday. The Supreme Leader’s meeting with the organizers of a conference held in Iran to review Islam’s view on art and artistic activities also grabbed a number of headlines in the press.

Iran expects the final IAEA nuclear report on Tehran’s nuclear activities on Friday and this has soared optimism in the country’s stock market, has diminished foreign exchange rate and boosted the stocks. All the newspapers allocated at least a headline to these developments.

Following are the highlights of the dailies on Thursday, January 14, 2016.

1. Russian premier: We shall prepare for the world economic scenario

2. Iran among world’s 4 most welcoming countries for foreign refuge seekers 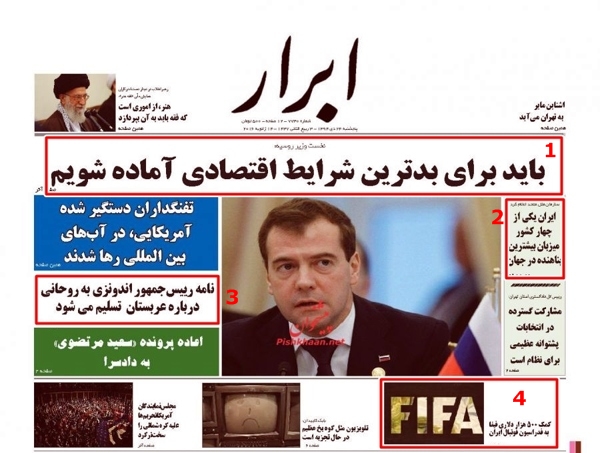 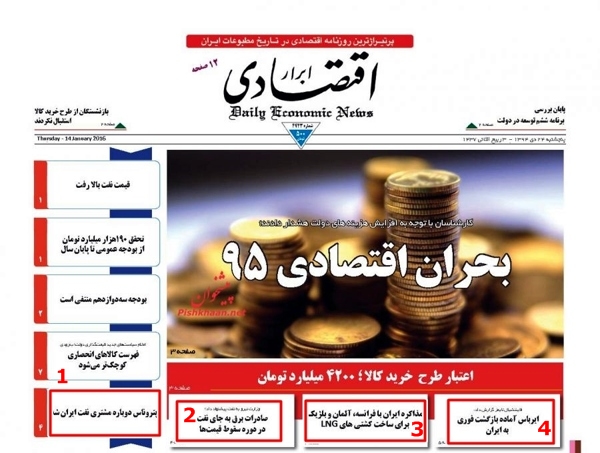 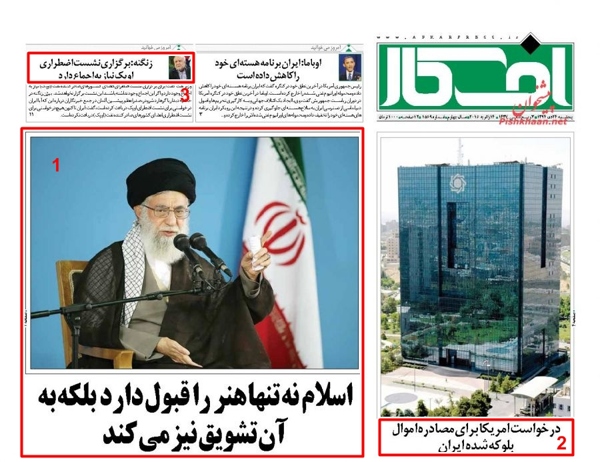 1. US thanks Iran [for swiftly freeing American marines] 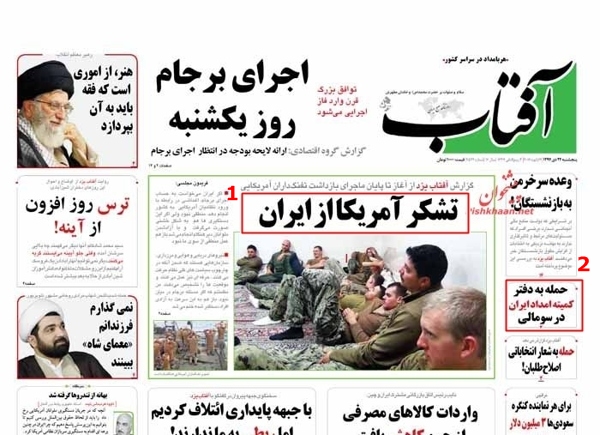 1. Wave of optimism in Iran market 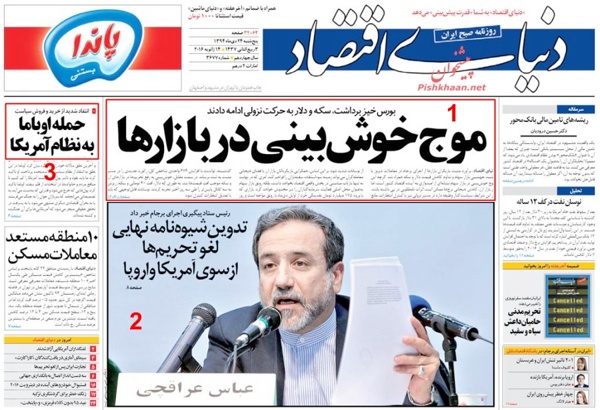 A report by Ebtekar about seizing and freeing US marines in Persian Gulf waters. 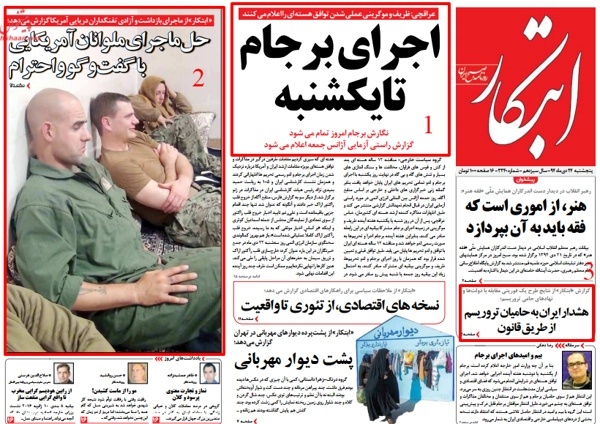 The ten US marines who had trespassed on Iran’s territorial waters and had been taken into Iranian custody by the Islamic Revolution Guards Corps forces, were released after less than a day.

4. Health Minister: People must be informed about the realities of AIDS 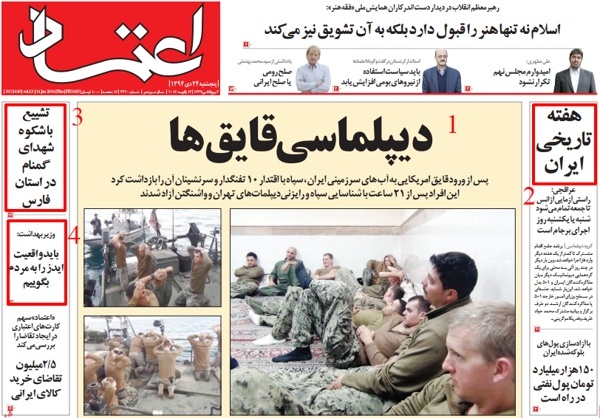 Iran’s Supreme Leader Ayatollah Seyyed Ali Khamenei told a meeting of the organizers of the Fiqh of Art congress that not only does Islam endorse art, it also encourages it.

3. Obama calls on US congress to authorize use of military force against ISIS

A ceremony was held in the southern province of Fars to bury the remains of 94 martyrs of the Iraq-imposed war on Iran (1980-88).

5. US thanks Iran for swift release of 10 Navy sailors 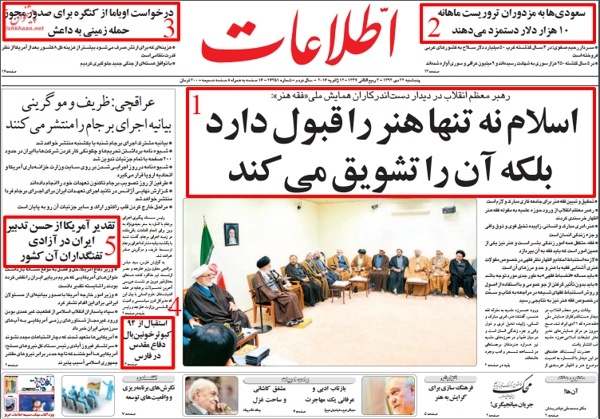 – US joins Saudi coalition to use Yemen as arms laboratory 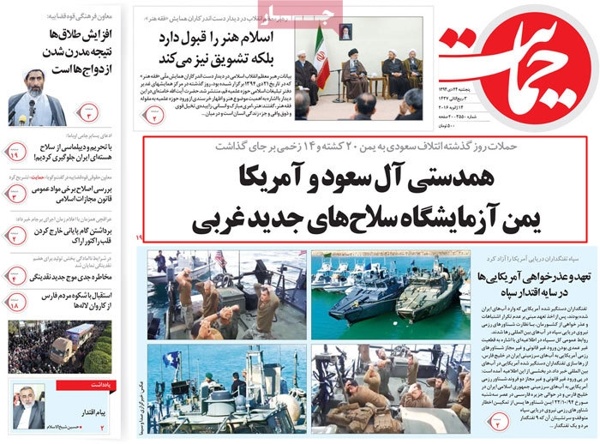 2. Iran’s seizure of 10 US navy sailors from beginning to end

From nightly telephone conversations of Iran’s Foreign Minister Zarif with his US counterpart to the wise decision making of Iranian military commanders. 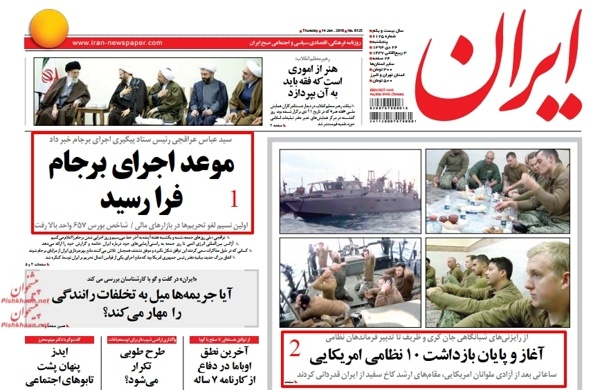 A report on the bitter days of sanctions for supplying medicine for the sufferers of special diseases in Iran. 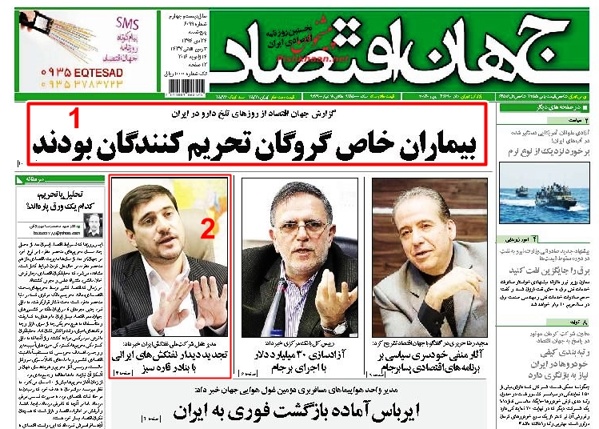 1. Speculations about imports of US goods

2. Obama defends his legacy in SOTU

US President Barack Obama vigorously defends his legacy in his final State of the Union address.

3. Islamic treatment towards US marines 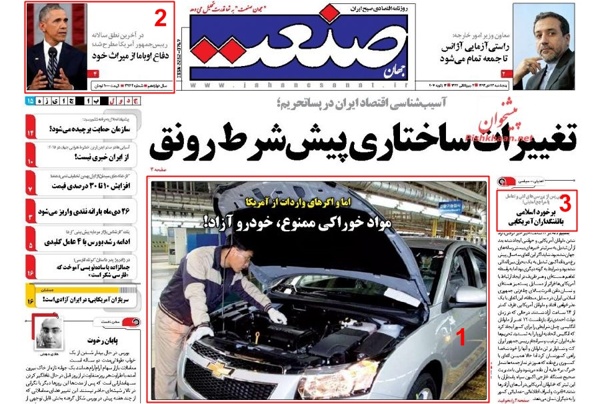 US marines freed by Iran

The organizers of the National Conference on Fiqh of Art visited the Supreme Leader of the Islamic Revolution, Ayatollah Seyyed Ali Khamenei. 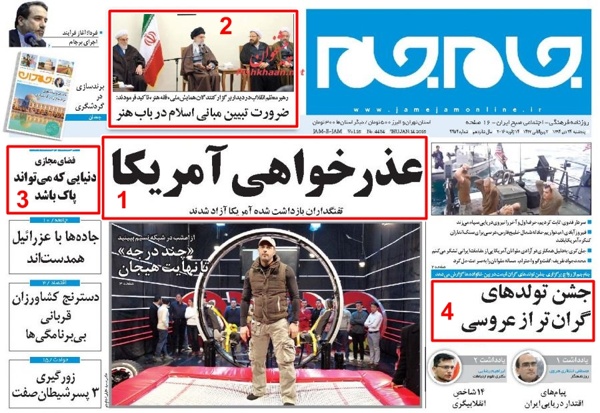 1. US wealth in the hands of a few: Obama in a rare confession in SOTU 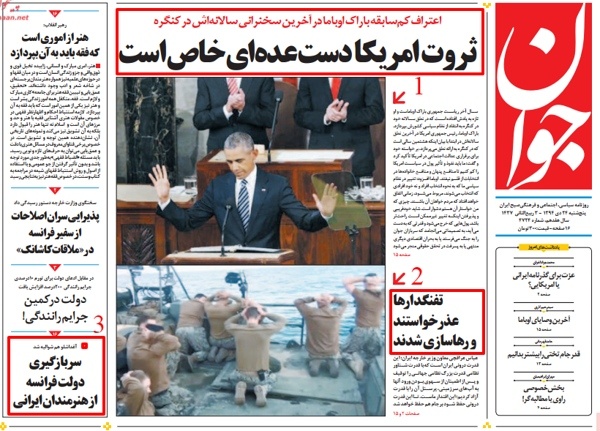 1. No sanctions next week 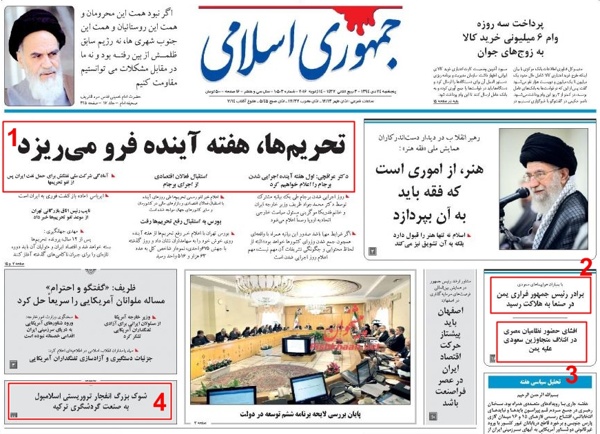 1. US tests, IRGC browbeats [US army in Persian Gulf]

US marines freed after apologizing

3. Yemen used as laboratory to test US arms: world media 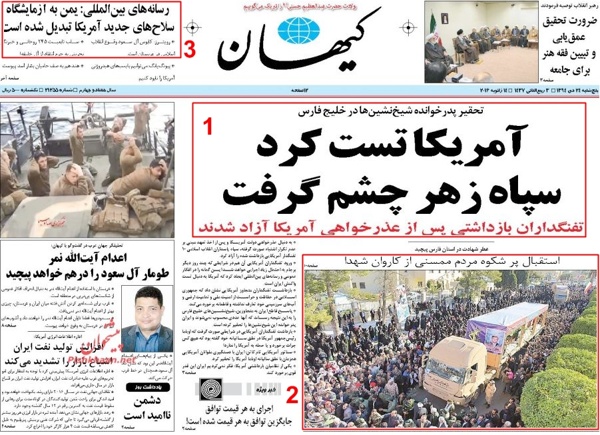 Iran has prepared 160,000 houses in the Maskan-e Mehr housing initiative and will offer them to their owners during a 10-day period which marks the anniversary of the victory of the 1979 Islamic Revolution in February. 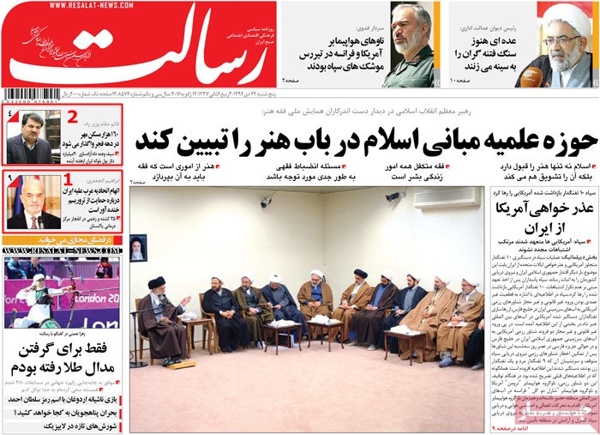 Only a few days to implementation of the nuclear deal and the long-sought sanctions relief on Iran’s nuclear program, Iran’s stock market prepares to recover from recession while foreign exchange rate drops.

Iran says it has started the proceedings for the much-awaited unfreezing of a total of around $30 billion as envisaged by a nuclear deal it struck with the P5+1 group of countries last July. 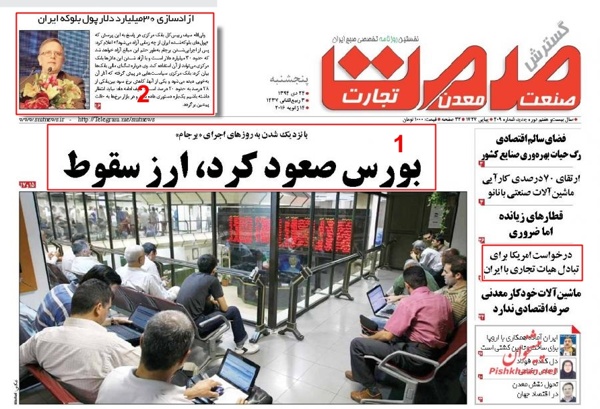 A report on how business owners carry out their social responsibilities in Iran. 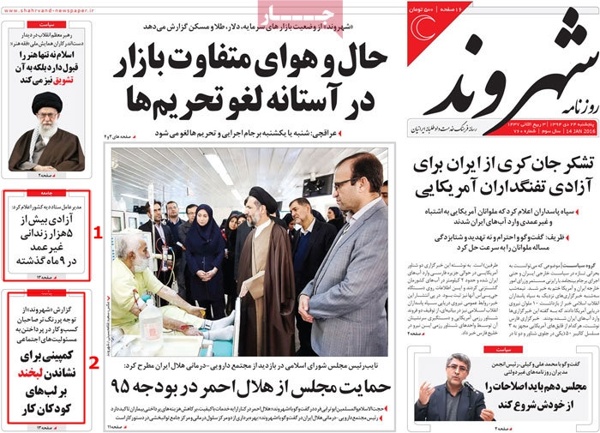 1. The melody of sanctions relief

A report by Ta’adol on the effects of sanctions relief on Iran’s economy.

Iran’s stock market is soaring a few days prior to the sanctions removal. 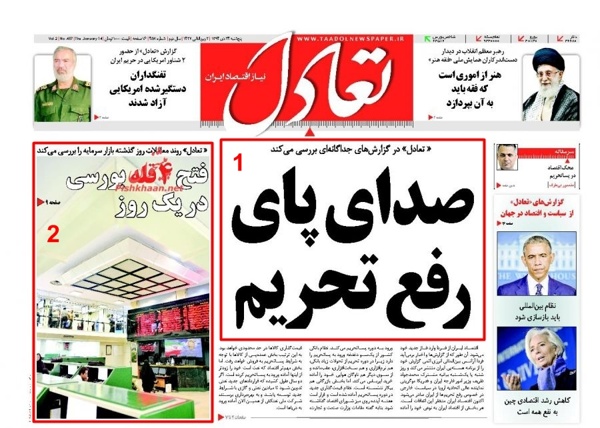