A look at Iranian newspaper front pages on April 11

1- Supreme Leader: Operational capability and spiritual motivations of the Armed Forces should be strengthened day by day. 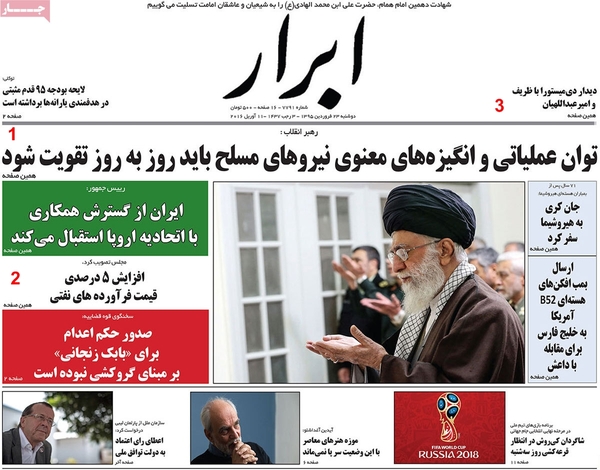 4-    Europeans talk with US Treasury about Iran 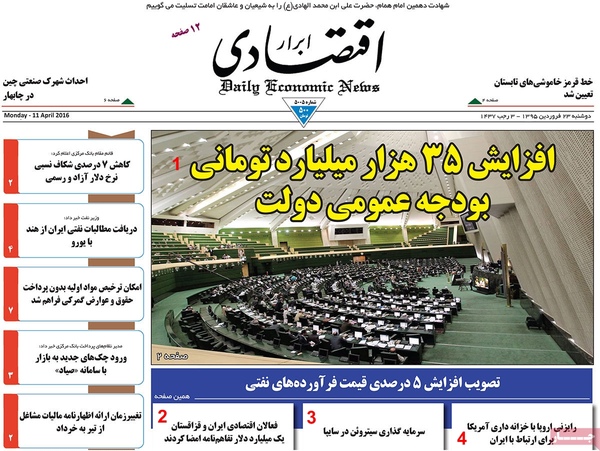 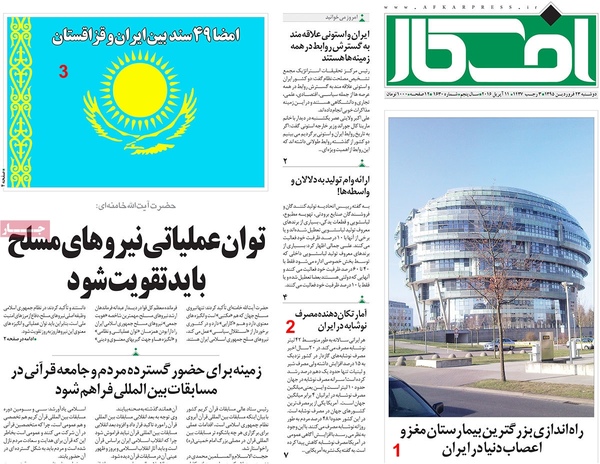 1-    Spokesman for Headquarters for Combating Drug Trafficking:  Iran is number one in the world in narcotic confiscation 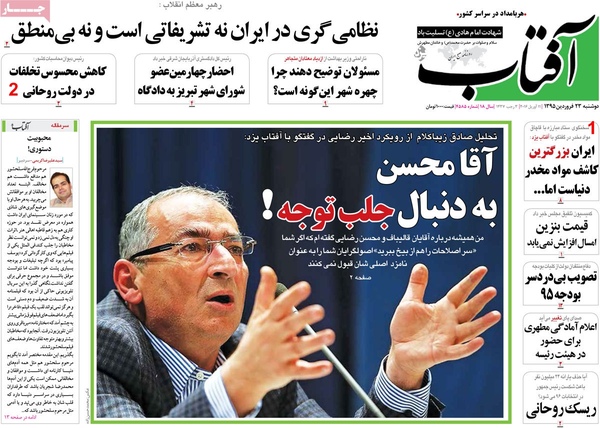 2-    Supreme Leader: Militarism in Iran is neither formality nor illogical

4-    Minister of Culture: We tried our best to encourage those working in Iranian film 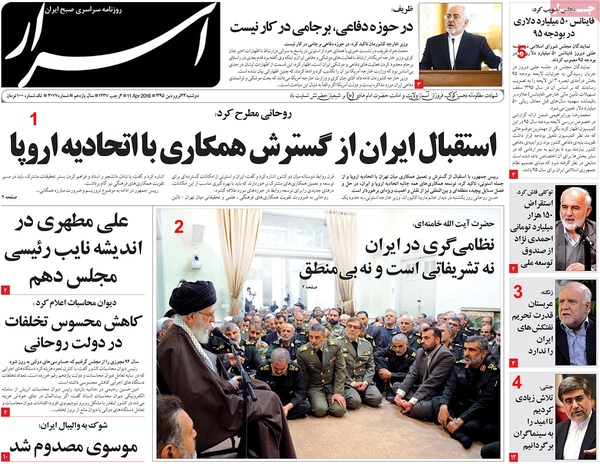 3-    Sanders on track for victory 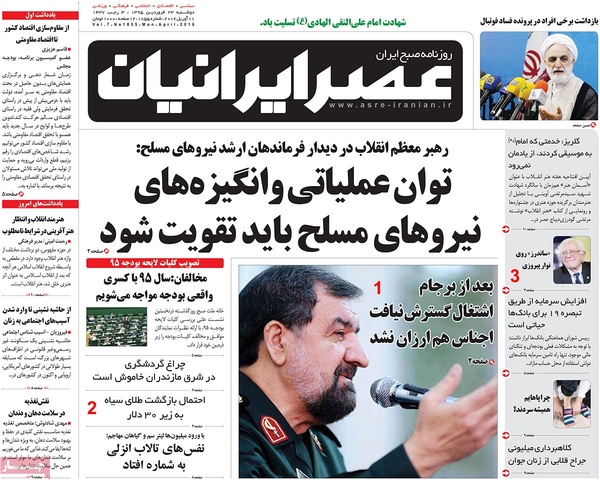 3-    Iran and Germany to boost their agricultural cooperation 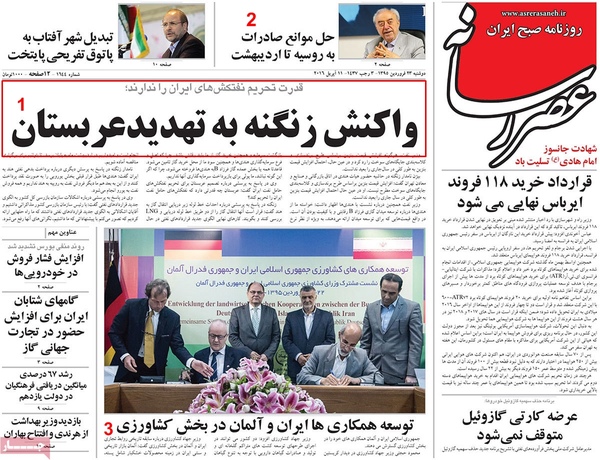 2-    Zarif sharply criticizes Kerry: There is no Joint Comprehensive Plan of Action (JCPOA) on defence sector

The Iranian Foreign Minister described John Kerry’s statements on Iranian missile tests as baseless, and said there won’t be a JCPOA on defence. Zarif said the invasion and occupation of Iraq by the US is the main cause of the rise and expansion of terrorism in the world 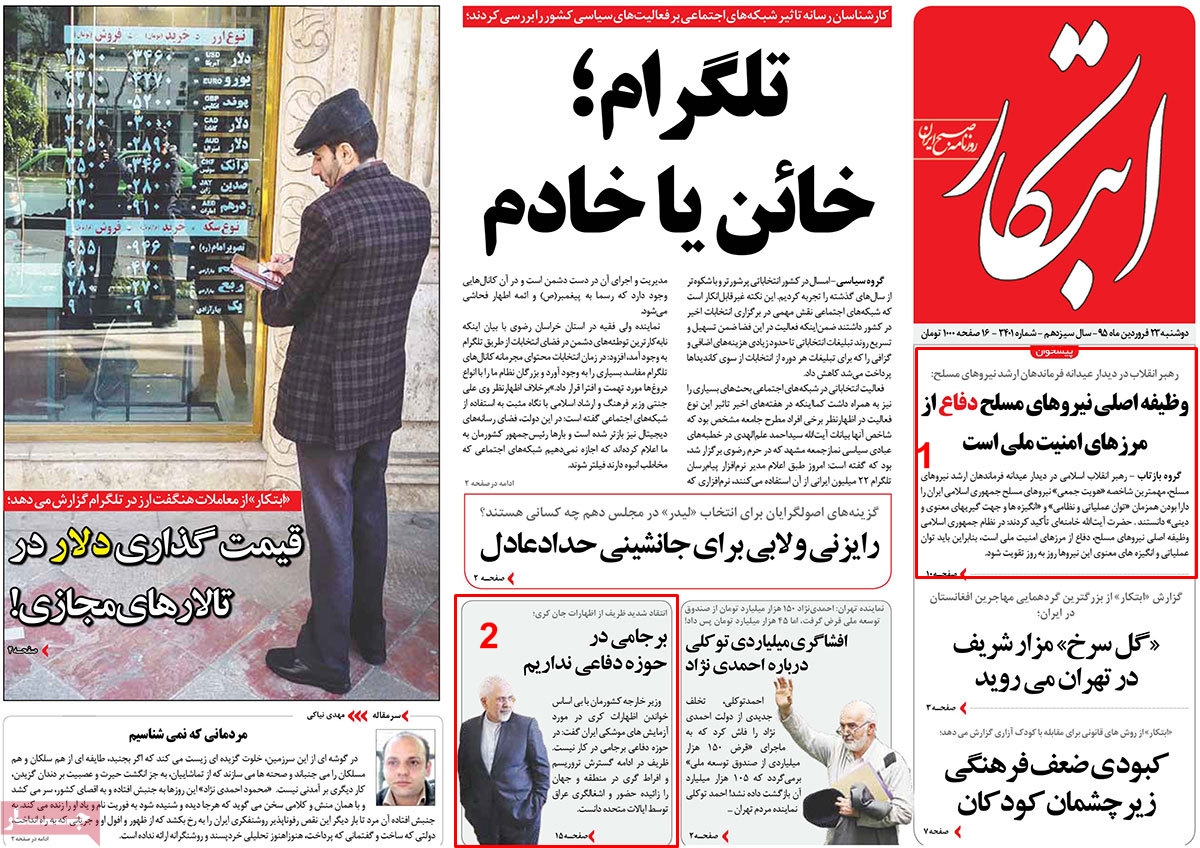 1-    Minister of Culture and Islamic Guidance defends his ministry’s performance during his 2.5 year term of office

2-    Minister of Health: Insurance coverage for addicts to become a reality soon 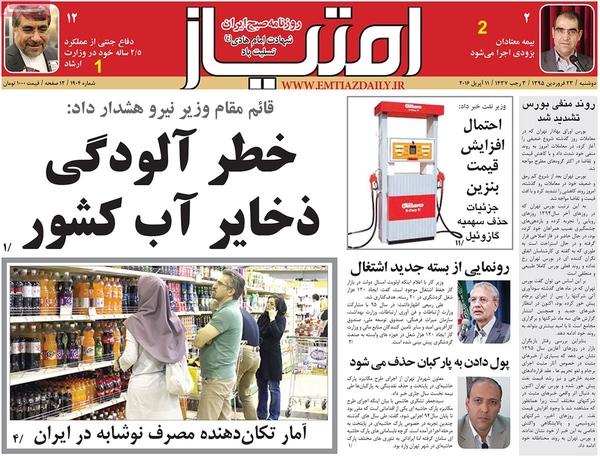 1- Zarif reacts strongly to Kerry’s proposed negotiation: We are not going to have missile JCPOA 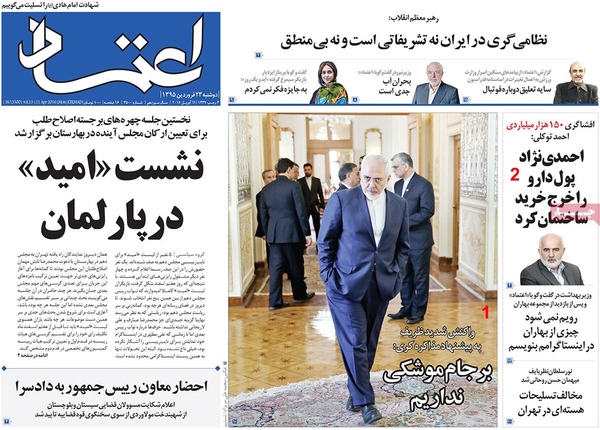 1- Supreme Leader: Armed forces should be the safe haven for people

3-President Rouhani in talks with Estonian Foreign Minister: Iran and Europe should work for stability and security in the Middle East

4- British Army: US has supplied thousands of tons of military hardware to terrorists in Syria 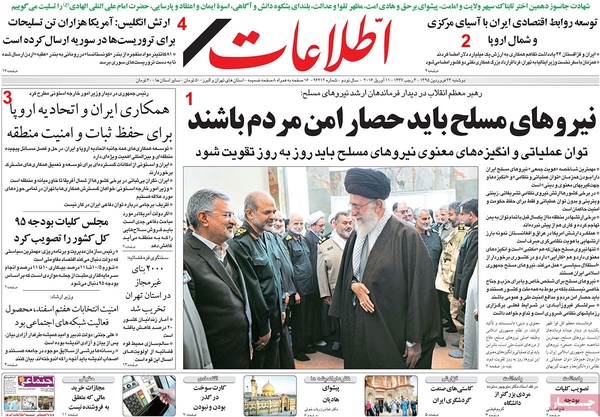 1- In Mighan marshland, workers are frightening cranes away 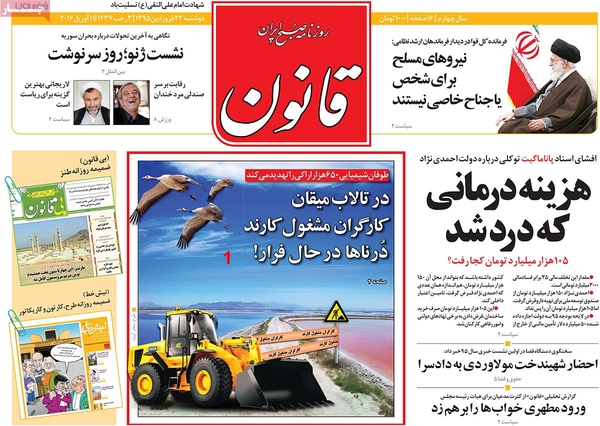 1- Zarif responds to Kerry’s tough talk: US Secretary of State knows that our missiles and defense capability are non-negotiable 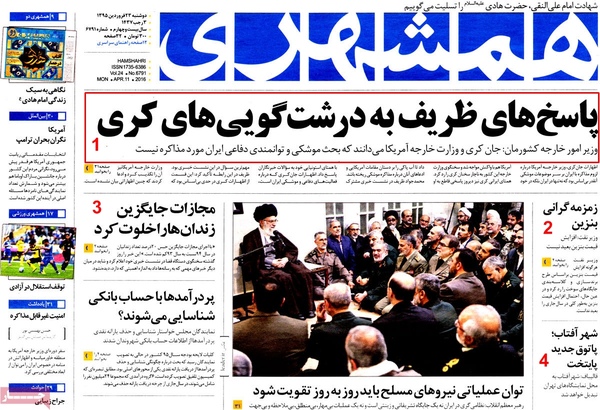 3-    Supreme Leader: Armed Forces do not belong to any particular individual or faction

4-    Minister of Culture: Government advocates freedom of speech and beyond 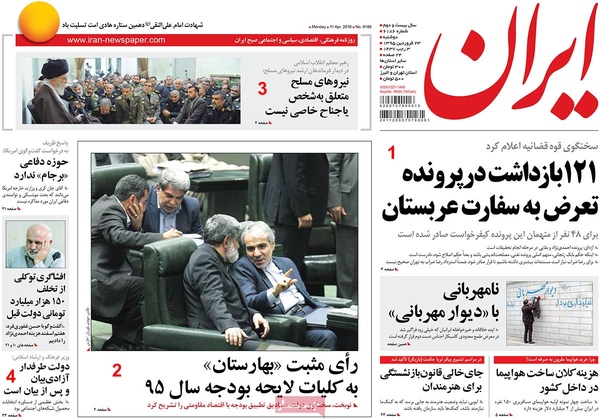 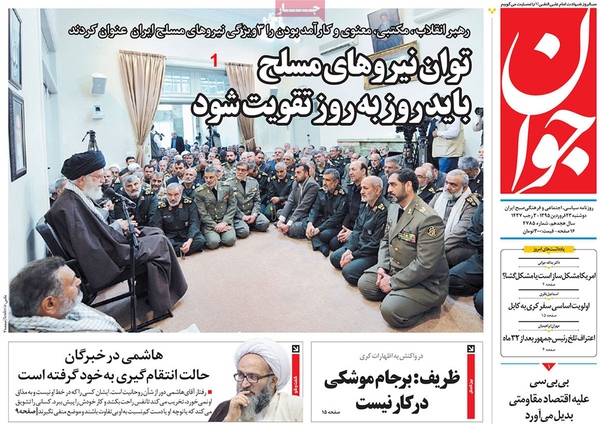 Kerry’s claim about Iranian support for terrorism is baseless, and no one in the world pays any attention to such claims. If the US is serious about defence issues it should first stop supplying weapons which are used for killing Yemeni people.

3- Iraqi Police confirms supply of weapon by US to ISIS

4- Terrorists in Syria use chemical weapons against Kurds 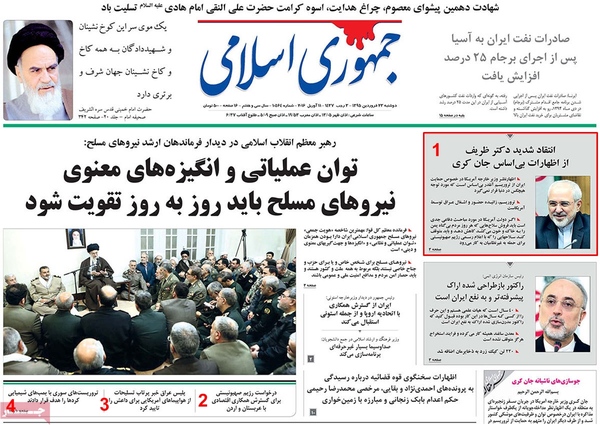 1- Democracy is sacrificed in US Presidential election: votes by leaders of Democrat Party overrules popular vote 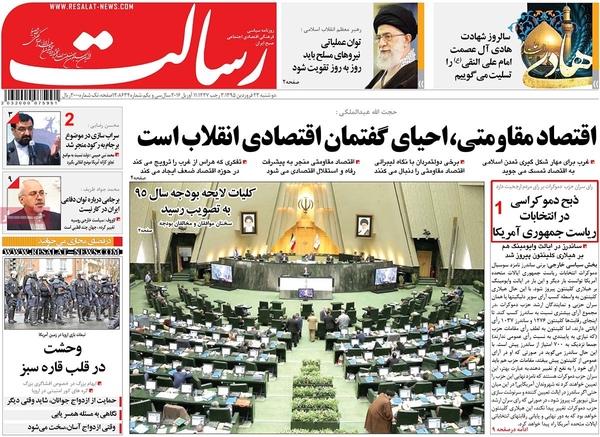 1- Foreign Minister: Americans have accepted that missile activities are separate from JCPOA 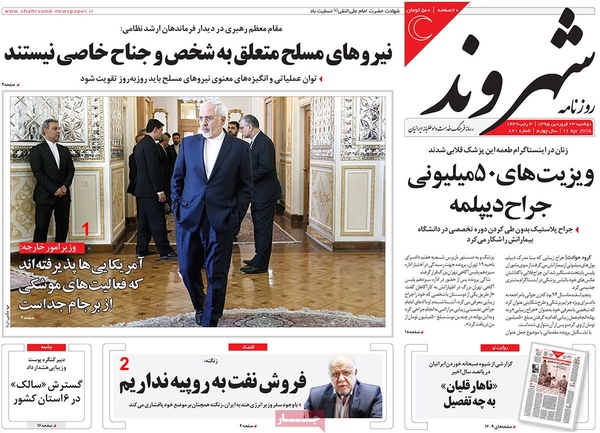