Yoghurt stew is a traditional Iranian meal commonly cooked in the central Iranian province of Isfahan.

It is called a “stew,” but, in fact, is served as a dessert and an hors d’oeuvre. The yoghurt stew tastes sweet and is very delicious.

Sugar: half a cupful

Salt, turmeric, pepper: as much as needed 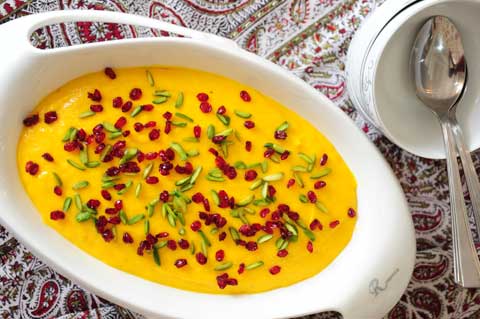 Mix the yolk with sugar and yoghurt. Put the mixture in a medium-sized casserole. Put it on medium-temperature fire until the yoghurt begins to boil. Now add the mashed meat and mix the whole thing.

After a while, add salt, walnut, minced almond, saffron and rose water. After a few minutes remove the casserole from the oven and put the stew in a dish. You had better put it in the fridge for 24 hours until it cools down. This stew is served cold.