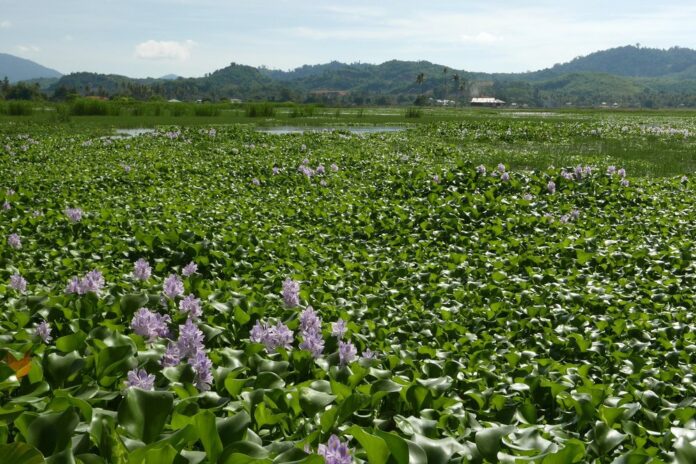 The conditions of Iranian wetlands are suitable for the growth of water hyacinth, an invasive species which puts the environment at serious risk.

According to a Farsi report by Mehr, Iranian freshwater resources, including the ones in Guilan province, northern Iran, are increasingly exposed to the harms of water hyacinth, an invasive species which is considered to be a “bioterrorist” because of serious damages it causes to the environment.

Multiplying twice in less than a week, the water hyacinth is considered a serious natural risk to Iranian environment, having the ability to invade all freshwater resources of the country, and thus, destroying its agriculture and sustainable security in less than 50 years.

In Iran, the subject was first raised in Rostaniha, an ISI journal, by Ali Yaqoubi, a professor in University of Guilan, who published a report on the growth of water hyacinth around Eynak urban wetland, Rasht, in 2011. By the time, one hectare of the wetland was invaded by water hyacinth. The affected area was extended up to 600ha only after 4 years.

“As announced by Iraqi Minister of Environment, 110ha of Tigris River’s surface is invaded by this plant. As the Mesopotamian marshes in south-western Iran are adjacent to Tigris, they are at a high risk of being affected.  As there are favourable conditions for water hyacinths reproduction in southern Iran, measures must be taken to cope with the situation as soon as possible.”

The authorities of Khuzestan province in southern Iran invited Guilan province administrators to learn from their experiences in water hyacinth control by studying the spread of this plant in Khuzestan’s freshwater resources to adopt effective coping strategies. The International Union for Conservation of Nature and Natural Resources (IUCN) has identified the water hyacinth as one of 10 important invasive weeds, and the Society of Water Weeds considers it the most important aquatic weed.

Despite being known as a serious natural danger in affected countries, many people and authorities aren’t aware of water hyacinth harms, and it is still used as a decorative plant in many houses.