Walls in Iraq Are No More Dark 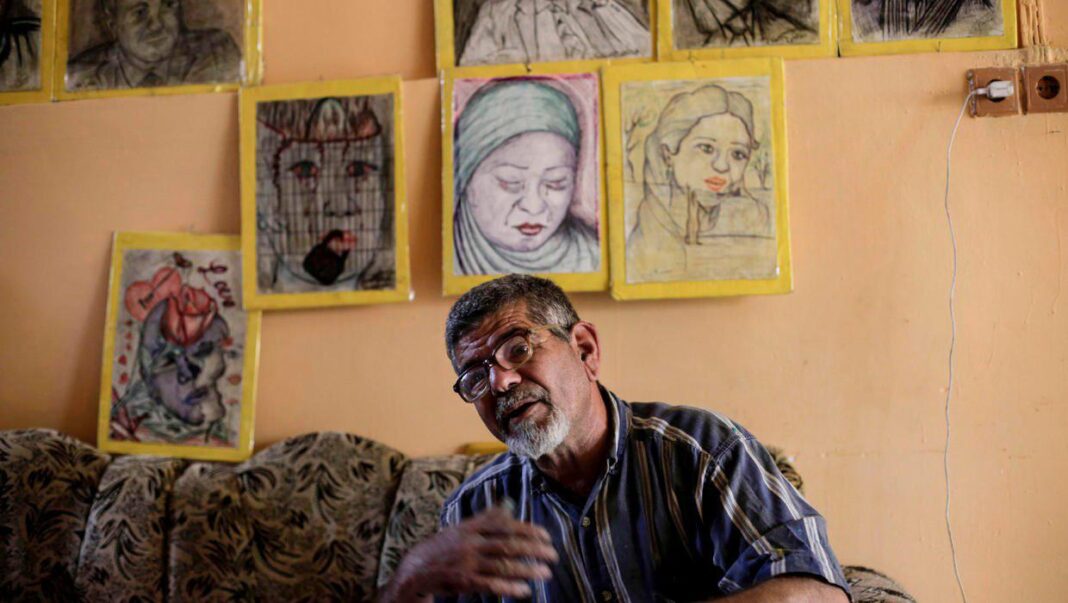 An Iraqi artist says his profession was regarded as a crime during the ISIS rule, when the terrorist group’s black flag was seen on all the walls, but the dark walls are now gone.

The Vaghaye Ettefaghieh daily newspaper has, in a Farsi article, shed light on the life of an Iraqi painter who speaks of the dark days of the ISIS rule and the bright days which ensued. Here is the full text of the piece:

Everyone in the Iraqi town of Hamam al-Alil knows Mostafa Taee.

“Aha, you’re looking for Mostafa, the painter! Go toward the market and follow the block of painted houses. There, you’ll see Mostafa drawing.” 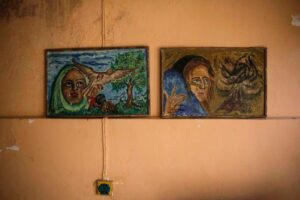 Mostafa’s murals are a combination of palm trees, vivid colours, the hoisted Iraqi flag, different mosques and Iraq’s ancient symbols. They show the Iraqi history and culture which took shape between the Tigris and Euphrates rivers.

“When ISIS militants got to know I was a painter, they beat me with sticks and batons.”

With thick glasses on his face, Mostafa can now smile to his heart’s content. He is now free to paint wherever he wants. People in town like his paintings. His colours take the gloom and grief of the ISIS era off the town’s face. Folks warmly welcome him everywhere as they like the painter in their town.

Hamam al-Alil is located 20 kilometres south of Mosul on the west bank of the Tigris River. The town is known for its warm-water public baths, and is named after these very baths. Mostafa grew up in this town and began work as an engineer, but later quit his job and took up painting, his favourite subject.

“He can do everything,” says Hamid Yasin, Mostafa’s cousin.

“People come to him to have their ovens or heaters fixed. Mostafa not only fixes their stuff, but draws their pictures as well,” Hamid notes.

“Taee is famous for his paintings more than anything else.”

The 53-year-old painter says he is in love with painting.

“Painting has been my love for the past 20 years. I can’t imagine a day without it. I like to paint everywhere. I hate walls with no colours or designs. They are hollow and give you no feelings. It’s the designs and colours that make the town beautiful,” says Mosafa. 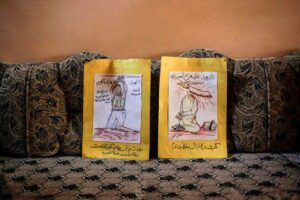 In mid-2014, Taee had to give up his artistic activities. That summer, ISIS militants had crossed the Syria desert and captured large parts of Nineveh, including Mosul. They had banned almost everything, from cigarettes to mobile phones. It was also forbidden to draw portraits. But Mostafa painted in secret. He is addicted to painting.

No one was interested to cooperate with ISIS. During the days when they were in power, executions and punishment by lashing in public were the order of the day. Taee’s painting was regarded as a crime. In those days, he had stopped painting typical scenes and begun to illustrate the horrific scenes he saw: decapitations, executions, wounded children and weeping widows. He drew them all in dull drab colours. He was tortured behind bars for weeks. He was lucky to have escaped execution due to his knowledge of engineering and ability to fix broken stuff.

With Hamam al-Alil now being liberated from ISIS, Mostafa, who has seen soldiers making sacrifices to free the town, has new things to paint now.

“They gave their lives on the path to freedom. I have seen many sacrifices by them. I remember how some of them were brutally killed. But I paint them in combat gear, with dignity and pride, to keep their memory alive. No one in the government has asked me to do this. I never charge anyone for what I’m doing. It’s a responsibility I feel is on me. I’m happy to see my love for painting is intertwined with a holy cause,” says Mostafa.

“One day, I was drawing on a wall. A man came to me and gave me a picture. He said it was the photo of his son Amin Sa’d, who was only 31 when he was martyred. He asked me to paint his son for him. I asked his address. As of the following day, the wall of his house was my canvas. His son had been a police officer. He’d been killed in a roadside bombing. I drew him in his blue uniform. His father is now my intimate friend. After that event, I received hundreds of photos and walls. I have promised to draw them one by one. I’ll keep painting on walls of the town as long as my hand is powerful enough to do so, so that everyone will come to realize that many youths gave their lives to secure this freedom,” he said.

Now, police in the town have allocated special facilities to him. No one bothers him, all walls in the town belong to him and all doors are open to him. People proudly hang his paintings on their walls while waiting for the murals on the walls of their houses to be finished. Taee has, so far, painted around a hundred murals depicting martyrs.

“The war is over, but struggle continues. We shouldn’t let those bitter days return. Walls shouldn’t turn into ISIS’ black flags. The streets shouldn’t get red with our people’s blood. Walls in the city should be full of colours. Our children should see the heroes of this land and get to know them, so that they won’t give in to humiliation in the future.”