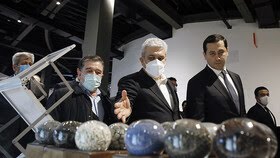 Sardar Omar Zaghev, Deputy Prime Minister and Minister of Investment and Foreign Trade of Uzbekistan, along with several other Uzbek ministers and deputy ministers, have visited the exhibition of Iranian export-and knowledge-based products, known as the i-Hit in Tehran.

The Uzbek officials were hosted by Sorena Sattari, Iran’s Vice President for Science and Technology. During the visit, Sattari told the Uzbek delegation that innovative and creative economy is a top priority for Iran, adding,”Now, one of the prongs of interaction with neighboring countries and presence in the international arena is the products, services and technologies offered by knowledge-based companies.”
Sattari also said currently, there are more than 10,000 startups in Iran, which are among the top ones in the fields of ICT, biotechnology, laboratory equipment, nanotechnology and aerospace, and have placed Iran’s technology and innovation ecosystem at the top of the best.
Sattari further maintained that more than 98% of the country’s needs are produced inside Iran with the help of knowledge-based companies.
Then, Sattari’s deputy outlined issues related to joint projects that Iran could have with Uzbekistan in the transportation industry.
He said the projects include production of a prototype of an 8-person helicopter, a 72-seater aircraft with a jet engine, land and water aircraft, airport equipment, cars, motorcycles and electric buses.
The deputy prime minister of Uzbekistan praised Iran’s technological achievements and said, “We are confident that Iran has made significant achievements in the field of science and technology.”
Zaghev invited Sattari to visit Uzbekistan and attend the Tashkent Investment Conference.