US Should Publicly Apologize for Killing Syrian Troops: Assad’s Advisor 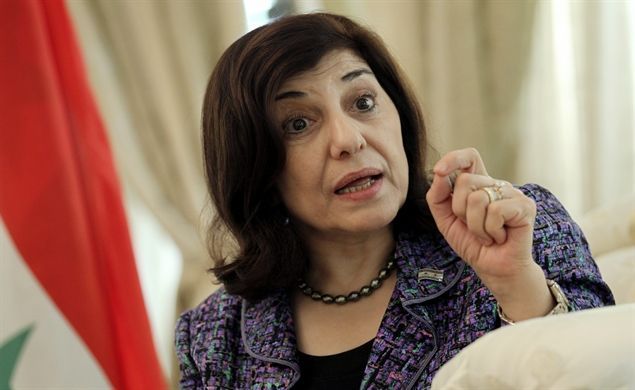 Bouthaina Shaaban, the Political and Media Adviser to Syrian President Bashar Assad, says the Syrian army will strike wherever there is terrorism in the nation, and the government is resolved to restore sovereignty over the whole national soil and to respond to anyone who targets it in order to preserve Syria’s future and unity.

In an interview with Al Mayadeen TV on Monday, Shaaban clarified that the weakness and disarray of the US Administration’s positions, along with its moral degradation even in dealing with the agreements it signs, have reflected on implementing the Russian-US deal on Syria, as the Pentagon did not listen to Obama regarding the agreement, and it was undermined inside the Congress.

She pointed out that the recent Russian-US agreement on Syria cannot be implemented unless the problem inside US Administration is solved, noting that Russia is in the right because it is committed to agreements and it works against terrorism, while the US discourse contains a great deal of nonsense and inexactitude, adding that the provisions that were agreed on in the Russian-US agreement were not made public; rather what has been announced was just partial matters and not the five documents.

She stressed that the Syrian leadership was a main party in the consultations regarding each point in the agreement even before it was written down, adding that the Russian ally differs from the West in terms of respecting the sovereignty of states and allies, stressing that Russia does not agree to any detail regarding Syria before getting the consent of the Syrian leadership.

Shaaban noted that the West doesn’t feel embarrassed if it signs an agreement and doesn’t abide by it, and it’s attempting to do so with Russia as it did before regarding the nuclear agreement with Iran.

On what has been circulated via media outlets regarding a US apology for the aggression on a Syrian Army position in Deir Ezzor, Shaaban clarified that the US apology came through informal channels, adding that Syria does not trust that apology; rather it wants a public apology that ensures that the incident is never repeated.

The Presidential Advisor stressed that Syria is a member state at the UN and the Syrian Arab Army is fighting terrorism, and the legitimacy of President Bashar al-Assad stems from the Syrian people, not from what the American administration decides.

On the relation with the Democratic Union Party, she said “we don’t differ with any component of the Syrian people on any ethnic, religious, or sectarian basis; rather we differ on political basis,” asserting that the Party represents only a small part of the Kurds, and that Syria has supported all sides which fight terrorism and deals with them according to their stances towards the Syrian sovereignty.

Shaaban accused the so-called “opposition” of rejecting dialogue with the Syrian government because its members are tied to foreign agendas, noting that on the other hand, agreements were reached with armed groups more than once because these groups “have more independence than those who were entrusted with holding dialogue in Geneva.”

She dismissed the existence of any guarantees or coordination among Russia, Iran, and Turkey regarding the blatant Turkish aggression on Syrian territory, asserting that Syria didn’t disregard this aggression and it doesn’t believe in the Turkish allegations of fighting terrorism at the time when it send terrorists to destroy it, SANA reported, as covered by ABNA.

She criticized the UN for failing to fulfil its role as a neutral international institution, noting that some UN workers attempted to dissuade some citizens from getting out of al-Waer neighbourhood in Homs and from Daraya in Damascus countryside, and by doing so they overstepped their boundaries, adding that UN Special Envoy to Syria Staffan de Mistura isn’t carrying out his duties with transparency, and that UN Secretary General Ban Ki-Moon’s recent accusations which he levelled at Syria are groundless.

She indicated that some of the Arab parties which have been secretly supporting Israel since the 1930s are supporting it publically today, adding that Israel has normalized its relations with the Arab Gulf states and it works on changing the curriculum in Sudan, Egypt, and Yemen to make it refer to it as an “Israeli state” instead of an entity occupying Palestine.

The Presidential Advisor went on to note that what has been announced by head of the government of the Zionist entity Benjamin Netanyahu is conclusive evidence that Israel is the biggest beneficiary of the so-called “Arab Spring” and that Israel seeks to drive the Arabs apart.

Shaaban added that Saudi Arabia and Qatar are supporting and financing terrorists in Syria and sending terrorists through Turkey, and they continue to pursue this track without any change regarding their relations with the terrorist organizations in Syria.

She considered that assassinating the Jordanian writer Nahed Hatar is a part of the attempts to silence voices that is taking place in the region, addressing the killers by saying “where is the freedom, democracy, and human rights if we are not able to disagree?”