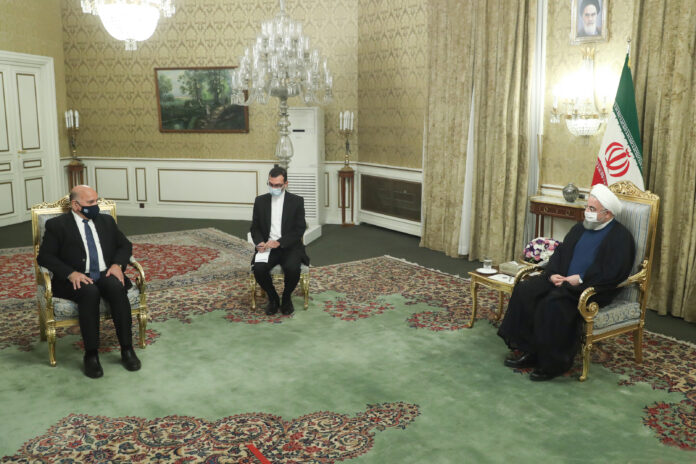 President of the Islamic Republic of Iran has deplored the detrimental effects of the US military presence on Iraq and other countries, calling on all regional states to pursue the expulsion of American forces from the region.

In a meeting with Iraq’s visiting foreign minister in Tehran on Saturday, President Hassan Rouhani said Iran has already made it clear that the presence of American military forces in Iraq, Afghanistan, or the Persian Gulf southern states is to the detriment of regional security and stability.

The push for the expulsion of American forces from the region is a collective duty of all countries to which the US has deployed troops, the president added.

President Rouhani also hailed the Iraqi Parliament’s “positive step” to ratify a bill on the expulsion of American military forces, saying the decision is respected by the Iraqi nation and supported by Iran.

Highlighting Iran’s support for the Iraqi people and government at various junctures, the president said the best example of such assistance came in the fight against the ISIS terrorist attacks on Iraq.

He further emphasized the necessity for unity among the Iraqi groups, adding, “We stand by the Iraqi government and people to help its unity and solidarity.”

Iran has never sought to interfere in Iraq’s internal affairs and the relations among the Iraqi parties, President Rouhani underlined, noting, “We have always maintained that the Iraqi groups should have good relations for the protection and development of their country.”

Stressing the need to broaden the political, economic and cultural ties between Tehran and Baghdad and carry out the previous bilateral agreements, the Iranian president said, “We, as the officials of the two countries, are duty bound to strengthen the pillars of promotion of relations in future.”

The president finally expressed hope that the top Iraqi diplomat’s visit to Iran would help implement the deals between the two Muslim neighbors.

For his part, Foreign Minister of Iraq Fuad Hussein expressed gratitude to Iran for assisting his country in all circumstances.

Hussein said he has visited Tehran with the purpose of boosting the bilateral relations, paving the way for the implementation of the cooperation agreements on border issues and transportation, and making arrangements to use the Arvand Rud for the enhancement of trade exchanges and business.

The foreign minister also said Iraq has set up a special committee of experts to hold negotiations with Iran and prepare the ground for the implementation of the bilateral deals, noting that members of the committee will travel to Iran in the coming weeks.

He also called for the expansion of political, economic and cultural cooperation between Iraq and Iran.