US and Pakistan hold the key to Afghan peace: Former president 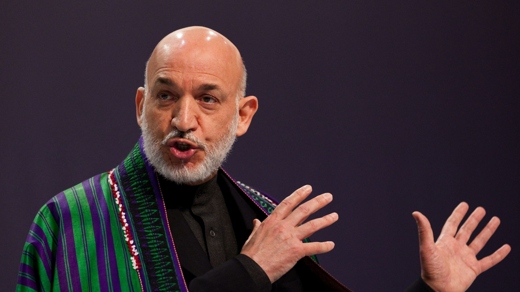 Etemad daily has conducted an interview with former Afghan President Hamid Karzai about his years in office and the government that has replaced his.

After 13 years in power, Hamid Karzai left the presidential office in 2014. A man who took office in December 2001, only three months after coalition attacks on Afghanistan, handed power to a national unity government in the first democratic transition of power in his country.

His tenure was the most challenging era for democracy and security in a country which had experienced a few decades of colonialism and foreign meddling; a country the West once turned into a base to contain the influence of the Soviet Union; a country which was bogged down for years in civil war and massacre; a country America and its allies invaded under the slogan of the war on terror in a Security Council-sanctioned operation in the wake of 9/11 attacks masterminded by al-Qaeda.

But the invasion did little to eradicate extremism in Afghanistan. The performance of Karzai during his 13 years in power is hailed by some and denounced by others. To some Afghans, he is a hero; to others he is a leader who failed to fulfill the expectations of his people.

Etemad daily’s Sara Masoumi has conducted an interview with former Afghan President Hamid Karzai. What comes below is a partial translation of the interview the daily published on February 15:

Since 2001, the international community seems to have adopted a much harsher stance on Afghanistan as opposed to Pakistan. If we make a comparison, Kabul is much safer than many Pakistani cities, yet harsh counter-terrorism measures taken by the West in Afghanistan do not apply to Pakistan. Where do you think such double standards stem from?

The West, especially the US, has goals, and naturally what they do is designed to fulfill their objectives. When America and the West decided to use religion as a tool to keep the Soviet Union in check and create insecurity around it, they took advantage of extremism.

Not only did this tactic plunge Afghanistan into misery, but as we can see it today it has spelt trouble for Pakistan and the West which have yet to stop supporting religious extremism. Even now whenever such support serves their interests, either common or individual, the West and Pakistan step in to assist extremists.

Now that you are no longer in office, you may be better able to answer my next question. Why didn’t you sign a security agreement with America while your country is still dependent on foreign forces to ensure security?

During my final years in office, I definitely concluded that the Americans were not in Afghanistan to counter extremism. Washington views extremism as a tool to accomplish its own objectives. The conflict that started in the name of the war on terror was not the war of Afghan people; rather Afghan people were victimized by that war. So in the frank conversations I had with the Americans, I clearly raised the matter. I told the Americans that if they sought to have military bases in Afghanistan, their goal had to ensure peace and security.

I was unwilling to give the Americans a military base while establishment of peace in my country was not part of their plans under the security agreement and there was no guarantee for it. If America had mapped out a plan to ensure peace or at least if it had defined the enemy we were fighting in Afghanistan, I would have signed the agreement. Today, I still believe that not signing the agreement was the right thing to do.

Do you think signing the deal by the national unity government served Afghan interests?

Although I was strongly opposed to striking the deal as long as its roadmap to peace was not clearly drawn, I remained tight-lipped. All Afghans must support their government and try to bolster it. We should set aside our disagreements and support our government.

Do you think of the Taliban as a faction you can hold negotiations with? If so, why didn’t such objective ever materialize in your government?

Individually, you can negotiate with the Taliban. As a movement, however, they have no independence, because Pakistan holds a lot of sway. We always welcome talks with the Taliban who are Afghans, yet we know well that peace cannot prevail without assistance from Pakistan.

Therefore, if both Pakistan and America seek establishment of peace in Afghanistan, it will be ensured. Nonetheless, if they do not want it, there will be no peace.

Do you think America can drag the Taliban into the peace process?

I believe that America and Pakistan can accomplish this objective together.

Why did the intervention by Riyadh in the peace process lead nowhere?

The al-Saud family made a lot of efforts and hoped that the dispute would be settled, but as I said before, this issue cannot be resolved without the cooperation of America and Pakistan.

The government of national unity reportedly seeks to redefine Kabul-Riyadh ties. A visit by the Afghan president to Saudi Arabia just a few weeks after the transition of power is indicative of such intention. Do you think a Riyadh-Kabul-Islamabad triangle can help ensure peace in the region?

Definitely! Undoubtedly, China also plays a key role. China, Pakistan, Saudi Arabia can cooperate and help peace prevail. I must repeat myself that as long as the two major factors contributing to the outbreak of war in Afghanistan, Pakistan and America, do not reach an agreement, there will be no peace.

Iran’s Foreign Minister Mohammad Javad Zarif recently paid a visit to Kabul. When you were in office, you helped establish very close and friendly ties between Iran and Afghanistan. Do you think the government of national unity will continue down the same path?

Yes, such trend will definitely go on. The Afghan president attaches great significance to Iran and cooperation with Tehran. Iran is our neighbor with which we share the same religion and language. Our ties date back centuries. Iran has a crucial role to play in Afghanistan. The Afghan president and CEO have admitted that role. We hope that they will both visit Iran shortly and the deal that we were supposed to strike with Iran is clinched soon. Iran can also play a major role in the peace process.