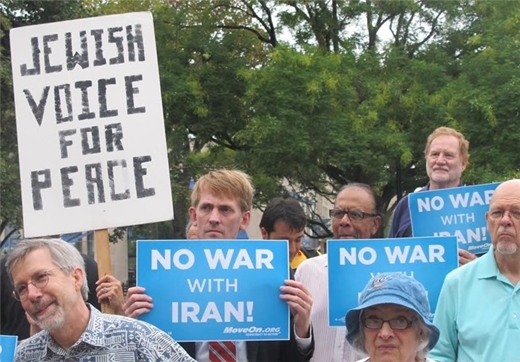 Demonstrators have held a rally in Washington, D.C after Democratic senators blocked a Republican-backed measure to kill the nuclear deal between Iran and P5+1.

More than a hundred peace activists along with leaders of antiwar groups staged a demonstration in the US capital to hail Democratic senators for blocking a Republican-backed measure to derail a comprehensive nuclear deal between Tehran and world powers.

The demonstrators held a rally on Dupont Circle in Washington, D.C. on Thursday to celebrate what they saw as a victory in averting a new war.

A Republican-backed effort to kill the Iran nuclear agreement was blocked in the US Senate, clearing the way for the deal’s implementation.

Forty Democrats and two independents voted to block a resolution disapproving of the pact in the 100-member chamber, one more than the minimum needed to keep it from advancing.

The Dupont Circle demonstration was one of the 130 gatherings in support of the Senate Democrats who backed the Joint Comprehensive Plan of Action (JCPOA), according to Ben Wikler, the Washington director of MoveOn.org.

The rally also brought together demonstrators from other groups such as Ploughshares, Network Organization, Democracy Partner, Peace Action, Code Pink, and Jewish Voice for Peace (JVP).

With the 42 Democrats that voted in favor of JCPOA on Thursday, US President Barack Obama achieved perhaps the greatest foreign policy victory of his more than six years in office.

Under a law Obama signed in May, Congress had a 60-day period ending on September 17 to pass a resolution disapproving JCPOA.

If such a resolution were to pass, and survive Obama’s promised veto, it would bar the president from waiving many US sanctions on Tehran, a key component of the nuclear deal.