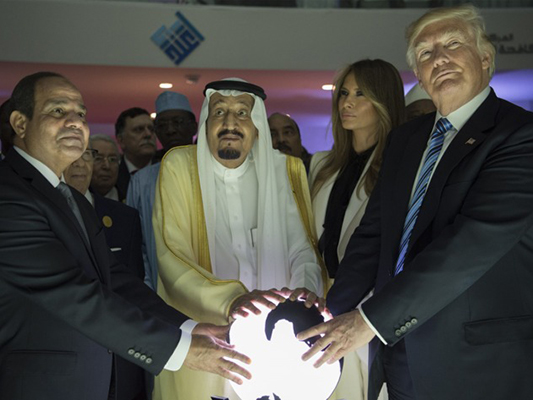 An Iranian newspaper says the US is distracting the world’s public opinion by ‘pretending’ to be against the nuclear deal between Iran and the P5+1, while hatching plots with the EU to make the most profit out of Iran’s lucrative market.

Jame Jam newspaper, in a report published a couple of days ago, has weighed in on the latest anti-Iran rhetoric by US President Donald Trump and the objectives behind the remarks. In this report, the newspaper claims the US and the European Union have jointly hatched a plot to change the grounds for achieving further economic gains from Iran’s lucrative market following the lifting of sanctions as per the nuclear deal between Tehran and world powers.

What follows are excerpts of the article:

The Art of Distraction

Professional jugglers have a trick named the art of distraction. Through this trick, they deceive their audience by distracting their attentions from the main part of the juggling operation.

Now Trump’s recent speech made after weeks of media hype over its content seems to be a trick by him to distract the global attentions from an important point. A review of the reactions pouring in to the US’s new strategy towards Iran nuclear deal reveals that he has managed to distract the world from a main point: Behind the scene cooperation between the US and the EU to change the JCPOA in their own interests.

Trump made his main point not during his speech, but 30 minutes after it in an address to the White House reporters; however, this point was not noticed in Iran.

Following his anti-Iran speech, Trump addressed reporters in the White House and in response to a question on his talks with his European partners, he replied the Europeans want him not to pull out of the JCPOA.

Trump said he told his ‘friends’ Macron and May to ‘take all the money you can get’ from Iran and ‘don’t worry’ about US sanctions. According to Trump, the Europeans make the most profit from the huge money Iran spends in other countries.

“Emmanuel Macron called up and he talked to me. And I said, look, Emmanuel, they just gave Renault a lot of money. Take their money; enjoy yourselves,” Trump said. He was making reference to the French car manufacturer Renault’s $780 million agreement with Tehran.

If the JCPOA is implemented completely, Iran will be the economic winner of the deal because it will have the upper hand against the interested European investors. So, Iran can set the conditions for the investors and decide which interested investors enter the country first. This means that the Europeans’ plan for investment in Iran may not come true as they expected.

To change the grounds based on their own interests, the EU and the US have adopted a smart strategy consisting of sanctions and threats to not only limit Iran’s military power but also take the most advantage of the JCPOA economic opportunities.

Despite its commitments under the JCPOA, the US is indirectly warning its economic partners against establishing any economic relations with Iran. The new strategy will dissuade international companies from investing in Iran.

Under such circumstances, the companies that dare to invest in Iran will have the upper hand in talks with the Iranian government because they can set conditions for Iran and expect Tehran to accept their conditions under pressure from the US.

Meanwhile, Iran will praise the Europeans for their courage to defy US pressure. A brief review of the lucrative oil deals signed between Iran and French company Total as well as French carmakers and other deals signed with the German and British companies raises a question: why are the Europeans happy with the current situation?