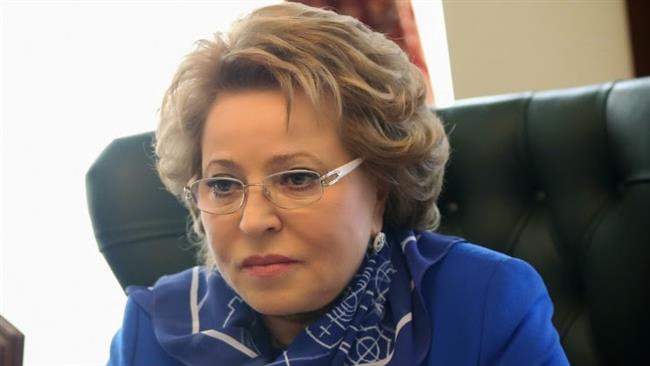 The chairman of Russian Federation Council’s defense and security committee, Viktor Ozerov, and a number of parliamentary officials and members of the council are accompanying Matvienko in her trip.

Speaking to IRNA in Moscow ahead of her departure, the top Russian parliamentarian said she would bring up a variety of issues in the talks with Iranian officials, including ways to improve parliamentary cooperation and reinforce convergence in the Middle East to fight terrorism in Syria.

She added that the two countries’ presidents have at many times stressed the importance of bolstering cooperation and noted that Tehran and Moscow have taken positive steps and made great achievements in this regard.

In a meeting in the Azeri capital of Baku on August 8, Rouhani and his Russian counterpart Vladimir Putin called for accelerating the development of bilateral relations in all fields.

Back in July 9, 2015, the two presidents also held a meeting in Ufa, Russia, and exchanged views on ways to broaden bilateral cooperation in the fields of military technology and nuclear power.

Matvienko’s visit to Tehran comes after the Russian president traveled to Iran on November 23, 2015 and held separate meetings with Leader of the Islamic Revolution Ayatollah Seyyed Ali Khamenei and President Rouhani. Putin also participated in the third summit of the Gas Exporting Countries Forum (GECF) in Tehran.